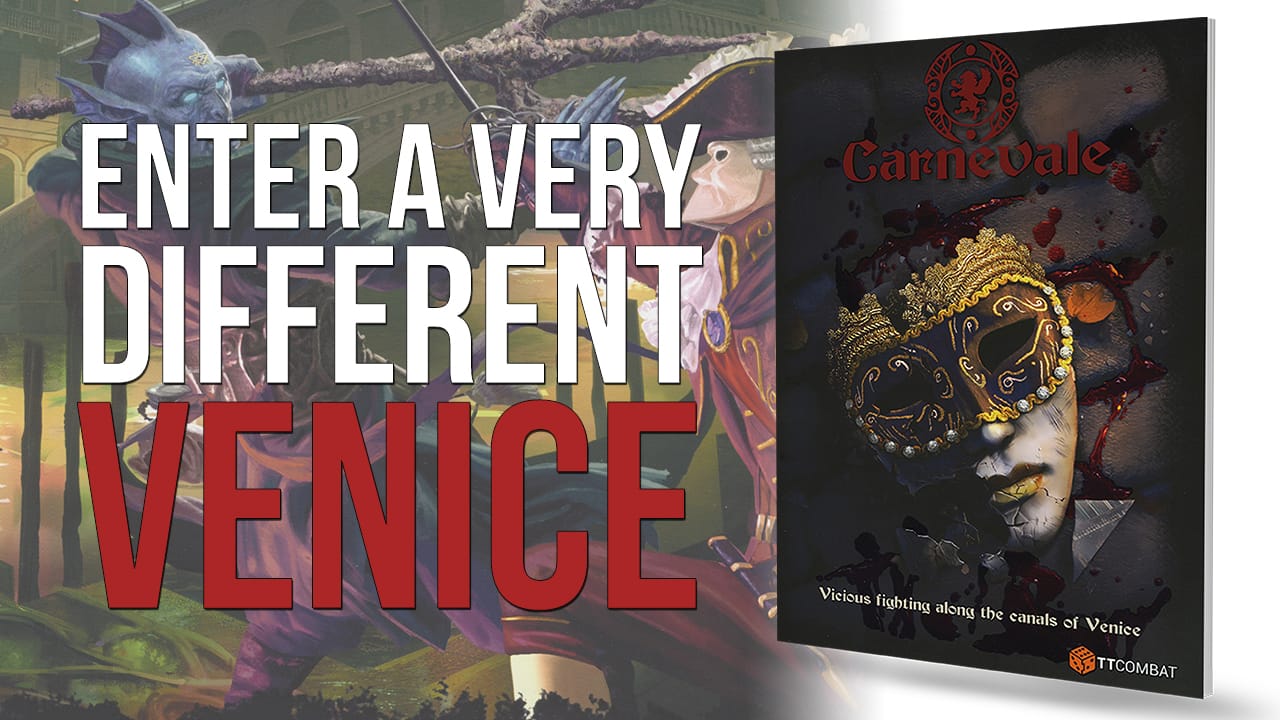 Since TT Combat picked up the Carnevale miniatures game licence, they have pushed forward to create a 2nd edition of the rules and a host of new miniatures. The game is part fantasy, part reality, set in a version of Venice that is full of intrigue and back alley fighting.

Upon lifting the box lid, the first items you discover are a series of self-assembly card buildings and terrain items in the Venetian style. These are printed in full colour and simply need to be folded to create building ‘boxes’. There are 16 buildings in total, coupled with six sets of steps or bridges to span the canals.

Beneath the card buildings lies the 240-page Carnevale rulebook, a gloriously full colour printed book complete with photographs of painted miniatures and wonderfully evocative artwork. The first 150 pages of the rulebook offers a full introduction to an alternate 1795, where a great apocalypse has hit Italy and much of the Mediterranean region, leading to the re-emergence of Venice as a major player and the seat of intrigue, skulduggery and magic within the world. Into this city come the characters, organised into ‘Gangs’ of different nations and factions who battle one another over feuds, secrets and other agendas.  The game rules themselves are easy to understand and are laid out in a clear, simple style with plenty of examples both textual and visual.

A white cardboard box contains three small bubble wrap bags of resin miniatures. These represent various human characters from different backgrounds, a small gondola-type boat and mooring poles, and a group of different magical monsters that wouldn’t look out of place amidst the writings of HP Lovecraft. Alongside this, a large Ziploc bag contains bases, templates, an initiative marker and 12 ten-sided dice, including two translucent and ten black.

Returning to the paper-based contents, we have a Quick Reference sheet, a Character Abilities aide memoire and small booklet designed to act as an introductory campaign to the world of Carnevale, with a series of scenarios that may be played through to help to try out various rules. Next comes the character cards to used during gameplay, each one matching with the miniatures in the starter set. Finally, we have nine double-sided cards which can be laid out on the tabletop as a gaming surface. These can fit together in a number of configurations to create a variety of maps.

This is an interesting looking game with a detailed and intriguing background. The starter set has everything you could ask for, and some really useful cardboard buildings which aids in re-creating the canals and streets of Venice. Being masters of lasercut MDF, TT Combat offers replacements for the card terrain in the form of an excellent series of MDF-based building kits which would grace any gaming table. Beyond perhaps the outer box itself, the quality of each component inside is high, making this a game rich in background with simple gameplay and plenty of opportunity for adventure.