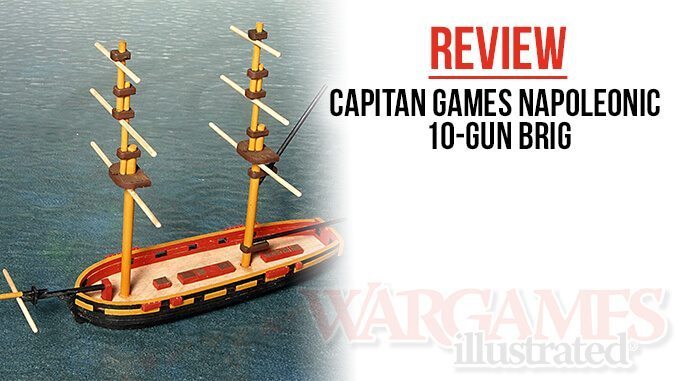 The 10-gun Brig is from a range which currently features fourteen Napoleonic sailing ships; from a British gunboat for just £3.85 to a magnificent 74-gun 3rd Rate for £55.00. They have been scaled to match 10mm figures so not only can you fight out ship-to-ship battles and boarding actions within a practical playing area, but you can also incorporate attacks on land-based enemy forces or installations.

All of the models are finely crafted from laser-cut 3mm Baltic Birchwood. Lately I’ve built quite a few laser-cut models, usually from mdf, but this was the first where the sheet of parts had a self-adhesive clear protective sheet on both sides. And the reason was that the very accurate laser-cutting was done so well that without the protective sheets most of the components would have fallen out, which was a definite improvement on many kits around that are supposedly ‘cut’ but on which you have to lavish considerable care and attention to ease them out, often damaging parts in the process. Pre-cut masts and yards are included in the kit, although possibly swapping the yards supplied for smaller diameter ones, perhaps using lengths of bamboo from an old roller blind, might be more aesthetically pleasing albeit at the risk of making the model slightly less sturdy. Instructions for the models are in the form of a comprehensive pdf file which you simply download from the Capitan Games website: http://www.capitangames.com/gunboat/ships-instructions/. It’s a good idea to download these anyway because it shows you how easy all the models are to construct.

PROS: Very simple assembly results in a good looking and sturdy model that should be more than capable of withstanding normal wargames handling. I have to admit that I really enjoyed making up this model and anticipate many happy hours, if not years, of wargames use. And if you want to create a more detailed model, this kit provides an excellent starting point. The 10-gun Brig is only £16.50 so represents very good value for money too.

CONS: This is not an accurate scale model, but there again, it was never intended to be… after all, how long would a fine scale model survive on the average wargames table? Rather its a wargames model, which is clearly identifiable as a particular class of sailing ship, designed to stand up to regular handling, and for figures and ordnance to be easily removed if required to represent casualties taken and damage sustained.

The company’s very successful design philosophy is to provide kits to a good wargames standard, but with the potential for wargamers or modellers to enhance them further to create more detailed and individualistic models if they wish. For example on one of my models I added a jib boom and a spritsail yard, although I drew the line at adding a dolphin striker; far too fragile for wargames use!

Assembled model with added a jib boom and a spritsail yard

Assembled ‘as is’, the brig makes up into a very good looking model, more than sturdy enough to withstand all but the most careless of handling. The model does not include sails, because it would be impossible to create a ‘one-size fits all’ template, and its arguable that sails could get in the way if your game system requires you to physically remove crew or guns to show damage sustained. That said if you want to add sails, they’re easy enough to make using thin cream coloured paper. If you decide to add any rigging, I’d suggest that ‘standing rigging’ should be the minimum, not least because it will strengthen the model.

So, overall, an excellent model with lots of potential… and I’ve already been casting my eyes over the Capitan Games website… their 74-gun 3rd Rate looks very tempting indeed!