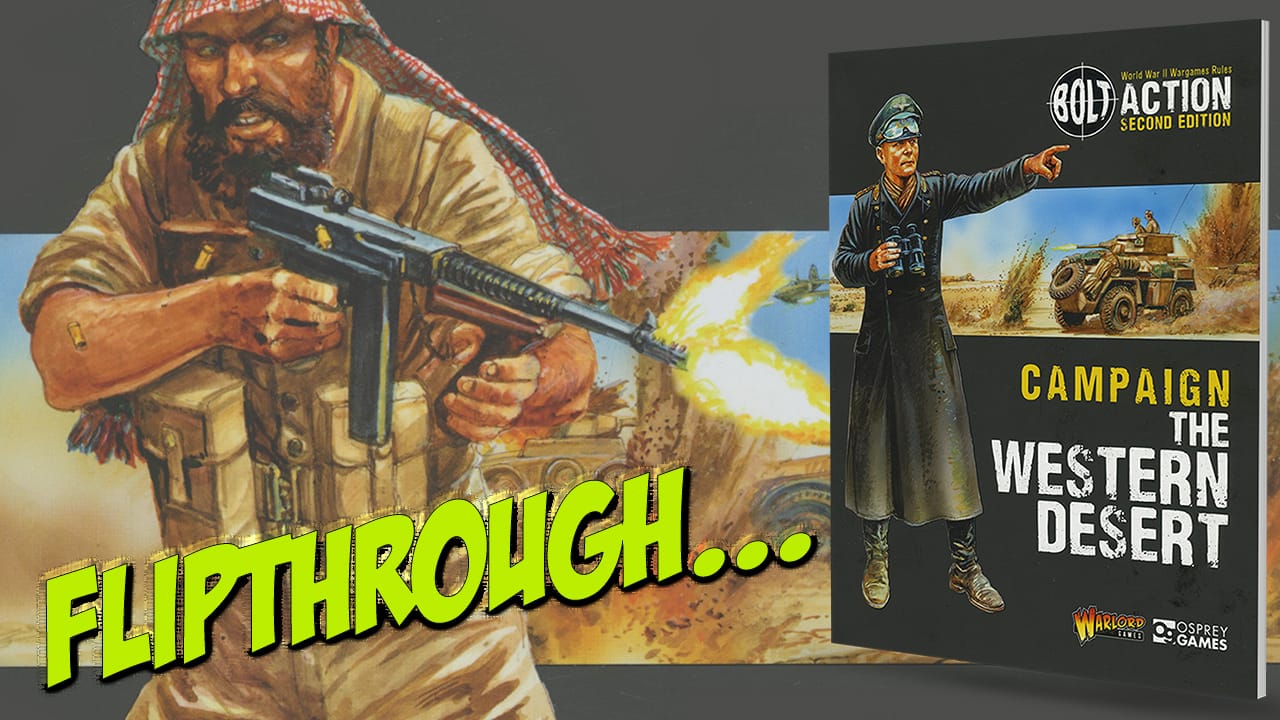 The latest supplement from Warlord Games for their Bolt Action rules is Campaign: The Western Desert. It charts the progress of the operations which took place in North Africa from 1940 until 1942. This was a swirling, active front during this period, where men and machines from many nations fought not only one another but also the harsh climate of the region itself.

The rulebook begins with a brief but useful introduction to the actual events, then plunges straight into a number of historically based battle scenarios. These range from the types of encounters of the early part of 1940, such as Operation Compass, the British plan to engage the Italians, through tank clashes around Tobruk, the arrival of the Afrika Korps in 1941, the first Battle of El Alamein, and on into 1942. Maps, special rules, objectives and the historical aftermath of events are fully outlined, making each scenario not only simple to game but providing a sense of historical relevance. Having outlined the main operations and the more large-scale battles, the 18th and 19th scenarios are more focused on two raiding scenarios, reflecting the types of operations undertaken by British and Commonwealth Special Forces, again with special and optional rules.

As always with a new supplement, there are new units for each of the combatant forces, including for British and Commonwealth players, a new set of stats and information for Italian players, and a wealth of new German organization tables and vehicles to represent the Deutsche Afrika Korps.

To cover the changes which took place to each force during the period 1940 to 1942, the Theatre Selectors cover the options and special rules to enable players to field forces for each of the main armies. By simply picking a year, players can construct a ‘typical’ infantry, armoured and anti-tank platoon. There are also rules for fielding a particular part of the Commonwealth component of the British forces, with national characteristics for Australian, South African, New Zealand and Indian themed units. The rules also cover how to field Division and Brigade level forces as defined by the Bolt Action rules.

A nice touch is an entire section devoted to fielding Free French units. This includes Army Special Rules, a full table of organization, points values and options for various units and platoons, plus details of unique weapons and equipment that were used by these hard fighting heroes.

To add even more options for the gamer, there is a section which covers the various Special Forces which operated in the Western Desert campaign. The various British and Commonwealth units are covered in some detail (the classic Long Range Desert Group and the Special Air Service) but there are also the Italian Compagnia Sahariana rading units and Kampfgruppe Hecker, a unit of Brandenburger commandoes which supported the Afrika Korps.

Finally, there are a number of Heroes outlined for each army, and a set of special rules designed to reflect the nature of combat in the harsh and unforgiving terrain of the Western Desert. The use of special tactics and defensive positions are also covered, as too are the use of minefields designed to deny ground to the enemy.

This new Bolt Action supplement is packed full of rules and organizational information to help create units and new tactical challenges for gamers. However, there are also some useful pieces of historical information that brings the nature of the war in the Western Desert into sharper focus for the new and veteran gamer alike. Most importantly, the layout of the book, coupled with the level of written content, allows the gamer to easily access the information presented within.