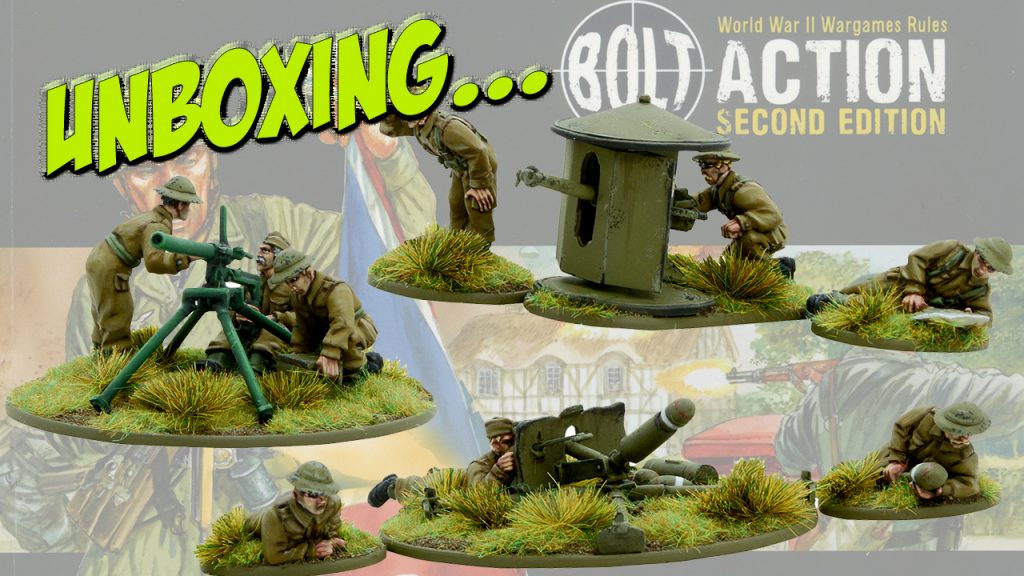 Many of the new Bolt Action figure releases over the next few months will be themed around the Campaign: Sea Lion supplement. We visited Warlord Games and got our hands on as many as we could!

Our first pack is really intended to come in a boxed set themed around the LDV or Local Defence Volunteers. This organization was the precursor to the Home Guard but still existed as a supporting force in the event of invasion. Plucky Brits were encouraged to arm themselves with whatever they could get hold of and take to the streets to, as Churchill himself stated, “Take one with you!”.

The set consists of ten miniatures in a variety of different clothing, from old military uniforms and some items of kit to late 1930’s /40’s. Three of the figures are armed, two with shotguns and one with a rifle. The ‘officer’ in uniform is reaching for a weapon in his holster. The other six miniatures are cast with their right hand ‘missing’. This is so you can choose your desired weapon from the three sprues in the set.

You can choose between Molotov cocktails, axes, crowbars and a sledgehammer for anti-armour work or hand weapons such as a hammer, large spanner or a truncheon. By far our favourite is the ancient looking blunderbuss, no doubt charged with black powder and as many nails, sharp stones or pieces of broken glass as can be found. Marvellous!

The next three packs are typical of the support weapons available to British forces after the fall of Dunkirk. There is a Spigot Mortar, also known as the Blacker Bombard, a Northover Projector, the last black powder weapon officially issued to the British Army, and the Smith Gun for use by the Home Guard. These are weapons which were adopted to fill the urgent requirement for anti-tank and anti-personnel weapons during the post-Dunkirk period. Some saw limited active service and others were never fired in anger, but the fact that they existed at all boosted the morale of civilians, Regulars and Home Guard units alike.

The final release we have for the Sea Lion supplement this time is the Mark III Armadillo, a resin and metal kit representing one of the many solutions offered to defend key points, especially airfields, from ground attack. The Armadillo consisted of a wooden fort on a lorry chassis, with the cab protected by steel plates. The Mark I and II vehicles had riflemen and Lewis guns as their main armament but the Mark III sported an fairly obsolete naval weapon, in this case a Hotchkiss 3-pounder clip-feed cannon which is included in the set.

These first releases related to the Campaign: Sea Lion supplement are up to the usual high standards one can expect from Warlord Games. The rules to incorporate these units into your Bolt Action games are of course in the new book. There are many more releases to come in the next few weeks and months and, if they are up to the same standard as these, we can’t wait to see them.