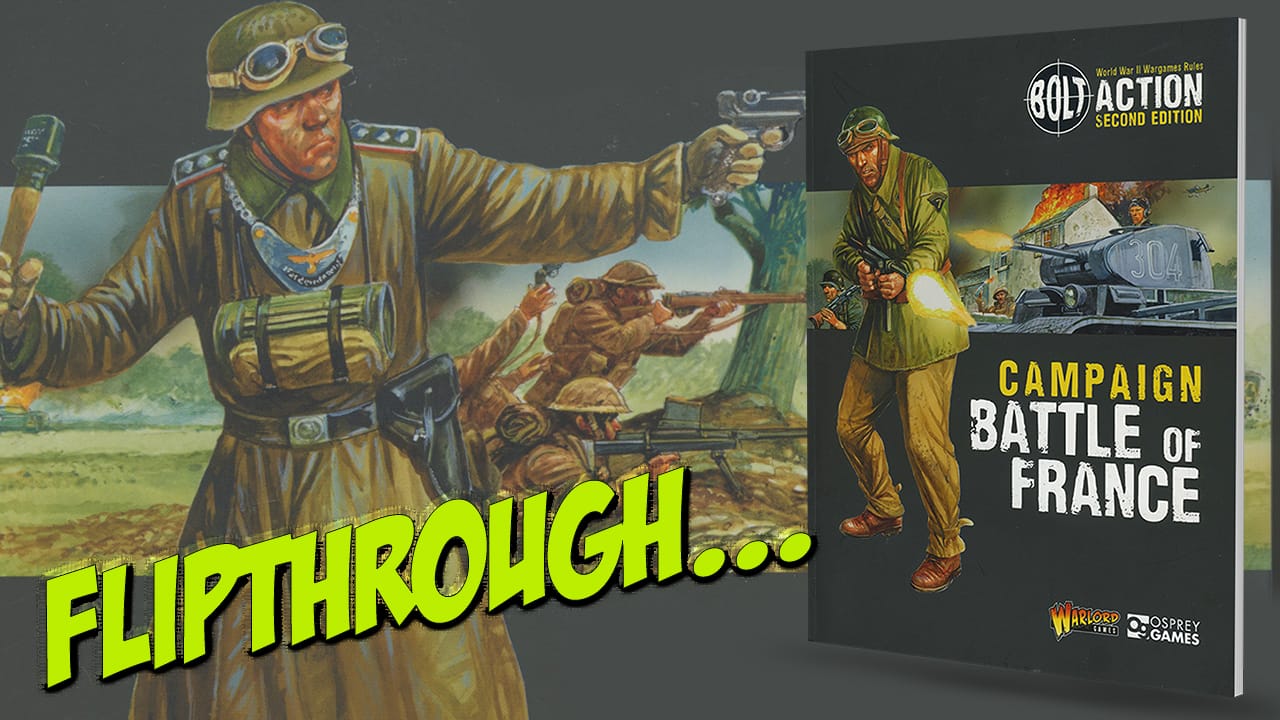 The upcoming release of the new Campaign: Battle of France supplement for Bolt Action offers 128 pages of scenarios and more for gaming Early World War Two in France and Belgium during the Summer of 1940. This is a softback book, providing special rules, amendments and suitable army lists for gamers.

This softback book begins with something of a disclaimer, quite rightly pointing out that this isn’t a history book. It then presents 12 fully detailed scenarios, each one complete with a really useful overview of the historical events before and after each one, adapted from the reality. These can be played as ‘one offs’ or linked together to create a mini-campaign. The type of scenario ranges from small-scale recon platoon contacts up to full on battles, counter attacks, protecting the ever collapsing perimeter and the final evacuation from the Dunkirk beaches. There are also less ‘obvious’ fare, such as an attack on part of the Maginot Line and the ill-fated invasion of France by Italian forces.

The New Units section contains something for all the protagonists, from extra options for the Belgian Chasseurs Ardennais to British Pioneer Corps and Intelligence Sections, Royal Engineers, French Naval units, French Cadet sections, Fifth Columnist units who aid the German invasion and the feared and hated Feldgendamerie or German military police. There are also new rules and national characteristics for different intelligence units, and even War Correspondents.

A number of Special and New Rules are included in this supplement. As well as rules for digging in, the many types of minefields are covered, as are amphibious assaults. There is also a whole new section of rules called Air Battles, allowing for the integration of fighter and bomber combat into the game. These include the role of ground attack and air defence. Another set of unique rules is entitled Company Commander, which expands the basic Bolt Action Platoon level combat to the next level, that of the larger Company with more than one platoon. In a very real sense, these could be said to be a major ‘expansion’ to the infantry combat rules, as are the rules for aircraft. These seem to be refined and expanded versions of previously existent rules, possibly based upon the author’s beliefs and ideas, as are the rules for Campaigns found herein.

This is an obvious choice for Bolt Action gamers interested in gaming this particular part of the Early War in France and Belgium. The inclusion of new units, army and theatre selectors, the special rules and army lists are all useful for the general BA gamer. The historical content is here, and it’s interesting to see how the history has been adapted to fit the rules system in terms of the scenarios.