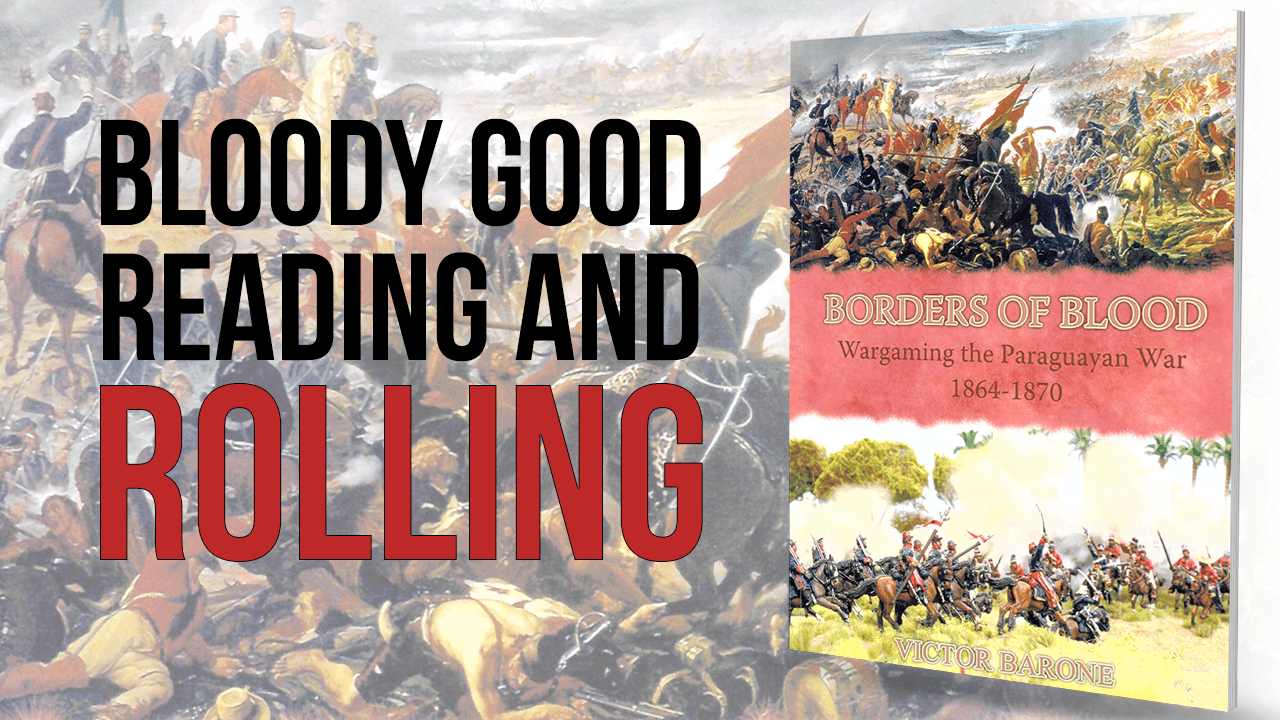 Anyone who has bought it to Perry Miniatures newest range of figures; those for The War of the Triple Alliance, we no doubt be very interested to hear of the release of ‘Borders of Blood’ written by Brazilian Victor Barone and published by Caliver Books.

Subtitled ‘Wargaming the Paraguayan War 1864 – 1870’ anyone vaguely familiar with this conflict, the largest ever in South America, will know it goes by a number of titles. The Paraguayan War and War of the Triple Alliance being the two most common.

Having established that these rules and the Perry Miniatures figures range dovetail nicely let’s take a look inside this 72-page, softback, full-colour book.

The basic necessities and nuances of the rules are presented to us immediately, and we are informed that the game uses D6s and Action Cards – to provide random and characterful events.

There then follows a four-page summary of the conflict. It’s clear from this that English isn’t the author’s first language, but as you make your way through the rules you will conclude that this isn’t really a stumbling block to your learning.

The rules proper begin on page 11 with an introduction to how a miniature army should be formed. It’s worth lingering here to take in the information that we are dealing with 28mm figures and an infantry battalion (representing around 500 men) should be formed of 24 miniatures, on 6 40mm square bases with 4 figures on each.

Although not overtly stated, this amounts to each infantry figure being on a standard 20mm square base, with cavalry mounted on standard 25mm x 40mm ‘horse bases’. The example photo on this page shows the figures mounted in movement trays, which is no doubt what most players would do to present their figures ready for a game of Borders of Blood.

In the Characteristics of ‘Battalions, Squadrons and Batteries’ chapter, we encounter several standard wargaming convention rules when it comes to troop quality – Elite, Regular, and Recruit – and Formation – Line, column, March Column, Square, and Skirmish. Attack Dice are also introduced at this point. These are assigned to a battalion of figures and used for carrying out actions during the game

Morale, and Damage Points, aka hits, are also introduced at this stage. Infantry Battalions can take 4 Damage Points before they are destroyed.

Army Generals and subordinate commanders i.e. Colonels are also covered here, with their rules being familiar to any big battle wargamer.

In ‘The Turn’ we get to the nub of what Action Dice are all about. Anyone familiar with DBM and its derivatives will be familiar with the system; it’s akin to PIPS.

Battalions and squadrons are assigned an Action Dice following an IGO-UGO formula, with the number shown on the Action Dice translating to what number actions that unit can take. A maximum of  6+ Actions will allow the unit to take two moves and shot, or recover morale and move.

The most significant thing to highlight in the Movement section is the speed at which units move – 12” being a standard line infantry move and 18” for cavalry – so that’s pretty rapid movement, especially on a 6’ x 4’ table.

Terrain and Movement covers all the standard fair concerning reducing movement for Difficult Ground etc., whist some interesting conflict specifics are introduced in the form of dealing with the Paraguayan swamps or Esteros.

Formations are covered over the next two and a half pages – all familiar ground for any big battle wargamer.

Confirming what any student of the Paraguayan War already knows, the Melee Combat chapter begins by telling us that “melee weapons were used extensively in hand to hand combat. Bayonets, machetes, daggers and spears were issued to all battalions, and made hand-to-hand extremely violent and deadly”.

Melee incorporates the well-established two throw of the dice system, the first throw to hit, the second to save.

Modifiers come in the form of dice being added to the hand.

At this point in the rules, there seems to be a glaring omission, there is no mention of how many dice are thrown by the attacker or defender, before “modifications to the attack dice” are added! Or at least not overtly.

Useful examples of play are included throughout the book, and in the example under “How Melee Combat Works” it implies the player gets one attack dice per “group” in the battalion. Unfortunately, the photo doesn’t really help, as this does not match the text.

We are therefore assuming one attack dice per group and pressing on regardless. It’s frustrating to have to assume a rule, but there we are.

When successful hits become “damage” they are recorded via dice or tokens being placed next to a unit, with a total of 4 damage taking out a group.

The melee section concludes with some notes on unit facing and generals.

Firing is a very similar process to Melee, and early in the Firing section it is categorically stated that “each group composing the battalion or squadron add 1 die to their Attack pool.”

Again, like hand-to-hand combat, modifications are made in the form of dice being added to or subtracted from the pool of those thrown to hit, and this is followed by a ‘protection roll’ to save. A 4+ being the key number required on both occasions.

It’s worth noting gunfire ranges here. Your bog-standard musket can fire a maximum of 20 inches – so that’s comparable with Black Powder.

Applying hits is done in the same way as in Melee combat.

This similarity between the two systems is quite striking – I can’t think of many games where hand-to-hand and shooting are so similar – this will make for an interesting appraisal during play i.e. the benefit of fisticuffs over firing.

Artillery is covered over the next six pages, and we’re going to rush through that fairly swiftly because there’s nothing too noteworthy in here – it uses the same Attack Dice system as small arms fire. We should just point out that the maximum range for a smoothbore 12 pounder is 47 inches – again very close to the 48 inches in the Black Powder rules. Oh, and rockets are covered in this section too.

Morale Testing (made with the roll of a D6) is covered on page 39, along with the rules for Action Cards – these are random cards handed out to, and used by, each player, each turn.

We then have two pages dedicated to “Battle Points” – which provide points per unit system for “buying combat units”.

Historical characteristics of the Armies

We then move on to “Historical characteristics of the Armies”. This is a welcome bit of Paraguayan War specific info which helps you build armies based on the historical facts of the conflict. Covering unit and weapon types, along with the quality of over 30 commanders from the four nations involved in the war.

The rules’ historical tie-in continues into the next, and we think the most valuable, section of the book – “Army Organisation”.

Over the next 11 pages, you will find diagrams of army structure, unit rating tables, and some excellent Alan Perry uniform guides for the Paraguayan Army, Brazilian Army, Argentinean Army, and Uruguayan Army. This really is an excellent section of the book, providing lots of tasty wargamer friendly information plus inspiration photos of figures courtesy of Perry Miniatures.

On page 55 we have some rules and suggestions for setting goals, or objectives, in your games, plus deployment, and the most commonly ignored rules in wargaming – weather or climate.

If you are the Paraguayan player, you will probably be keen to ignore them again here, as a roll of 11 -12 will basically mean you have lost the game before you begin.

From here we are into the scenarios section of the book. We are provided with two, firstly for the left flank action in the battle of Tui-uti – The Waterloo of South America (apparently). Secondly for the right flank action at the 1866 Battle of Curu-paiti.

The book concludes with, two pages of Action Cards – designed to be scanned and copied and add characterful random events to the game. An army rooster sheet for tracking units and points. And finally a useful quick reference section.

So there you have it – Borders of Blood is a well-presented set of wargames rules, specifically for Wargaming the Parguayan War of 1864 – 1870, dovetailing almost exclusively with the War of Triple Alliance figure range by Perry Miniatures.

Rulesets can either offer something so intriguing, inspiring, or unique that they cause you to venture into a new period – think SAGA, Sharp Practice, or Frostgrave – or they offer a service to gamers who are already ‘into’ a period or conflict. Borders of Blood is definitely a solid entrant in this latter category.