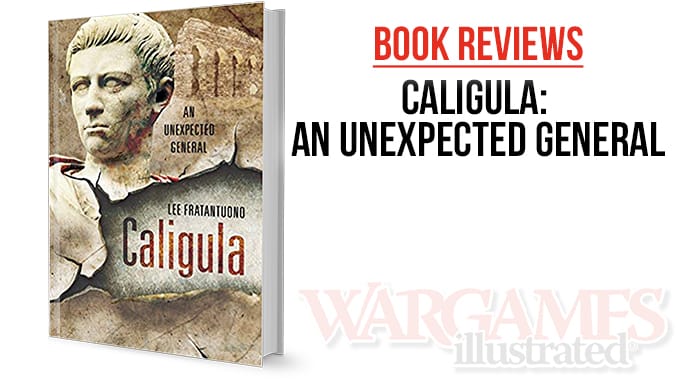 According to the famous maxim of Helmuth Von Moltke, no plan survives contact with the enemy. Thus it stands to reason that the absence of an enemy makes for perfectly executed plans. The only recorded military action of the titular general is ample evidence that this holds true, but it is arguable whether one ‘successful’ campaign against an absent foe is enough to label Caligula as a general, unexpected or otherwise.

Nevertheless the declared authorial intent is not rehabilitation of Caligula from his reputation as pervert, sadist and all-round madman, but rather to consider the seemingly unlikely possibility that his generalship and military acumen were more refined than his biographers and historians might allow. Fratanuono dissects Suetonius, Tacitus, Dio and Josephus in good scholarly fashion. Comparisons to the rational but savage Joseph Stalin are made and are not wholly inaccurate, although the sources lean far more towards demonstrating domestic savagery than brutally efficient foreign policy.

The colour plates are mostly (admittedly picturesque) landscapes relevant to the text but not really to the gamer. Maps, ORBATS and other organisational information must be sought elsewhere.

There are some potential wargaming hooks. It isn’t hard to envisage the effetely dangerous John Hurt of the iconic BBC series ‘I Claudius’ with a decadent entourage of gladiators and whores, directing legions from a litter borne by slaves or humiliated senators, depicted in miniature, and rules to reflect his capricious nature might be entertaining. Vicious skirmishes on the Palatine between Batavian bodyguards and prospective Regicides (though the emperor might prefer the term Deicides) are another possibility. For the more whimsical gamer, there are at least three ranges of miniatures with a fantastical aquatic theme on the market, so consideration could be given to what might play out when Caligula orders his legions into battle formation, ballista et al, to plunder the Dutch coastline of shells and the ocean rises to the challenge.

Overall, this is an interesting volume, a good study of the sources and a meticulous unpicking of some lesser known pieces of evidence, but in summary, not a great deal to recommend it to the wargamer as a material source, and it is debatable if Fratantuono achieves his aim.