Caesar In The Gaul 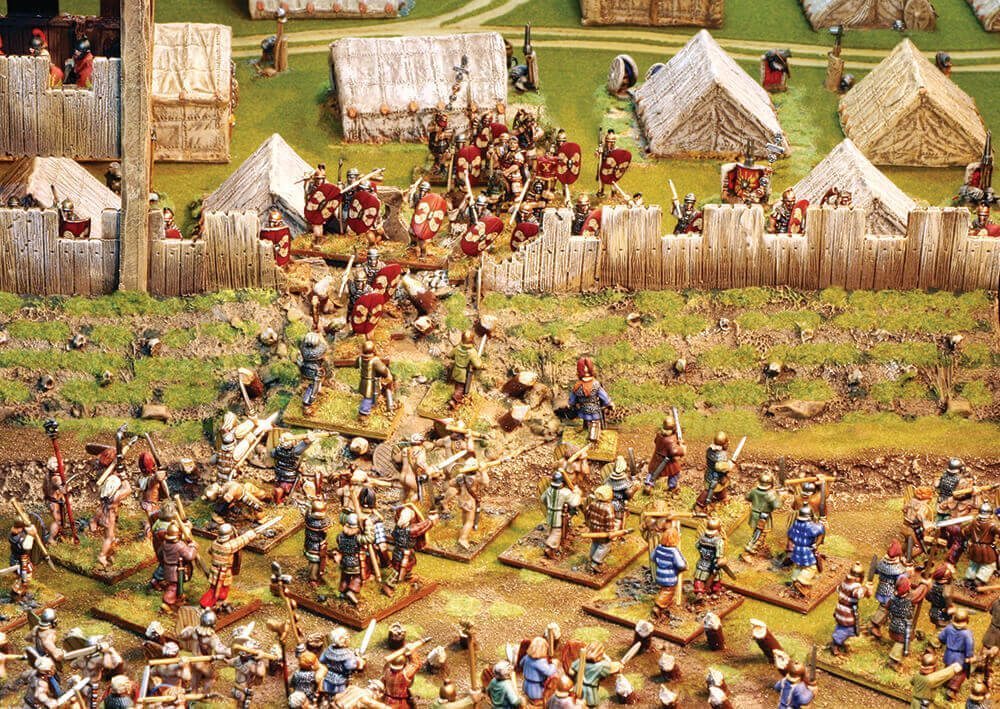 The July 2016 issue of Wargames Illustrated features the theme ‘Caesar’. To accompany it’s release we thought you might like to read the article below which was first published in WI 262, August 2009. WIPrime members will find several more Caesar related articles in WI 262, along with at least half a dozen more Caesar articles via The Vault – just search for ‘caesar’.

It was April, 46 BC and the venue was Rome, not quite yet the center of the world although well on its way to being so.

The event was a Triumph such as the Romans had never before seen; twelve days of celebrations; horse-racing, music and arts contests; demonstrations of combat, including cavalry and an elephant fight with twenty elephants on each side; a naval battle; and, a huge triumphal procession through the streets full with awestruck Roman citizens. The procession’s highlights were the traveling pictures depicting twenty defeated enemies of Rome, and the 65,000 talents and 2,800 pieces of gold that would be distributed to the soldiers and people as had become the custom. This was Julius Caesar’s Triumph, his homecoming from over a decade of bloody war that ended with the melodrama of Cleopatra, but began in the savage landscape of Gaul.

It is important to remember while following Caesar through his Gallic campaigns that Gaul was not the set of lines on the map designed by 19th century nationalist fantasists, but a culture shared by many disparate tribes of various sizes who spent as much time fighting each other as they did shared enemies. When the occasion demanded, the tribes came together in defensive alliances or to launch grand raids on neighbouring powers. One of the earliest recorded incursions was that against the Romans in 390 BC that devastated the small city of Rome and made the Gauls the bogeymen of Roman children for the next 340 years. Later invasions reinforced that message, but Rome was ascendant in the interim and increasingly becoming involved in the affairs on her northern border.

One of the great debates in classical history is the nature of Roman imperialism – whether the Romans aggressively pursued Imperial ambition, or if it was foisted on them by circumstance. Whatever angle is taken on that, one thing is certain; the Romans justified their interventions and almost always supplied an excuse for their military escapades. That was true of Rome’s actions in Gaul.

Many Gallic tribes were always reluctant to accept the Roman yoke, but combined efforts were few and far between. Grand Manner buildings, Gripping Beast figures.

The Gathering Crisis – 1st Century BC

The Romans’ stature in the first century B.C. was such that Gallic tribes came to see them as either powerful allies or hated enemies, the latter being true the further away the tribe’s capital from the Mediterranean and Roman and Greek cultural influence. When a tribe split into pro and anti Roman factions, the Romans felt compelled to intervene; thus, it was political dissension in the Aedui tribe that lit the touch-paper for Rome’s conquest of Gaul and the massive upheavals that followed. The pro-Roman faction in the Aedui appealed to Rome for help in 71BC when under the threat of the Arverni, but Rome did not help and the Arverni swept through the Aedui and began to exert pressure on the nearby Helvetii. If Rome did not do something to help stabilize the situation, a “domino-effect” was inevitable with tribal displacement causing widespread war across Rome’s northern frontier. The other problem invoked by Rome’s failure to support the Aedui was that she now looked weaker to the Gallic tribes, and some may have seen this as an opportunity to fight back against Roman expansion and carve out their own hegemony.

The Romans again failed to support the Aedui in 61BC and the crisis deepened. The situation percolated a while longer, but a new man was coming who would take a very different tack to the problems in Gaul: Julius Caesar.

Gauls swarm over the defences of a Roman camp, determined to oust the invaders.

The Rise of Caesar

Julius Caesar was born in 100BC into a noble but undistinguished family. That circumstance almost pre-ordained him to following the highly structured political-military career common to his class. Caesar did not have the family wealth or influence, however, to compete on a level playing field with some of his potential competitors in the political marketplace; therefore, he would have to build up a base of support in the army and citizenry, using money and patronage to further his political ambitions. In addition, Caesar would need a provincial governorship to reach the highest offices, which in turn would provide the wealth he needed to complete his rise to power. All of that coincided with the Roman Republic undergoing revolutionary political, economic, and social change.

Caesar first came to military prominence in his twenties when he crushed Mediterranean pirates who had previously captured and ransomed him. Then, in 74 BC, he raised a private army to fight against Mithradates VI Eupator, the king of Pontus. With that accomplished, Caesar got down to building his political career; he became quaestor in 68, curule aedile in 65, pontifex maximus in 63, then praetor in 62. Scandal and debt issues appear to have followed Caesar, however, and he ‘got out of town’ in 61, going to Hispania Ulterior as Governor. While there he led a successful and lucrative expedition that allowed him to return to Rome in good standing. The next year, he stood for Consul for 59 BC, and that would lead him to become the pro-consular governor of Cisalpine Gaul. Depending on your opinion of Caesar, he was now in the fortunate position of being able to wage aggressive war against the Celts in the rest of Gaul, or he was unfortunate to be a governor in a province bordering a region that was about to be plummeted into deep upheaval.

Caesar crushed the Helvetii, and followed up with a devastating campaign against the Germanic leader Ariovistus in 58BC. The following year saw Caesar on the Atlantic coast subduing the Belgae, while his adjutant Publius Crassus conquered the Gauls in what is now Normandy and Brittany.

Caesar’s initial campaigns raised a few issues not commonly seen in previous Roman conquests, mostly against well-organized and established states based on the Hellenistic model. First, Gaul was part of a Celtic world that proved amorphous, so Caesar was compelled to launch expeditions across the Rhine and into Britain in 55 and 54 to suppress support coming from those areas. Second, the constantly shifting alliances among the tribes in and around Gaul meant that rebellions and revolts could spring up almost anywhere, and Caesar spent much of his time in Gaul putting down resistance sometimes in the most brutal fashion.

In 52BC, the Gauls found a leader, Vercingetorix, who could unite them in a broad confederacy. That would lead to the siege of Alesia, described elsewhere in this edition of Wargames Illustrated, and the final subjugation of Gaul. Caesar spent the next two years putting out brushfires for the most part, but, by 50BC, his work in Gaul was done and he began to focus his attention on those in Rome who had been friends but had become his enemies. They too, like the Gauls, would soon feel his wrath.

Caesar triumphed over the Gauls because he was a great commander in charge of a superior military machine backed by a culture and society geared towards war and expansion. Almost from its inception the Roman state had been militaristic in nature, but its success also came from learning from experience and adapting what we now call “best practices” to its own system. Thus, the Romans developed a system based on legions that proved flexible on the battlefield but was also easy to administer and supply logistically. Add to the legion system the Roman brilliance in engineering, especially roads, and their belief in discipline and a structured hierarchy, and you have a highly maneuverable and dependable fighting machine more than capable of taking on indisciplined tribal enemies who utilized an outdated warrior ethos in combat. In a pitched battle with even numbers and conditions, therefore, the Gauls stood almost no chance, particularly after their first charge that almost always foundered on the Roman shield wall.

The only area where the Romans were truly deficient was in cavalry, but here too they adopted a typically Roman solution: they hired or co-opted Gallic cavalry. That Caesar did so also highlights two non-military factors for Roman victory. Caesar and the Romans were masters at using diplomacy as a weapon often to divide and conquer. That would lead some tribes to ally politically to Caesar and willingly give him intelligence on enemy forces and actions. They then supplied him with auxiliary forces that would prove invaluable in Caesar’s conquest. To be caught in the maelstrom of Roman military and political power was to face almost certain defeat as most Mediterranean powers had found before the Romans got around to the subjugation of Gaul.

Two of Gripping Beast’s Roman legionaries, armed and equipped to fight in the forests and fields of Gaul.

Caesar’s campaigns in Gaul provide rich material for wargamers. The campaign as a whole would make an excellent strategic game, possibly for multiple players, or solo players against programmed responses. There were also seasonal campaigns against various enemies, not just the Gauls but also Britons and Germans. Turning to battles, Caesar fought full scale battles, deploying multiple legions against many thousands of tribesmen — how aesthetically pleasing would it look to fight those battles in 6mm? At the other end of the scale there were attacks on patrols or supply trains as the Gauls tried to disrupt the advancing Roman tide through guerilla warfare — time to roll out the 28mm figures. Finally, there were many battles and sieges in between where detachments
of Romans fought to survive in that hostile environment.

We are also fortunate in that we have Caesar’s first hand account of his campaigns that provides a rich source of material for wargaming campaigns and scenarios. Moreover, Julius Caesar and his actions remain some of the most argued over issues in all of history and new material is produced on an almost annual basis, and archaeological discoveries relating to the campaigns are frequently made and promulgated. Wargamers have no shortage of material, therefore, to delve into for understanding and simulating the fascinating clash of cultures that was Caesar’s campaign in Gaul.