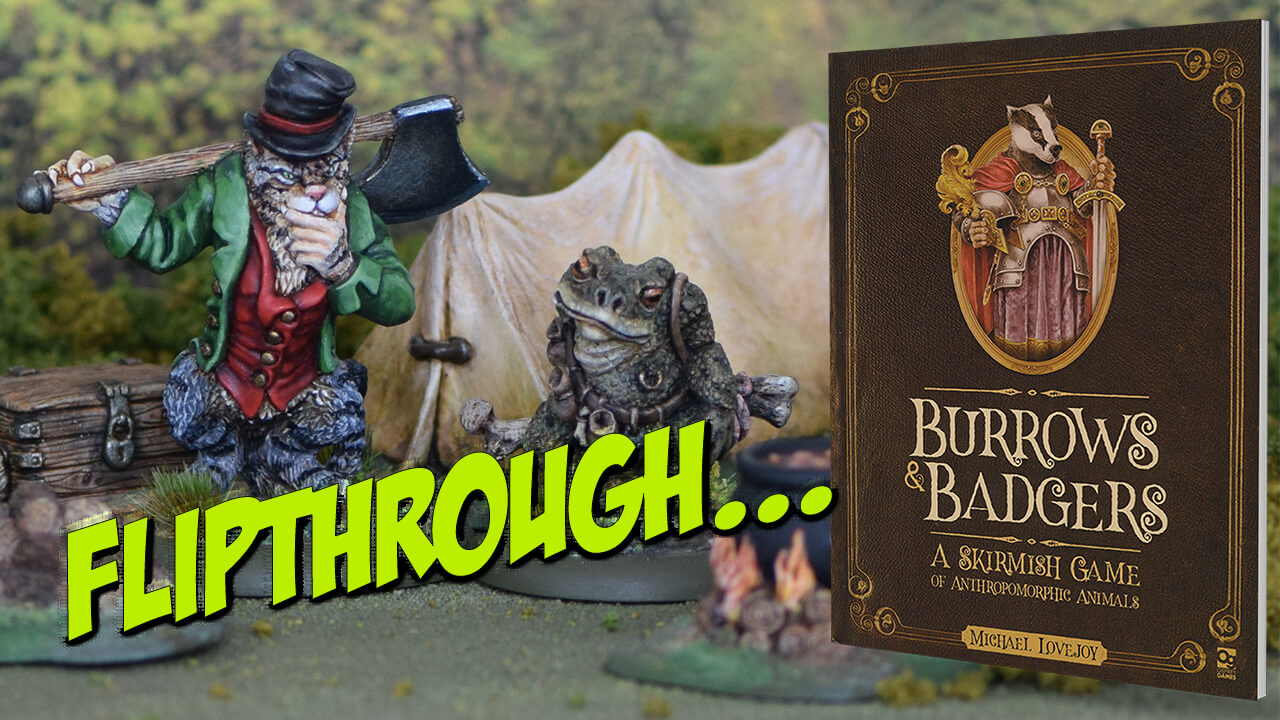 Created by miniatures sculptor Michael Lovejoy, Burrows and Badgers allows for gaming within a fantasy world of anthropomorphic animal miniatures. Set within the Kingdom of Northymbra, the rules cover skirmish level combat in small warbands.

Each miniature in the game is a character, so there are no rank and file warriors. The miniatures range in size from tiny shrews at 20mm or less to massive badgers at 45mm tall, allowing for a wide variety of character types. The rules may therefore be referred to as ‘RPG-lite’, a warband skirmish game with character progression. In keeping with the RPG style theme, the rules use the full range of polyhedral dice, rather than the usual d6. This helps to differentiate the races, allowing big differences between a small, stealthy mouse and a big, battle-hungry wildcat.

To avoid complexity, given that there are so many different races, weapons, equipment, spells and so forth, every rule in the game, be it combat, stealth or movement, is based around a single core mechanic. There is a statistic profile for each of the character types. These statistics are Movement, Strike, Block, Ranged, Nimbleness, Concealment, Awareness, Fortitude and Presence. Each statistic makes use of a particular dice type, such as a d6 or a d10. In addition, each statistic has an opposite stat, for example ‘Strike’ and ‘Block’. To hit an enemy, the character rolls their ‘Strike’ stat dice, against the enemy’s ‘Block’ stat dice. This means that every situation in the game is resolved by an opposed die roll; simple, and involving both players. A warband roster sheet is used to record the statistics.

At the simplest level, a player will declare an Action; say, to shoot a bow at an enemy model. They will take whatever dice is assigned to their ‘Ranged’ statistic, and roll it, adding or subtracting any modifiers. Their opponent will roll the dice assigned to their ‘Nimbleness’ statistic, plus or minus any modifiers. If the shooter’s ‘Ranged’ roll is higher than the target’s ‘Nimbleness’ roll, the shot has hit. Having each statistic paired with its opposite version means that there are more statistics than most games use. Combined with the need to track wounds, equipment, skills and all the other elements of a progressive campaign game on a player’s warband roster, this means it is important to keep the number of characters small; most warbands start with around five characters, with a maximum size of ten. This keeps the book-keeping manageable.

Given the nature of the desire to add individual character, there are options to customise the warbands. There are four different Allegiances a warband can take; these provide certain benefits to the warband, but also help distinguish them. A Royalist warband, for example, has benefits which make them better at fighting; whereas a Rogue’s warband has increased stealth and luck. All warbands can use any and all animal types. Once the player has decided their Allegiance, they pick a leader and a second; both characters can have extra skills chosen for them. Any character can be a magic-user too; the downside is each spell taken makes the character weaker and more vulnerable. Equipment choice adds further variables.

Magic plays a part in the realms of Northymbra, taking the form of Natural, Light, Dark, Wild, Unbound and Noble magic. Although there are many magic users, both learnt and natural magicians, it is an unpredictable and dangerous force. Each spell has a target number to roll against to use the spell.

Each character may be given a range of different skills, which all make use of one of the core statistics. There are six skill areas, Fighting, Shooting, Cunning, Strength, Movement and Innate.

The number of Wounds a character can take could be suggested by the size of the animals concerned. Small beasts like shrews or mice would have a small number of Wounds, and the bigger animals would have more. However, to keep the warband roster sheet generic, a special skill called ‘Tough’ is used. This skill reduces the amount of Wounds taken by its value each time damage is suffered, and means that even though all characters have sixteen Wounds, some are much harder to take down. So a Badger with Tough (2) will shrug off wounds that would badly hurt a mouse. The ‘Tough’ Skill is also used in the Armour rules, keeping everything simple and intuitive.

Each player has a store of Fate Points, and uses them to influence dice rolls. Adding a Fate Point allows the player to roll an extra dice. Players are forced to decide before the roll whether they are spending Fate, making it something you use at critical moments, when you really need that high roll.

With historical games, it’s important to focus on the theme of a particular period or conflict, to ensure the game ‘feels’ right. With Burrows & Badgers, there was no historical theme to work with; but the kind of stories the game is based upon provides something similar. In fiction, the underdog hero often manages to strike a crucial blow at the right time, taking out the all-but invulnerable bad guy. To simulate this, the rules use the ‘Perfect Roll’ rule; any time a player rolls the highest possible number on their dice, they get to add seven to their score. The beauty of this is that it favours the weaker characters; you are far more likely to roll a ‘perfect’ on a d4 than you are on a d12. Combined with the Fate Points and Heroic Sacrifice rules, a small, weak hero can often turn the tide of battle at a critical moment, or survive an attack that seemed devastating.

There are a complete set of Campaign rules, taking each player through the Pre-Battle and Post- Battle sequences. There are also adventures which take place between games, allowing opportunities to for Warbands to evolve. A large section of the rules design is focused upon the time between games; having warbands progress and alter is a big part of this type of game. Characters who go ‘Out of Action’ during a game may suffer permanent injuries, or even die. New characters may be hired, and equipment bought and sold. You might be offered a cheap magic item by a shifty merchant. New skills and statistic increases may have been earned too. There are also rules for dens; a place your warband can call home. Between games, your heroes can labour to add new sections to their den, giving special in-game benefits. Or they can wander Northymbra instead, and maybe find something useful, or get into trouble. Of course, warbands having dens provides the option to write a ‘den raid’ scenario; imagine breaking in to smash up that shrine to Moritasgus your opponent has spent the last three games saving up for! There are eight scenarios in the book, and more will apparently be added to the website. To enhance the longevity of each of the scenarios, players will find a Secondary Objectives chart; eighteen additional elements that alter the way a scenario is played. For example, the players may have rolled the basic Open Battle, and might be expecting a straightforward fight to the death. But if one player has the ‘Deliver’ Secondary Objective, and the other has the ‘Scavenger Run’ Secondary Objective, then it becomes an entirely different type of battle. So while Burrows & Badgers is a wargame, focusing on destroying the enemy warband is often not the best way to win. This allows a role for heavily armoured fighters, stealthy rogues, fast-but-fragile scouts or any of the other character builds that you can make.

Burrows & Badgers provides a narrative, campaign based experience that most gamers should enjoy playing. The level of detail in the characters is sufficient to create an enjoyable experience but the actual rules are simple to use, with some record keeping that is far from onerous. As a fantasy adventure opportunity, this is a fairly unique ‘world’ which is fully realized whilst accessible. Given the tendency for fantasy skirmish games to reflect one another, the background and approach taken here makes a refreshing change for those looking for something rather different from the norm. And the miniatures range which supports it is excellent!