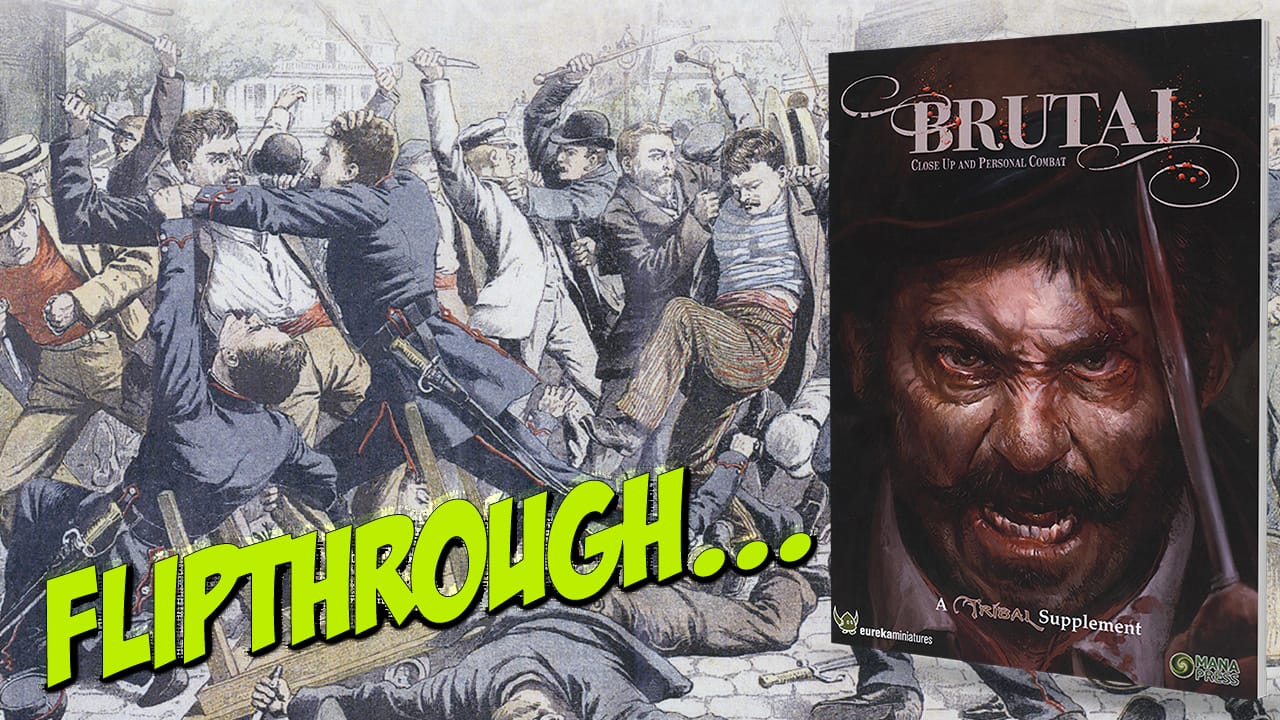 This is the third book to make use of the Tribal wargames rules. Having taken us through the conflicts between tribes from the Maori to Polynesia, then added Stone Age humanity in Primeval, this latest book, Brutal, takes the game into the world of gang warfare, from Ancient Rome to the Post Apocalyptic Wastes.

The Tribal system is a skirmish level wargame but operates in a unique way. First of all, Honour is everything, so every combat, every action, every death, is about gaining Honour for your tribe or gang, which is pretty much the only way to win the game. Secondly, the game does away with the traditional dice and tape measures – both players use a deck of standard playing cards for both movement and resolving actions. Each card has a suitable value, with Jokers and picture cards being worth more. Suits are also important.

The core game and the supplements include a number of scenarios that would be typical of those events that would characterize the life of a tribe or gang. There are rules for close and ranged combat, but also dirty tricks, which look good but cost you honour. A number of historical settings and cultures are outlined in the core game, including Maori, Aztecs, Vikings and Roman Gladiators. Each has their own unique rules, skills, weaponry and motivations for seeking to gain Honour.

The Primeval book builds upon the core rules by adding a whole new setting, taking players back to early mankind and the first tribes. In addition to new skills, we get new tribes such as the Neanderthals, with their own unique skills, and the Cro-Magnons, complete with suitable scenarios for facing them off against each other.

The Brutal book actually begins with some new suggestions for optional rules for Tribal players, reflecting the experience of many games having been played since the initial release. Moving forward, the rules for Brutal begin, firstly focusing on the types of weapons available to all gangs, including the use of firearms and the consequences for your Honour, the main aim of the overall game still being to gain Honour in the same way one gathers victory points. Guns are useful in the game, but their usage loses you Honour points and may attract the attention of law enforcement.

The weapons detailed are fairly generic and allow for gaming throughout many periods of history, from the age of the flintlock down to the modern day. Although the rules are intended to only feature a few firearms, there are optional and suggested rules to allow for more muskets to be added, allowing Toughs, the basic level of gang members, to all be armed with them. There are also rules for solo play, using a basic AI system, known as a ‘Robot’ in the game.

Having outlined the additions to the core Tribal rules, the authors have included some sample settings for Brutal gang-orientated warfare. These include a detailed section all about street gangs in the Renaissance-era Italian City States, gang fights in 19th Century New York, the world of superheroes and masked vigilantes, urban battles in Roman times, the battle for survival amongst the denizens of the Post Apocalyptic world, and the wider world of gangs in Victorian and Edwardian times.

Each setting has just enough information to pique your interest, contains any special rules and also provides a reading and / or watching list to help plan out your gaming.

The last two pages of the supplement are the most unusual, but also instructive for overall life skills. These are period pieces in many ways, based upon the French Apache street gang’s fighting methods and the art of defending yourself with a cane or piece of wood – not terribly useful for playing the game but perhaps of some use in life!

The Brutal supplement offers a great deal in very few pages. Yes, you need the core Tribal rulebook to play, but all three books are fundamentally a ‘sandbox’ in which you can create your own scenarios and game universe. Clearly laid out with some great images and photographs of miniatures from the Eureka, Copplestone , North Star, Killer B Games and Foundry, this is another nicely done book from the excellent partnership of Eureka Miniatures and Mana Press.