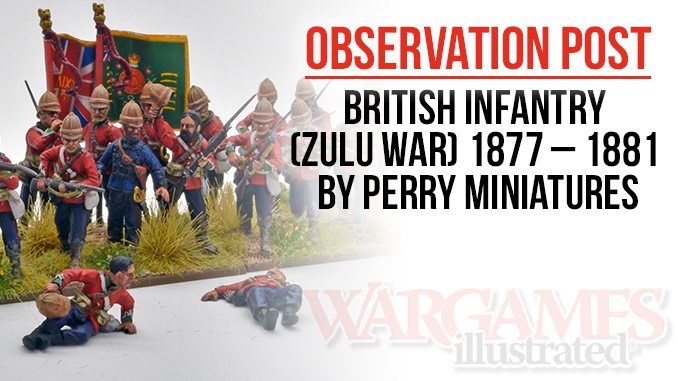 We had a chance to get our hands on some of the sprues from this upcoming boxed set of plastic miniatures, due for release at Salute 2017. These are some of the most widely recognized Colonial troops from the British Empire era and have been on many a gamer’s wishlist for a Perry Miniatures plastic release for quite a long time. Yet, once again, the Perry’s have provided additional options to allow you to field something a little different from the norm.

Six sprues of infantry are planned to be in the box, with the option to field troops in either firing line or standing ready poses. With five bodies in the set, this means you have options in posing and plenty of spares for other miniatures. Talking of options, a close examination of the spure shots provided will bear dividends. As you can see, you have head options that allow you to field troops in the ‘Colonial Service’ pith helmet but you may also have heads wearing the field service cap or bare headed, with or without bandages! The bareheaded version can be coupled with the arm and pith helmet option to create a classic scene from an Osprey book image. However, for me, the best head option are those in Home Service helmet, something that I haven’t seen before but have always wanted in multi-pose plastic.

Also included in the box are two command sprues, consisting of two officers and two casualty models. One officer body is in Patrol Jacket, whereas the other is in the standard jacket with riding boots. There are a host of options on this sprue, allowing you to customize your officers with everything from pistols to pencil and notepad! The casualty miniatures are nicely done, with one probably past hope and the other holding himself up. There are also bugler and standard bearer options on the sprue, plus the parts needed to put together a Heliograph, the main signalling method of the British Army at the time. And, again, those Home Service helmets!

This is a really useful set of miniatures that can cover a whole range of real and imagined conflicts. The range of options on every sprue is very well thought out and the chance to field a Heliograph team is a welcome addition. I for one am really looking forward to putting some of these figures together – although my chaps will probably not be joining the ranks of the large number of Imperial Infantry on Colonial Service I already own but will instead be protecting the Green and Pleasant Land from the dastardly invaders who desire the Empire’s fall.

Above: British troops on Home Service, Below: Zulu War British, the Full Set