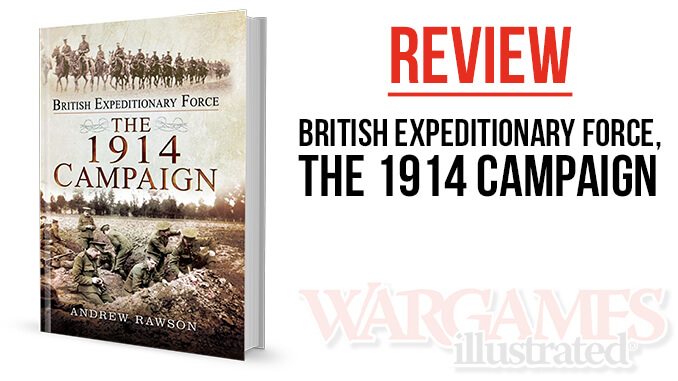 Author Andrew Rawson begins this work, entitled the “British Expeditionary Force, the 1914 Campaign” with the rhetorical question: “Another book on the 1914 campaign, surely not. Are there not enough out there already?” I must admit that was my first thought on skimming the pages and checking the photo’s as the latter are all well-known plates and in this book have much vaguer captions than in most others. Only one gives a unit and location for example, the rest have fairly generic captions.

Starting to read the book brought a change of mind however, as the author says he finds books with maps much easier to follow than those without and this is the route he has taken. I must agree that sometimes a picture is worth a thousand words and a map often more than that. I have often struggled to picture what is happening from a description even if I know the battle.

The text is a straightforward retelling of the trials and tribulations of the BEF in the 1914 Campaign setting out who did what, where and when. It doesn’t cover the build up in any real way but sticks strictly to the title both in timescale and who is covered. Rawson covers the deployment of the BEF, in conjunction with the French and Belgians giving a brief outline of the plans of all three. The French and Belgians make the odd appearance thereafter but the BEF are front and centre. As he goes through the 1914 Campaign Rawson covers each action with a description and a series of maps, either created for the book or with units overlaid on period maps showing who was where and when. The former are generally excellent though the latter sometimes are unclear in the size reproduced in the book.

This is the strength of the book, the visual aspect rather than any in-depth insight of the campaign. The book would seem to be for the general reader rather than historians (or wargamers) as it is light on details and analysis. The book does have a list of regiments and their abbreviated names which may be useful to the public but I suspect most wargamers would know who the Ox and Bucks or KOSB are.

The other area lacking clarity is in unit descriptions, for example the Royal Naval Division is sometimes described as the Royal Marine Division and there are other errors, not least in the index which completely ignores some units and the Royal Artillery in its entirety.

As a general primer for the campaign this is a useful book but it is nothing like as academic as Peter Hart’s recent work on the same period or as handy as some of the other recent books on the subject. While a useful book I think that wargamers would be better served elsewhere though for anyone refighting the campaign it is worth looking at as a comprehensive source of maps.