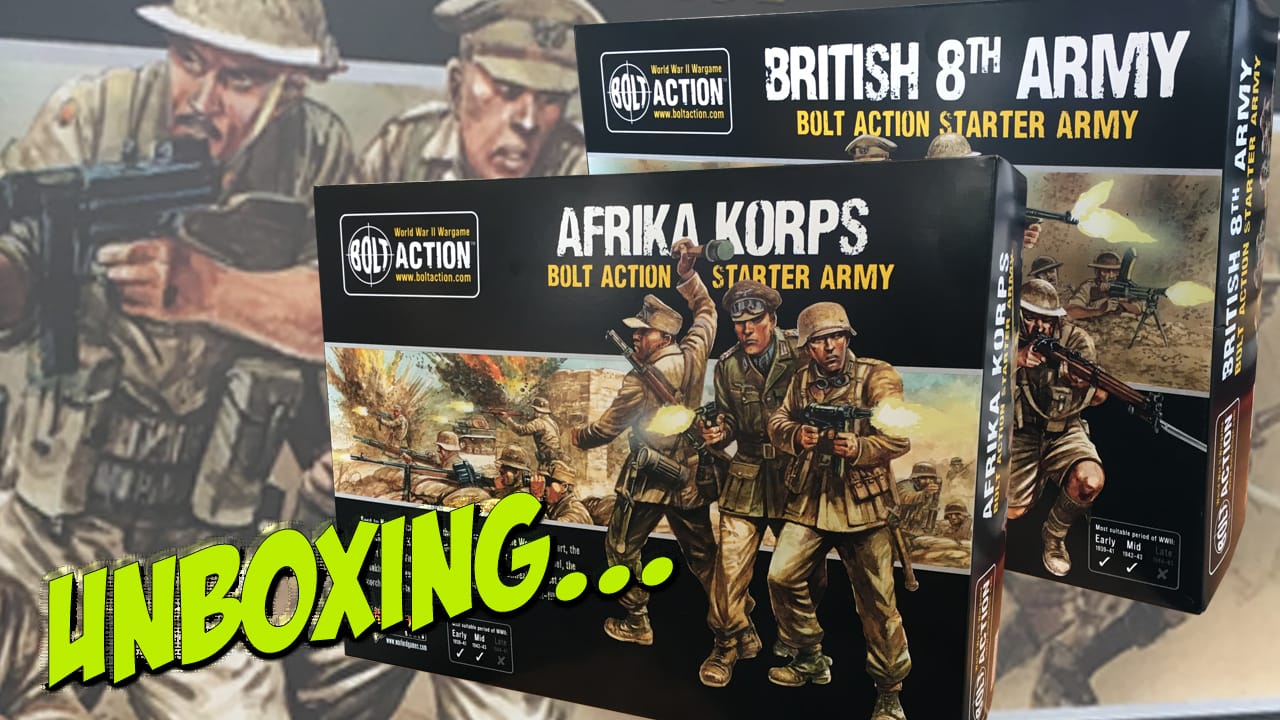 ­Designed to coincide with the release of the Campaign: Western Desert supplement, Warlord Games have added yet more miniatures to their Bolt Action range. The main release is two new starter armies, packed with plastic and metal figures from which to create your own forces.

The British 8th Army starter set contains enough frames to create 36 of the new plastic 8th Army infantry. These are the multipose figures that are now an established part of what Warlord does best. The weapon options cover the Early to Mid War periods, with Bren guns, Boys Anti-Tank rifles and Thompson sub machine guns. There are also 2” mortars, packs, pouches and sandbags which can be used. Perhaps the most unique part of the set are the different heads available, with the option to create units from the Scottish, Commonwealth or Indian Armies, with the latter allowing for the use of Punjabi or Sikh units.

The infantry support weapons needed to accompany them are in metal, with a 6-pdr anti-tank gun, a 25-pdr light artillery piece, a Vickers medium machine gun and a 3” medium mortar. All of these weapons come with suitable crews. Battlefield transport is provided by 2 Universal Carriers, in this case configured as Bren Gun Carriers, which come with plastic crew members and metal passengers in shorts.

The Afrika Korps starter set also contains enough frames to create 36 infantry, all plastic and with the German equivalent of the weapon and equipment options found in the 8th Army set. The head options include Feldmutze caps and helmets, often with sand goggles or scarves across their faces. A nice addition is the inclusion of figures in German style sun helmets, something not seen on the majority of metal ranges. Kar98k carbines and MP40 sub machine guns predominate, with the MG34, PzB 39 anti tank rifle and the 5cm light mortar.

However, unlike the 8th Army set, the Afrika Korps starter contains a much heavier ‘punch’ in the support stakes. In addition to the metal medium machine gun and the 81mm medium mortar team, there is the feared 8.8cm Flak 37 dual role artillery piece, with a seven-man metal crew, and a Panzer III medium tank, both plastic kits.

Both boxed sets come with assembly and painting instructions, cards with the relevant game stats for the contents, decal sheets, vehicle damage markers and enough plastic bases to accommodate all the figures.

These are well thought out starter armies, although the lack of an AFV in the 8th Army set could be said to be a disadvantage. However, you get a great value deal as always, saving money that can be spent on your own choice of additional support in the future. Plus, the new plastic multipose infantry are another step forward for Warlord, providing not only some excellent figures but the only option for those looking to create unique poses for their desert war armies.