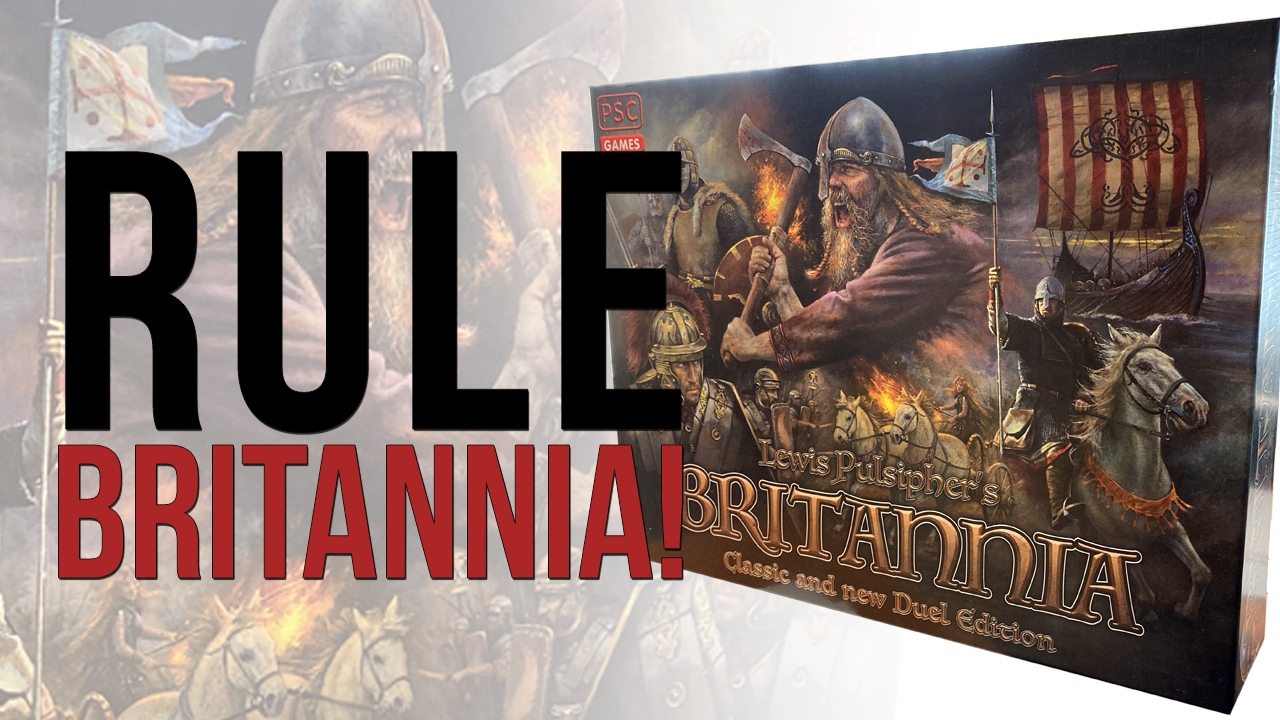 It’s not often we unbox boardgames here on Wargames Illustrated TV, but we are going to take a look at Britannia by Plastic Soldier Company for two reasons: 1). it’s by  PSC who are in the main and Wargames company. 2). It’s really, really good, oh and it’s about war.

Below is a transcript of the above video, for those who prefer to read than watch

This version of Britannia is the third incarnation of the game, and as we get more into it we’ll talk a bit about what’s new.

Let’s start by lifting the lid and seeing what’s inside.

First off we have a sheet of punchboard tokens, I won’t confuse you by saying anything more about those at this stage.

Next up, the 58-page rulebook. Yes, it’s quite a beast! Britannia isn’t a game for the faint-hearted .

As we flick through I’ll use this opportunity to tell you what the game is all about.

So, four players are required for the classic game (more on Duel Britannia later), with each player controlling several different nations which come and go during the course of a game. When a nation is active its controlling player scores victory points for achieving certain objectives, these are mainly in the form of taking and holding land, but can also include destroying opposing armies, becoming king or building forts.

Each of the 16 turns of the game represents a number of years, in certain years or turns invasions will bring different nations into play. For example in turn six 430 – 485AD there is a Major Invasion of Saxons led by Aelle who begins in the Frisian Sea and (hopefully) sweeps across the land destroying enemies, taking land, securing a base for future expansion and scoring points for the player who controls the Saxon, who, had also previously controlled the Celtic Brigantes, Irish, and will later control the Norsemen.

The genius of Britannia is that the game keeps everyone involved by mirroring the rise and fall of the nations of early medieval Britain, and whilst some nations like the Romans or Normans score you big points, smaller nations e.g. the Caledonians or Jutes can only ever provide a player with a small number of points.

It’s a ridiculously ambitious subject for any boardgame to tackle and you have to applaud  the designer for trying let alone succeeding.

Don’t expect to pick up all the rules on your first or even second game. But you can do a mini fist pump in your third game when, for example, you remember that the Norwegians gain “one additional reinforcing army in the North Sea for each area they occupy”…

As well as the rules for Classic Britannia – which remain pretty much unchanged from the second edition – there are also 14 pages of rules for Duel Britannia.

Duel Britannia is a new way of playing Britannia, which is designed specifically for two players and takes significantly less time to play that the classic version of the game – with a playing time of around two rather than five hours.

The rules are very similar, but significantly, the period covered in the game is 350 to 1050AD, so there are no Roman or Norman invasions, and only 13 turns.

The rulebook also concludes with a relevant ‘Historical Notes’ section – you can read up on exactly why the Welsh get so many points for taking York in turn 8 or 9!

As well as the Rulebook we have several play sheets which contain information concerning scoring, the order of play and the Timeline. You will need these close at hand at all times as they are your guide to what you score points for and when, and which nation’s turn it is.

The game board is a splendid piece of kit – both durable and fantastically illustrated – showing on one side the expanse of Britain from Cornwell to Orkney and on the other the Duel Britannia  board, including Ireland. I had feared that the inclusion of miniatures, as opposed to tokens, in this version of the game would mean that the board was too crowded, but my first game on this expansive board allayed those fears.

As well as all the dice you need to play, the game also includes 210 plastic miniatures, representing the infantry, cavalry and leaders of the different nations, resplendent in purple red, black and blue. This is a new innovation for Britannia 3rd Edition, previous versions have only featured tokens.

Designed by wargames figure sculptor Bob Naismith these are great little models with plenty of character whilst remaining nice tough playing pieces. We can forgive the manufacturers for making, for example, the Irish and Scots the same figure just in different coloured plastic if we consider the cost involved in the production.

Hurray for the return of Britannia I say! It’s a great game that is that fine epic mix of fun and endurance test.

No matter what the manufacturers say you’re doing well if you can get a game of Classic finished in less than five hours, but it’s worth it. You really do feel the history of Britain opening up as you play the game, or at least the bits where people are hitting each other with swords and spears. And every game tells a different story leaving you thinking “if only I would have just done this, rather than that” which is the measure of a good game in my book.

Well done to PSC for breathing new life into this much loved game.