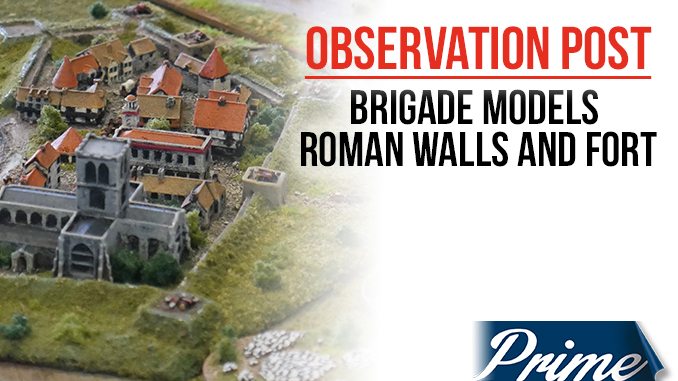 Brigade Models UK have an eclectic range of different products from 6mm Sci-Fi to 28mm World War One figures and small scale scenery and buildings.

Two packs recently released from their Small Scale Scenery range – which is 1/1000th scale, but (as they quote) “compatible with 2mm figures or 1/1200th scale ships” – provide walls and forts for tiny scale Roman modellers.

SSS-8074 is a depiction of Hadrian’s Wall in 2mm, complete with a milecastle and two watchtowers.

In all, there is 750mm of wall which is cleanly cast in metal and the milecastle in particular is very well-sculpted.

SSS-8075 represents a Roman fort that is typical of those found along Hadrian’s Wall and across the Empire. There are twenty pieces in total, with each piece being 40mm long. Two T-shaped pieces allow the fort to be connected to Hadrian’s Wall and the whole set comes with four double gates, eight tower sections, four corners and two plain walls.

Again, this is a well-sculpted piece, creating a very pristine version of the subject matter.

It’s difficult to imagine how good this 1/1000th scale kit can look, unless you see it in context and well presented. So here are a few photos of Mark Backhouse’s excellent 2mm, Siege of Portsmouth 1642 game, from Colour 2016, which used Brigade Games buildings in an English Civil War setting.