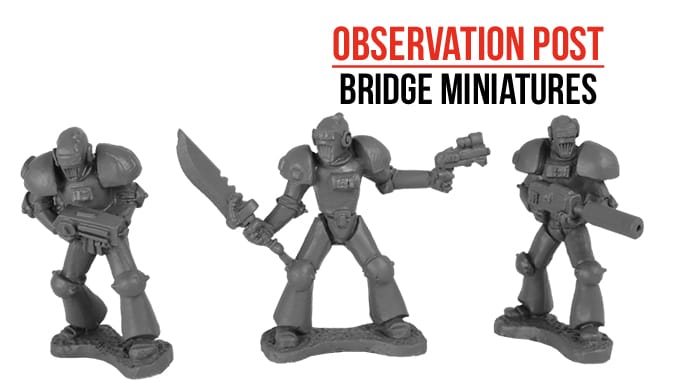 Early in 2018, Bridge Miniatures took the opportunity to acquire several 25/28mm ranges from Black Hat Miniatures. Based on the north bank of the river Humber in the city of Hull, UK, this company has an eclectic product list which has something for everyone.

Currently, there are four historical ranges, Samurai, Gladiators, Robin Hood and Three Musketeers. Under the Shattered Isle label, there is a fine range of fantasy 28mm miniatures, many sculpted by the likes of Kev Adams and Mark Sims. This includes ranges like Highland Dwarfs, Halfling Militia, Orc Buccaneers and Goblins.

Also here is the entire Cobalt-1 science fiction range originally produced by Bob Naismith and the even more eclectic Mutants and Madmen range which covers various science fiction themes ranging from Zombies to Space Dwarfs to Undead Marines to Superheroes – plenty of scope for many a wargaming scenario.

As 2019 goes on, several ranges will be coming out, including more science fiction miniatures to add to the Mutants & Madmen, several small ranges to be added to the Shattered Isles fantasy range and for the Cobalt-1 range and the company will be working on a set of rules to complement the figures, plus increasing the number of alien race variants. Also planned will be a new collection of mid to late nineteenth century ranges being worked on in 20mm for release in 2019.

Bridge Miniatures may be marketing previously available miniatures, but that doesn’t mean they aren’t desirable to wargamers. Many can complete or add to their current collections, or take advantage of the opportunity to get hold of miniatures from top quality sculptors. The actual variety of miniatures is so large that its impossible to focus on them here, so a visit to the company’s website is recommended.