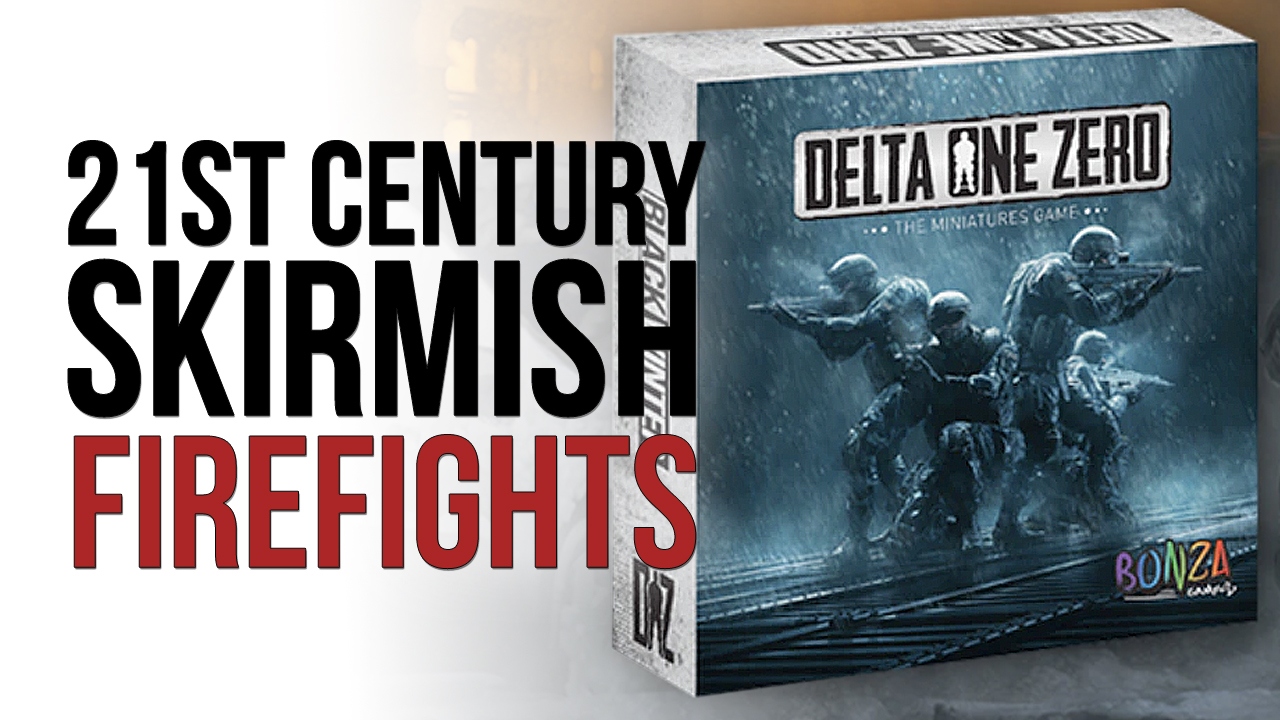 An interesting one here, as we unbox Delta One Zero. This is a fairly hefty starter set for a new modern combat game from Australian based company Bonza Games … telling you the country of origin was probably redundant there!

First thing to notice with Delta One Zero is that the box itself is nicely designed, and of a good, firm, chunky quality, which puts us in a positive state of mind for what might be inside. Once the lid is off there’s quite a bit within the box, and again it is well presented and packaged. We said it was an ‘interesting one’ at the start of the video and that’s somewhat down to the contents. This isn’t, perhaps, what you might expect from a boxed starter set as it’s not full of lots of hard-plastic frames or loads of softer injection plastic minis.

No, what’s here are 12 metal multi-part miniatures, a Learn to Play booklet, and all kinds of other gameplay aids, but no actual main rulebook. Curiouser and curiouser! It’s worth mentioning that the full ruleset is available for free in the downloads section of the Bonza Games website, version 1.3 at the time of this video.

The A5 Learn to Play guide included here will get you started though. It contains information around recruiting your force, the basic rules, and five missions, starting with an intro story – The Slav Defence. The Recruitment section covers the elements pertinent to your fireteams, who must stay together in formation. Each model has an imagined volumetric space, so no matter the miniature’s pose, even if it is crouching – a model high cylinder for line-of-sight considerations. A Volumetric Template, to determine the space a figure inhabits, is included in the box.

We’ll look away from the guide for a moment to talk about profiles which come on reference cards for each member of your formation. There is a wealth of information here – movement, initiative, Shooting, close combat, wounds, weapons, and shooting modifiers for distance. Keywords that can have a game impact are listed too and everything is clear.

Orders are assigned on a per-Fireteam basis, determining the way they’ll act in the turn, and they consist of a Move step and an Action step (though some Moves can be 0”). This means that you’ll need to pre-determine some elements of your models’ actions with incomplete information.

A token sheet, produced in a high-quality, thick card, contains a number of counters you’ll need during activation and gameplay, plus four Order Generators to assign to your fireteams. A number of the counters are marked differently on each side, giving you more options in their use and should you need more tokens – perhaps more than the one Reload token provided – these are also available to download.

There are two Order Generators for each player (working well with the two fireteams per-player provided). The selector clips that are provided are a tight fit over the Generator so be careful attaching them – they could damage the cardboard. These Order Generators are used to give fire teams their orders and combine with the sliders that are also provided. They also get used when rolling for scatter; each edge is marked with a number from 2-9, which sounds odd until you find out a 1 always misses and a 10 is a direct hit. This is nice stuff, keeping your tabletop less cluttered by giving a single element multiple use.

Back to the book and there’s a guide to the guide – always fun! But it is useful – it gives an idea of how the missions ahead work as well as showing different design elements that are used to highlight key points. They all get a nice visual flair applied and the whole book and game look great with high production value.

On page 6 the Quick Start Rules begin, running through the initial setup, then getting into the game – six turns of three phases. Orders and Initiative describe how you choose between the Engage, Steady, and Advance orders then issue them, face down, to each Fireteam. In activation you select a fireteam, reveal the order, then perform it – Movement first, then Actions.

The Engage order moves the fireteam, then allows them to perform an action. Steady allows them to move, then remove a Stress token from each model; should they be out of line of sight they can remove a second. The Advance order lets you move double, but no actions can be taken.

A Guts Check can be taken, to reactivate that same Fireteam and repeat the order. This will stress each model and may not be successful – a roll is made against the Command model’s nerve value – but the reward of a double activation may far outweigh the risk.

Rolls are made on a D10 and there are five included.

Once done with an activation fully, play switches to the opposing player. This is the core of the game. But then it’s onto specifics.

The Quick Start rules move to movement, then Actions – a condensed section compared to the more varied options in the main rules. This would be a bad thing if those main rules weren’t free online but, in this context, it makes for an easy to get into starter game that you can easily expand on once you have the basics down. Just one action here – ‘Attack – Ranged’.

If you’re shooting an exposed target, fully out of cover, your roll will get a +1, stress will give you a -1, weapon rate of fire determines the number of dice rolled, and the wound deck gets a card drawn whenever you make a hit. These will apply a wound and Stress, just Stress, or be a Near Miss (doing nothing). Take more wounds than you have available and that model’s out of action, causing stress on all other models in the Fireteam. This makes for a game of several select tipping points – a decisive action against just a couple of models in a Fireteam can have a crippling impact.

The Wound cards included form a common deck in the game so you will be hoping for the misses while your opponent suffers the wounds. Experienced gamers may even find themselves card-counting, working out when the deck is heavily weighted with damage potential, and choosing that moment to make an attack that could tip the battle.

Through those basic rules it’s into the Training Missions. Each has simple layout and Victory Conditions – victory points are awarded for all sorts including the number of times orders have been used. This reflects the simplified nature of these rules.

The tabletop is given some variety with containers and three red and three orange container sheets are included. These need to be cut out and then glued together and it is suggested you can make them sturdier; we recommend doing that unless you don’t plan on using them much after learning the game. They feel a bit out of scale to the figures, who are almost as tall as the containers, but they are a nice addition and really useful if you don’t quite have the terrain for a post-modern skirmish game in your collection yet.

More than just a mission to play, these games act as a walkthrough of how to play the game. The Forward mission is the most basic, then Regroup and Recover brings in extra elements, such as reactivation, and examines Fireteam coherency. Surprise Attack adds in new gameplay quirks – Snap Fire and Overwatch – as well as Rallying. Mission Four – Smart Stratagems – adds in the Tactical Cards, which let you perform high-impact actions such as clearing all Stress tokens from a model, alter a Wound Card, or cancelling an opponent’s use of a Tactical Card.

There are two decks of Tactical Cards provided – 18 for each player, a nice size, clear, easy to read, and, again, well-produced.

Finally, Incoming! brings it all together. It’s a gradual and successful build through playing that will quickly have you using all the main rules like a veteran.

The guide ends with an Appendix and you’ll probably be ready to dive into the main rulebook online.

So, onto the minis and very nice they are too. Each comes in its own box, well protected by some foam, and packed in individual baggies. Enough models are included here for two fireteams per player, along with the slotta bases you need to keep ‘em upright.

The NATO UKPF formation consists of six figures – three riflemen, medic, corporal, and a sergeant. The casts and sculpts are really nice and are 32mm “truescale” as advertised, no chunky heroics here!

But, other than the medic, the poses are a little static. Given there is a volumetric template it would have been preferrable to have some more dynamism in the sculpts.

Opposing the UKPF are the Russian MRB with three strelok, a Pulemetechik, Kommisar, and a serzhant. These match up nicely against the UKPF and have a little more dynamism in their poses.

One thing to watch out for is that all the arms are separate, so pinning and good glue/surface contacts will be key, dictated by the truescale. Not the most forgiving models for a starter set… but this is a somewhat unusual starter set. Using a little green stuff or Milliput will help you attach the parts more securely and hide any joins.

Once built the models look great.

So, this is a rather nice set to get started. There are some parts to the game that will be familiar to players of Infinity and the FFG Star Wars games and it’s an interesting addition to the post-modern scene. A little more dynamism in the sculpts would be appreciated but we’re being more picky than we might usually, because the quality of sculpting itself, and crisp finish, makes us hungry for more.

In addition to the starter set we some extras, so a whistle-stop-tour of those.

The 60 card Upgrade Deck is a cool way to add variation to your games and the small cards come in three colours. Red cards are weapons – pistols, shotguns, machine guns – and their stats and any special rules are noted. Some have the upgradeable keyword which are where the grey cards come in. Underbarrel Grenade Launcher is a particular favourite upgrade. The green cards cover other equipment like body armour, smoke grenades and med kits.

The Russian equivalent of the SAS are the Spetsnaz with their funky hooped jerseys, though you can’t really see them in these figures. Again, the casting is good and so is the sculpting. And one of them is a one-piece casting which saves on some build time.