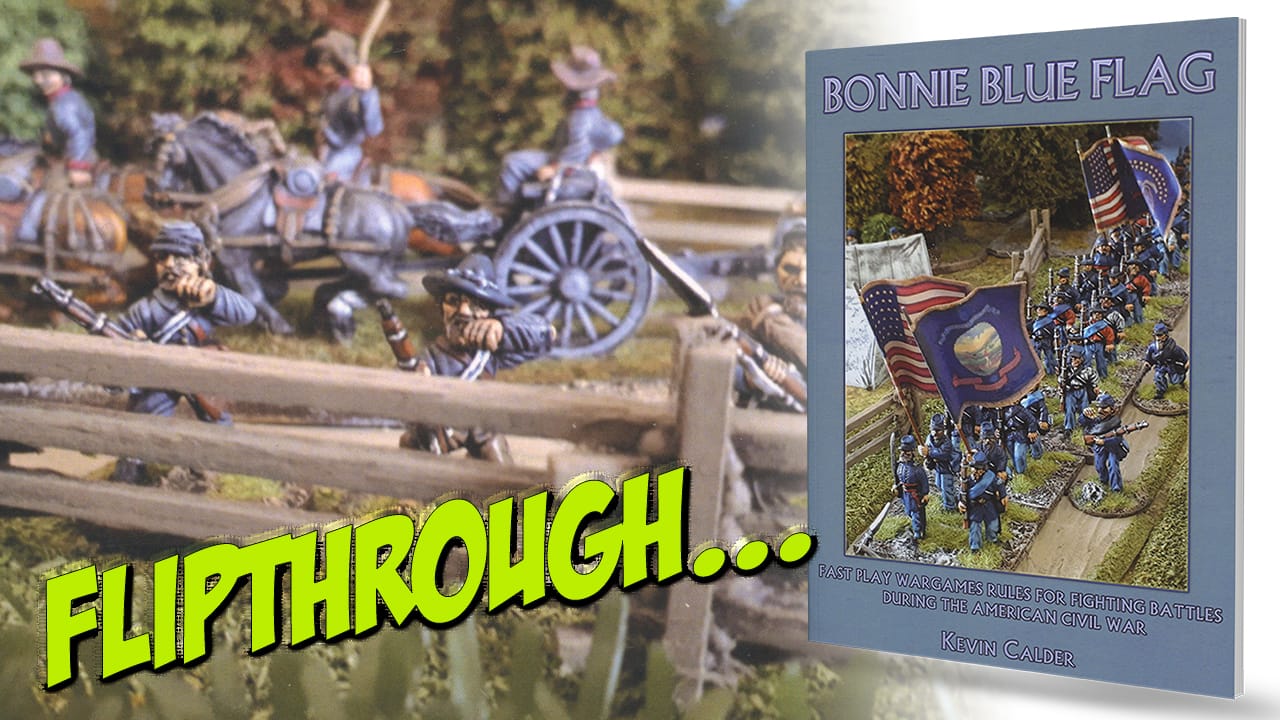 The Bonnie Blue Flag rules are a pocket-sized softback book consisting of just 48 pages. Designed to cover American Civil War battles with between 6 to 40mm miniatures, they are intended to play relatively quick games, with units defined by the number of bases and not the number of figures mounted on them – players are free to compose each of their bases as they see fit.

After a ‘Introduction’ and ‘What is required’ section, the basic premise of the game is explained. The main factor being the use of Attrition, which is allocated to every unit and each Commander. Attrition is recorded using a small D6 alongside each unit, with the colour of this dice used as an indication of the unit’s class.

The rules avoid actual removal of casualties in terms of figures and instead use the reduction of the attrition score to track the fighting ability of the bases in a command.

In the ‘A Basic Force’ section we are provided with a sample army and provided with rules on Formations, Skirmishers and Commanders, with the latter able to use their own Attrition to influence and add modifiers to a friendly unit in melee.

The turn sequence consists of 10 steps, many of which are conditional on decisions made. Movement rates are shown, with a basic movement per unit type which is added to by a D6 dice roll and modified upwards and downwards by other factors.

Firing is conducted using two D10, rolled as Percentage Dice. The sequence of firing is given, then explained in more detail with; weapon ranges, the Underfire Chart used for cross-referencing, and firing modifiers. Basically, the firer and target conduct an opposed percentile die roll with a target percentile for each. If failed, a number of D6 are rolled based upon the unit’s quality and the result referenced on a chart.

Melee is worked out using the same sequence as firing, meaning that having learned one set of rules, you can undertake two separate types of combat. This is a quick process, with easy to reference results, making for a rapid turn.

Once the basic rules have been explained, there are additional ‘expansion’, or more advanced rules, to add more detailed elements to your games. These cover typical situations from the ACW, including terrain, specialist units and complexed maneuvers.

We are also shown simple examples of firing and melee to aid understanding of the rules, followed by two scenarios to get you started with Bonnie Blue Flag. One, a generic ‘Hold The Crossroads’ and the other based upon the actual battle at Port Republic. Each scenario has a written explanation and suitable maps, plus, for Port Republic, a ready made Order of Battle.

The last few pages consist of a Quick Reference Sheet which, given the simplicity of the rules, should be all you need after a few games.

This is a simple,very well laid out set of rules, which flow remarkably easily and focuses on building upon rules rather than simply making them more complex. The book itself is full colour, with some useful ‘uniform guide’ artwork and photographs scattered throughout.

The option to use a variety of figure sizes and scales of battle is built into the rules, and the ‘figure count’ per base is flexible enough to keep costs low when building a force.

Having been recently re-released by Partizan Press following years of development, these rules are well worth a look for those starting out, or who are veteran ACW gamers looking for a fast playing, fun, easy to pick up ruleset which caters for all pockets.