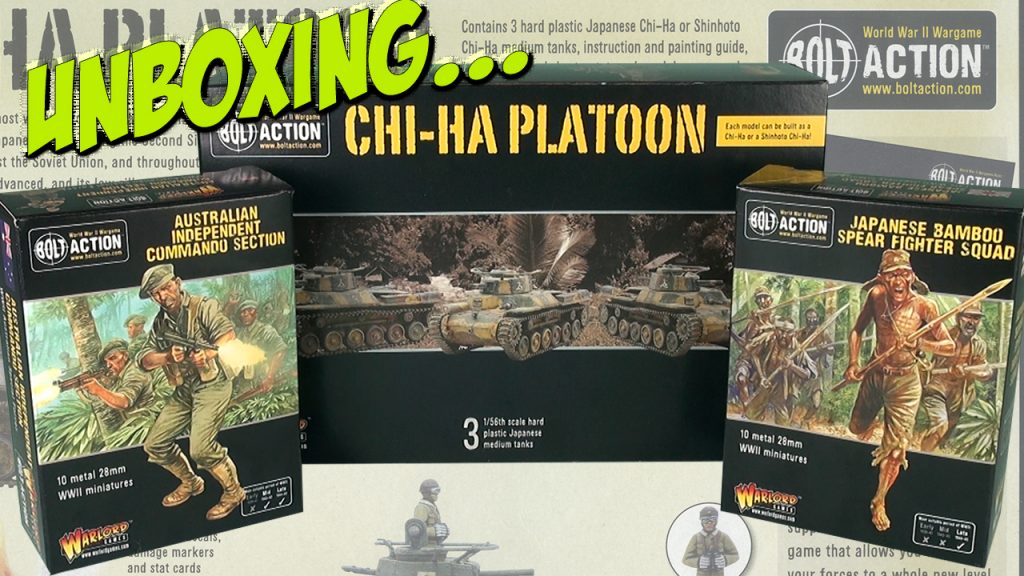 Warlord games continue to support their Bolt Action rules system for World War Two by adding new boxed sets and kits for a range of theatres. Some of the latest are the Australian Independent Commando, Japanese Bamboo Spear Fighters and the Japanese Chi-Ha tank platoon.

The Australian Independent Commando Section consists of ten metal miniatures representing just one small part of the twelve Commando companies formed during 1941 and 1942. Like all Commandos, these men were tasked with disrupting the enemy via sabotage, training guerilla forces and operating behind enemy lines. They served in many harsh environments, including New Guinea, Borneo and the Dutch East Indies.

The figures in the box consist of the one NCO with and SMG, a two man Bren gun team and seven men armed with either rifles or SMG’s. The SMGs are interesting as these are the Owen Machine Carbine, designed and built in Australia. This was a highly reliable weapon in the jungle conditions in the Pacific theatre and gained favour with not only Australian troops but also New Zealanders and Americans.

The miniatures themselves are well sculpted and are in some fairly active poses. They are one-piece castings, with the majority wearing the trademark beret of the Independent Commando units. Although these are Commonwealth troops, they wear not only the lightweight uniforms associated with the theatre but also have traded their British style anklet gaiters for the American style ones which cover most of the lower leg.

We’re moving from Allied Special Forces to the opposite end of the spectrum now, with Japanese troops reduced to fighting with whatever they can get hold of. As World War Two progressed, the levels of supply for beleaguered Japanese troops dropped dramatically, yet the commitment of the soldiers to carry on fighting remained high. To aid in this endeavor, some Japanese troops fought on in ragged or improvised uniforms, often armed with little more than sharpened bamboo spears.

The miniatures in this boxed set represent ten of these soldiers, charging into battle in ragged uniforms. There is a nice NCO figure brandishing a katana, whilst the remaining nine are shown in charging poses, screaming their defiance. As Bolt Action is a points based game, it is perhaps safe to assume that players can field an awful lot of these squads for the standard 500 points of most games.

From ragged Japanese infantry to the cutting edge of Japanese armoured support, our final box is the Chi-Ha Platoon. This consists of enough sprues to construct three Chi-Ha Medium Tanks, with the relevant turret and upper hull parts to create the standard Chi-Ha with a Type 97 57mm tank gun, the Shinhoto Chi-Ha with the Type 1 47mm tank gun and the option to add a horseshoe radio aerial to all of them. A full assembly guide is provided for both versions, plus painting and decal application examples.

This is the most widely used medium tank of the Imperial Japanese Army, fighting throughout the period of the invasion of China, the battle against the Soviets at Khalkhin Gol and during the whole of the Second World War. The tank is unusual in that it has no co-axial machine gun alongside the main turret weapon but instead has a rear-facing weapon in the turret.

Included in the box are stat cards for in-game usage and decal sheets to complete your model making experience, plus each tank can be modeled with the hatches open or closed, so comes with an optional tank commander figure. Damage markers are included for each of the tanks. A minor point is that this kit appears to be a wholly Warlord production: neither the box nor the sprues mentions the input of the Italeri company.

Each of these boxed sets is up to the high standard we’ve come to expect from Warlord Games. They are also of fairly unusual subjects, emphasizing the Warlord commitment to covering the whole of World War Two rather than just the well-known aspects.