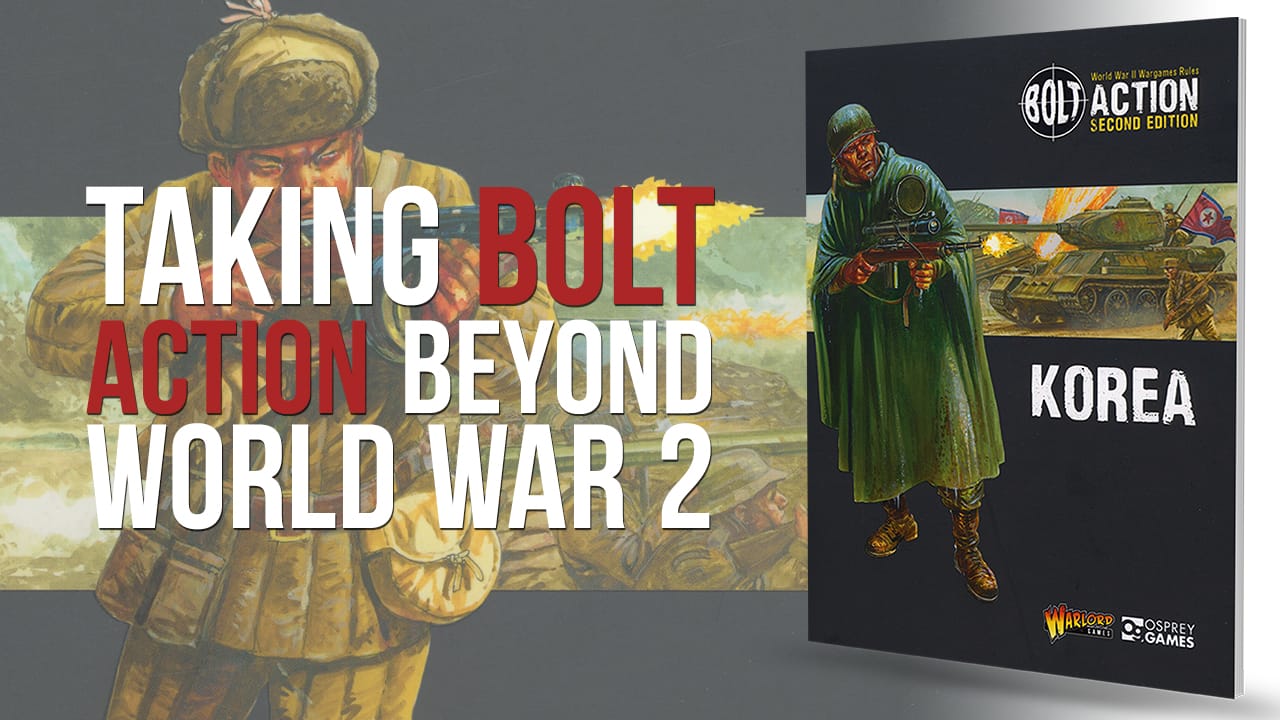 In the first ‘post-WW2 setting’ release for their highly successful Bolt Action rules system, Warlord Games have released Bolt Action: Korea. This new supplement is pretty much a whole new approach to the rules – although set only five years since the end of a worldwide conflict, the new book focusses upon how things have changed and what it is like when the world goes to war in a fractured nation. This softcover book contains 240 packed pages, covering the whole war from 1950 up until 1953, and charting the changes that took place.

The book begins with a brief but informative introduction which covers both the build-up to the war and the plight of Korea in the run up to 1950. As noted within this section, a key part of this supplement is the introduction of new specific rules to cover this period of combat, as well as new force organizations and weaponry of the post-WW2 period.

Each phase of the Korean War is covered over the course of a series of ‘history/scenario’ style pieces. These contain maps, images and setup, victory conditions and objectives which bring the events chronicled to tabletop life. It is this element that aids the gamer in their understanding of the war, an oft-forgotten war full of both typical and atypical actions, using old and new technology and tactics.

The book moves forward to explore the main participants in the war, beginning with the North Korean People’s Army. This army list is largely set out in typical Bolt Action style but presents some unique special rules for the post war men and equipment of this army. This army has a blend of the old and the new, with Chinese copies of Soviet weaponry, alongside the use of wave attacks and flags. This army has some elements which are similar to a Soviet WW2 force, but also has some aspects of its own, such as guerrilla fighters. The army list covers the whole of the war period, with the choice of troop types and abilities reflecting this.

The second Army List is also new, dealing with the South Korean Republic of Korea army. Again, although based upon the US and other Western forces, this is an army which begins the war having been trained largely for defensive work which then goes onto to develop into a suitable force who can take the fight to the enemy, albeit with United Nations military support.

The United States and United Nations forces list gives players Army Lists for the US Army, US Marines and British and Commonwealth troops. Again, there are elements of WW2 doctrine, but the major contribution is the fact that each of the army lists deals with troops from the Early, Middle and Late war periods, plus new weapons such as recoilless rifles, improved tanks, jet aircraft ground support and the use of helicopters for all but offensive operations.

The final Army List outlines another new force, the Chinese People’s Volunteer Army. Without the intervention of the Chinese, the Korean War would arguably have been over fairly quickly. However, the tide of ‘volunteers’ were able to stem the advance of U.N. and R.O.K. forces just when victory was in their grasp. The Chinese were an implacable foe, who used tanks and bugles, human wave attacks and firepower. The army list has the special rules and specialist units that characterise this experienced and hard fighting army.

Of course, as this is a Bolt Action book, there is a ‘period specific’ army selection section, which outlines the choices which can be made from 1950 up until 1953 and covers particular major events. The section also includes information relating to the different national forces which served with the U.N., from the Belgians to Colombia, Ethiopia, Greece, Turkey and more. In one sense, these could be considered ‘minor’ forces, but they served with distinction far from home. Lastly, the ‘major’ powers have their own period selectors, again covering the events and years of the war. The ‘Notable Combatants’ section appears to be the book’s equivalent of the Legends found in the WW2 versions. Rules and points costs are included here for a number of individuals that may be deployed.

This is a useful book which may be seen as hopefully the first of many forays into the Post-WW2 period. A great deal of effort has been made to not only inform but commemorate those who fought in the Korean War. The level of information is of a high standard, and the new army lists and rules for this period really work both as information for this particular war and also could be used for some interesting encounters in a ‘What If?’ fashion. A straightforward but serviceable approach to a complex topic, which reads well and is very gamer friendly.