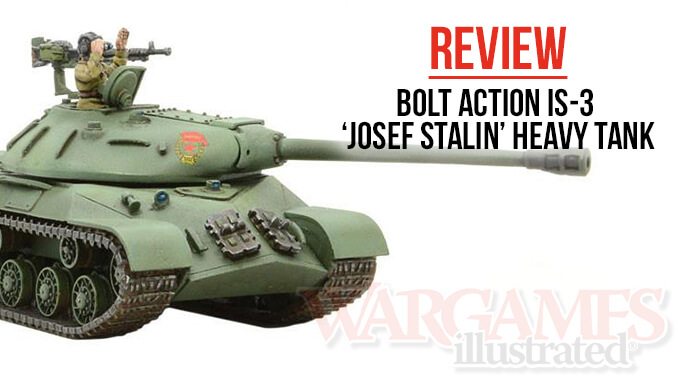 The IS-3″ Joseph Stalin” tank, which appeared just too late for operations on the Eastern Front, was the latest iteration of a successful family of heavy ‘breakthrough’ tanks deployed by the Soviets in World War 2. The IS-1 tank, itself a development of the KV series, was followed into service by the IS-2 which mounted a formidable 122mm main gun. The success of the IS-2 against the German Tigers and Panthers stimulated Soviet designers to continue development and the resulting ‘Object 703’, the prototype IS-3, appeared in October 1944. Although narrowly missing action in Europe, at least one regiment of IS-3s were deployed to the Far East in August 1945. Probably the most advanced tank type of its time sporting a revolutionary domed turret and sharply sloping frontal armour, over 2,000 examples of ‘The Pike’ were built and went on to equip the Red Army and many other Soviet clients through to the 1960s.

This 1/56 scale example from Warlord Games is a mixed media kit with four resin parts comprising the hull, turret and two track/road wheel assemblies. Twenty-two white metals parts provide the main gun, turret hatches, commander, anti-aircraft HMG and the ubiquitous auxiliary fuel tanks. The resin parts are very crisply moulded and the white metal components are up to the usual Warlord standards. This is no small kit, being 127mm long and 58mm wide, and produces an impressive miniature which will look good on any wargames table. As with all kits of this type a certain amount of clean-up is required with the inevitable ‘gate and vent’ protrusions needing to be removed from the resin parts using clippers or a craft knife and finally sanded down. There was very little flash to remove and the entire assembly easily went together using Super Glue.

Pros: From every angle this kit appears to perfectly capture the unique look of the IS-3 displaying the futuristic lines of a tank very much ahead of its time and whose influence can still be seen in most contemporary Russian main battle tanks. The excellent surface detailing will lend itself to a nice weathered paint job. Unlike some resin kits this example fitted together very well and an initial base coat should cover any visible joins. I particularly liked the tank commander figure which was supplied with three separate arm options.

Cons: All resin kits require preparation using modelling tools and sanding, which requires precautions, so some experience and additional care is required.

Scope: Although the IS-3 was absent from the European theatre of WW2 it did see service with Egypt in the 1967 Arab-Israeli war and a few captured examples were even used by Israel. However, where I really see this model shining is for those players of Bolt Action or similar systems who want to recreate the ‘What-If’ scenarios of a European WW2 extending into 1946 or a hypothetical conflict between the Western Allies and the Soviet Union breaking out soon after the German defeat.