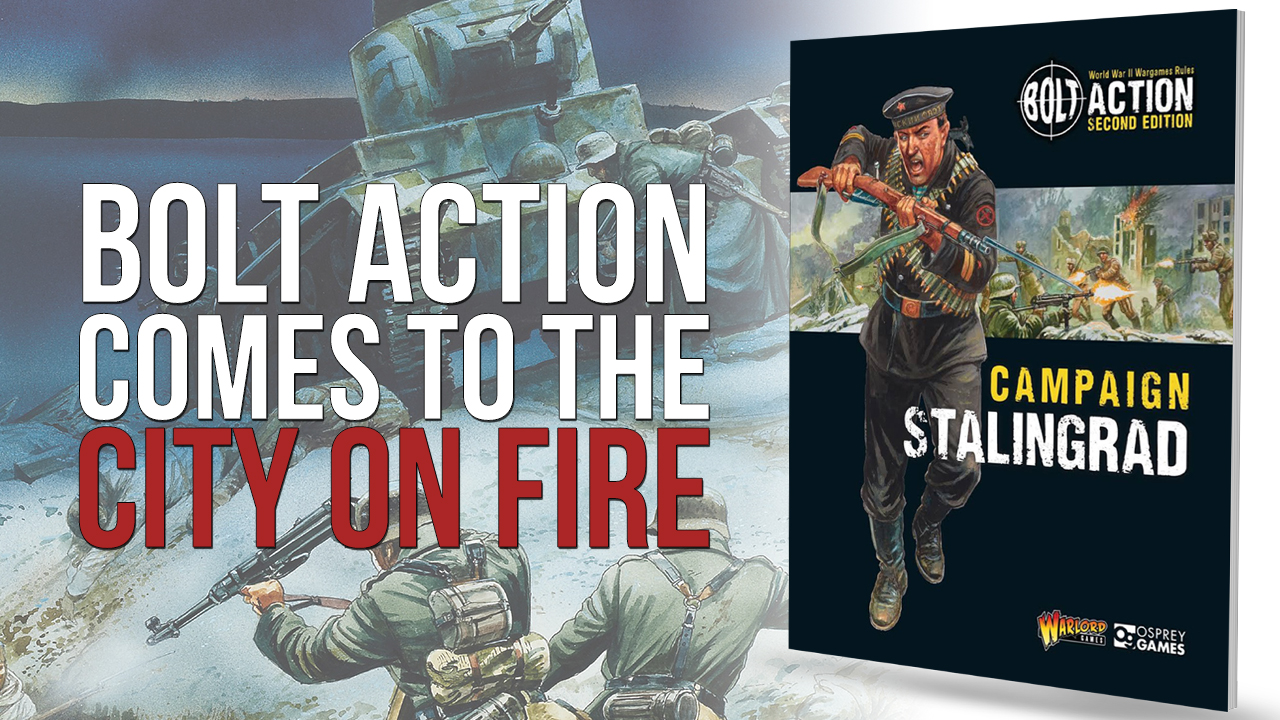 ‘Prelude’ sets the historical scene for the Stalingrad campaign, taking us from the situation in January 1942 to the Fight for the Don Bridgeheads in August of the same year.

After a short historical intro to the battles around the Don River we get into the first wargame scenario.

As we proceed through the book we will find another 21 scenarios taking us from the Don to the proposed German breakout from the city of Stalingrad. The action in the supplement follows the German Sixth Army and the Soviet 62nd with all the tabletop action centered around the forces within these armies.

As we flipthrough the scenarios you will note the tried and tested Bolt Action formula of ‘Objective’, ‘Set-Up’, ‘Special Rules’, ‘Forces’, ‘Deployment’, ‘Game Duration’ and ‘Victory’. Welcome distraction from the game mechanics is also provided by box outs with historical details about such things as “The Stug 33b” and “Women in the Red Army”, there are also stats for “Legends of Stalingrad” like Vasily Zaitzev and the Master Sniper: Major Erwin Konigs.

All the scenarios are engaging to read and I leave you itching to get the ‘toys on the table’ as soon as possible. Of course gaming from the Russian countryside to the mean streets of Stalingrad does present players with some interesting challenges when it comes to gathering both models and terrain, and any attempt to complete all 22 scenarios will be both satisfying and formidable.

The Scenarios conclude with Operation Ring – the Soviets final assault on what was left of the beleaguered German Sixth Army .

After a few pages wrapping up the history, we are introduced to the ‘New Soviet Units’.

This Includes two new Commissar options – one of which, the politruk, gives Soviet players a post-October 1942 Commissar option. The politruk no longer has authorization to shoot any deserters, but gains the power to inspire nearby Inexperienced squads to fight harder.

Furthermore, Soviet lists gain two new sniper options, a Student Officer squad, and a fresh-off-the-assembly-line Tractor Factory T-34. Perhaps most interesting of all the new units is the Storm Group. These fearsome Soviet squads are expensive but deadly – always striking first in close combat when they charge, even when the enemy is behind cover!

For the Germans, since Stalingrad was primarily a battle of infantry, new unit options have made their way into the book to allow players to field even more varieties of German landsers. Among the new unit options are early-war Panzergrenadier squads, Croatian infantry, Jager squads, and Alarm troops – units hastily thrown together in emergencies to halt enemy breakthroughs.

Croatian units are able to take advantage of the “Hitler’s Buzzsaw” rule for machine-guns, as well as the brand new “Croatian Pride” rule that allows them to remove two pin markers whenever passing a “Snap To” order!.

Jager units received extra training, that, in theory, allowed them to move quickly through hilly terrain. In Bolt Action this is represented by the ability of Jagers to advance at a run through rough terrain – a valuable skill in the rubble of Stalingrad.

‘New Units’ concludes with those for the Romanians. The stalwart Romanians appear in several scenarios in the Stalingrad supplement and are able to make use of Tankettes and Armoured Cars.

We then have one page of ‘New Options’ which includes messages, Demolition Charges and Rifle Grenade Adaptors.

New theatre selectors comes next. These are the army lists used in Campaign Stalingrad.

For the Soviets, the earliest selectors represent the Red Army as they fought on the outskirts of the city and during the initial assault. The options in this list are fairly consistent with other early-war Soviet options, with the exception of the first defenders of the city, whose impromptu defences utilized large numbers of militia units, tanks that had just rolled off the assembly line, and re-purposed anti-aircraft guns.

Later lists contain several options for close-range fighting and heavy artillery bombardments. In the last third of the book the Soviets gain access to their Operation Uranus lists which are mainly tank platoons, including a fearsome Flame Tank platoon.

German players, likewise, gain several new lists that begin as fairly typical examples of early-war infantry and Panzer platoons. An interesting new addition is the Armoured Kampfgruppe platoon. In Bolt Action terms, the Armoured Kampfgruppe is a hybrid infantry and tank platoon. It requires players to take an officer, a mandatory tank selection and a motorised/mechanised Panzergrenadier squad. While the mandatory selections are expensive points-wise, players have freedom to fill out the rest of their list with a mixture of vehicles, infantry, and support options.

Later in the conflict, the Germans relied increasingly on assault guns, such as StuGs, and heavily-armed Pionier squads. Several tank platoon selectors are also included, especially to represent the armoured forces sent to break the Soviet encirclement around the Sixth Army.

The 1st Romanian Armoured Division selector gives Romania its first tank platoon list, allowing a prospective player to field a force of motorised infantry alongside German and Czechoslovakian tanks. Meanwhile a Romanian Cavalry Troop selector allows an entirely mounted force of Romanians to go into battle supplemented by an array of armoured cars – including the diminutive R-1 tankette, which also makes its debut in this supplement.

We move from the Army Lists to ten pages of ‘New Rules’ including ongoing artillery bombardments, snow, digging in, fuel and ammo shortages and some detailed rules for city fighting with new rubble and FUBAR tables.

The book concludes with a new campaign system that allows players to add context to their Stalingrad games by competing for control of the city.

Campaign Stalingrad really is the only book you will ever need for wargaming in and around one of the most famous battlegrounds of World War Two. You would be hard pressed to think of anything the author has not included within the leaves of the book and its well written, engaging and entertaining to boot. If you’re one of those World War Two gamers whom I’ve never met who say “I love World War Two, but I’m not interested in Stalingrad!” then this book isn’t for you. For everyone else, it is.