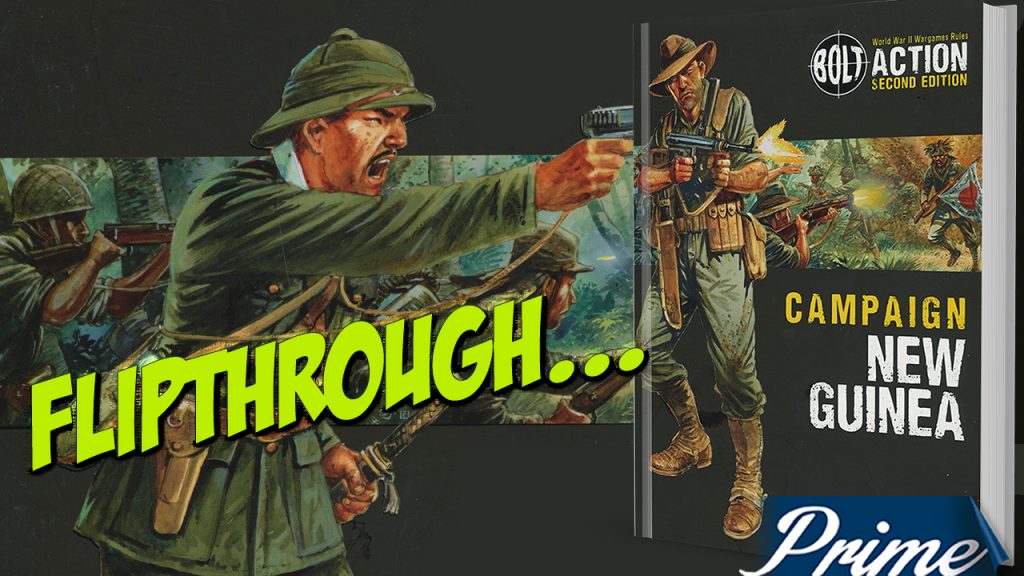 The latest supplement for Bolt Action covers the fighting for New Guinea during World War Two. This is very much a wargamer’s book which provides details on the main forces involved, some history and a number of scenarios which cover particular parts of the fighting.

The first part of this paperback book contains a brief overview of the situation in the Pacific and then plunges into the first and second scenario, complete with maps, special rules and forces involved. A nice touch is the use of a section entitled ‘Aftermath’, which offers some historical details on what, happened as a result of that particular battle or raid.

There are 12 scenarios in total, charting the progress of the campaign from its beginning to the end. Along the way, there are clear maps and information on key warriors and their use in the game, plus the weapons used, a number of photographs of Warlord miniatures ‘in action’ and some excellent Osprey images for the troops involved.

Full details of the armies involved, their special rules and new units for established forces are included, allowing you to field such forces as Papuan Infantry, unique vehicles, Japanese forces and the guerrilla units formed by members of the Netherlands armed forces.

The ‘Theatre Selector’ pages contain details of the early war Australian units, Australian Tank Troops, the arrival of US forces on the islands and the forces allowed in each theatre.

The Appendix outlines the Special Rules and other information required to re-create actions during the New Guinea campaign, including Japanese leadership, tropical hazards, bunkers and minefields.

This is very much a supplement for wargamer’s created by people who know their subject very well and have adapted their knowledge to fit the Bolt Action rules. There are also new ideas and rules for use with certain Pacific War armies, plus new units that can add more to your gaming choices. Overall, a useful book that reflects a partially forgotten campaign.