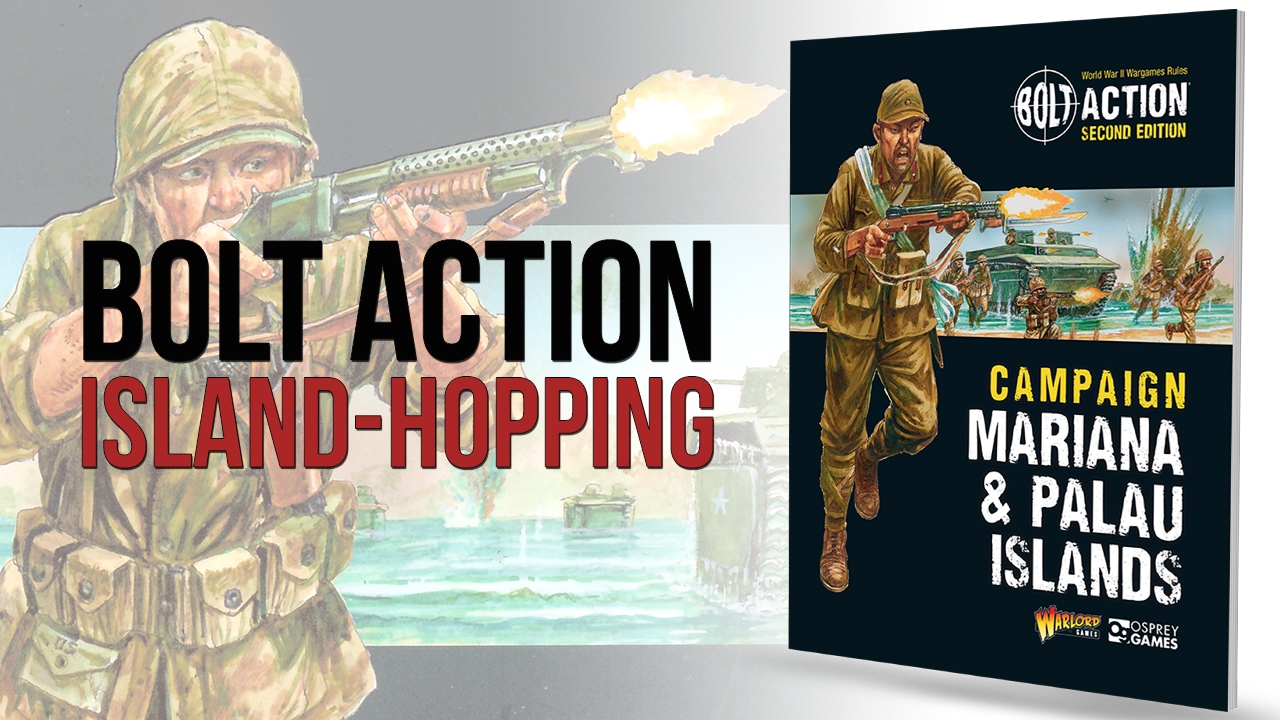 Bolt Action continues its haphazard journey through World War II with the latest supplement, documenting the island-hopping campaign of the United States in the Pacific. It takes players from June 1944 to October 1944, encompassing Operations Forager and Stalemate II.

The Mariana & Palau Islands book comprises of 162 pages over 14 chapters. Let’s get into it!

The first chapter sets up the building blocks for the rest of the book. In a change from other supplements four scenario ‘Types’ have been implemented and are used throughout: Beach Landing, Counter-Attack, Advance, and Strongpoint Assault. These are adjusted within the later scenarios to model the individual action.

Starting on page 16 there’s background on Operation Forager before the book focuses on the first part of it – the Battle for Saipan – the foreteller of many hard fights to come. It began just nine days after D-Day in Europe and ended on the 9 July 1944.

Flicking through the scenarios, which run from page 24 to 42, we can see how they are adaptations of the four ‘Scenario Types’ covered earlier in the book.

Saipan includes a rarity in the Pacific – a Japanese Tank attack on the 17 June. On page 34 one of the special characters makes an appearance – Lee Marvin – actor, singer and Marine.

On page 46 to 49, seven scenarios later, the chapter concludes with action specific selectors for the US Marines, US Army, and Japanese Army.

After Saipan comes Guam, between pages 50 and 70. Only two invasion points were feasible on this island, so the fighting concentrated at them. A tough landing and large counter-attack are followed by slow progress, all gameable via five scenarios, and including rules for hiding your Japanese tanks in straw buildings.

Taking place simultaneously was the Assault on Tinian, covered between pages 71 to 79. For the US, this was one of the most successful island attacks, over almost as quickly as it takes to read this one scenario chapter, ending with the Guam selectors for the US and Japanese combatants.

At page 80 the Operation Forager coverage ends with an appraisal of the history – concluding that it was a “resounding success” for the Americans.

The Palau Island campaign begins with a historical introduction on page 82 and includes the Rifleman’s Creed in a handy box. “This is my rifle, there are many like it but this one is mine”

The Battle of Peleliu began on the 15 September and two months of fighting was needed to clear the island, over terrain that was unexpectedly tough, due to American Intelligence failures.

Scenario 15 (page 93) is another tank battle, in which the Japanese force is counterattacking, which makes for an interesting game.

Scenario 20, Last Man Standing, on page 109 rounds out the six scenarios for this section. All interesting, but very tough for the Japanese player!

Angaur was the final part of the Palau puzzle. Invaded on 17 September, victory was prematurely called on 22 September, only for the fighting to continue for another month.

This short section of the book (pages 111 to 117) ends with the Selectors for the US Marines, US Army, and Japanese forces.

As always in Bolt Action supplements, there are new units to add to your forces, this time limited to the Japanese and United States. These run from page 120 to 127.

The book ends with a number of special rules. These cover a wide range of topics including:

In conclusion, this book offers 21 Scenarios in total, along with lots of history, new units, weapons and rules – a useful addition to your Bolt Action library for anyone already interested or who could be tempted into this fascinating theatre.