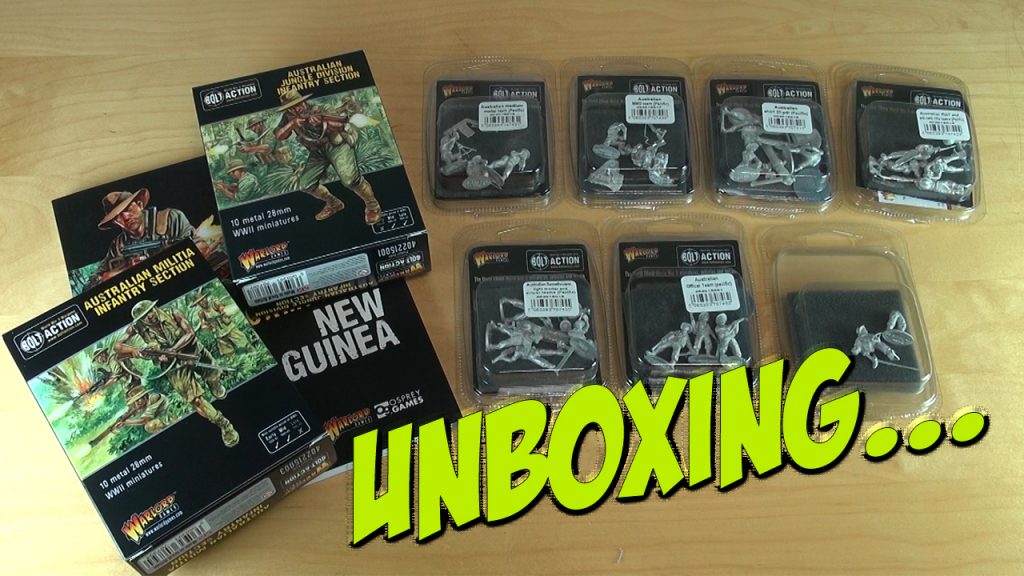 We’re taking a look at some of the new figure releases to support the new Campaign: New Guinea supplement for Bolt Action. This time, we’re focusing on the Australian forces.


Our first blister is a Medium Mortar Team. The miniatures are posed ready for firing, in a typical mix of uniforms.

The next is a Medium Machine Gun team, in this case a Vickers machine gun, with a three man crew and a tripod on a sculpted base.

Moving up in the support stakes, we have a Short 25 pounder, an innovative re-design by the Australian army to produce a light weapon able to be moved around more easily in difficult terrain.

In order to tackle Japanese tanks and vehicles, we have a PIAT and a Boyes Anti-Tank Rifle, with two crew for each weapon. The crews are posed as being prone and come with suitable lozenge bases.

The next pack is a bit of a mixed one, with a flamethrower, snipers and a light mortar, providing additional options for your force organization.

Of course, all that firepower needs some direction, so we have a pack of Officer Teams to add into the mix.

Our last blister pack is the ‘freebie’ figure for those who buy their Campaign book direct from Warlord Games, a small vignette piece which shows an Australian soldier carrying a wounded comrade.

All those support units are great but the core of your force will be Infantry Sections. Here we have one of the boxed sets, containing ten Australian Infantry suitably equipped for jungle combat. Owen SMG’s, a Bren gun and SMLE rifles and specialist jungle uniforms are the order of the day.

In contrast, the Austrailian Militia represents the brave men who fought the Japanese during the early part of the campaign, often with older equipment and wearing less hardwearing uniforms. Section support is a Lewis gun with more use of rifles than SMGs.

Other releases are planned for the Australian forces in the not too distant future, so we’ll bring you more when we have them in hand.