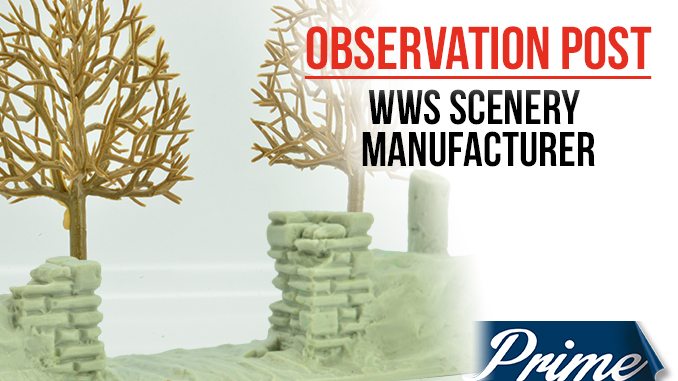 Some of the latest items from WWS Scenery Manufacturer include Bocage Battlefield Kit 4 and Stonewalls and Pillars.

The Bocage Battlefield Kit includes six resin sections of typical bocage earth mound bases and a gate. The base sections consist of two long straight sections, one with space for the gate, two short sections and two corners. The straight sections have ‘plug in’ holes to place three plastic trees, supplied with the set, into the base structure. The base pieces are interesting sculpts, complete with some animal details and tree stumps. Also included is a bag of scenic scatter and three bags of ‘clump’ material designed to be used on the trees or to form the bocage itself.

The Stonewalls and Pillars set consists of four lengths of dry stone wall and five pillars designed to be interspersed with the wall to form corners or supports. The walls are very rustic in appearance, although there is a certain amount of uniformity as each piece is cast from the same mould.

This type of terrain is useful for a number of tabletops, with the bocage being most suitable for Northern France. The fact that the Bocage kit comes with all the required elements allows you to customize the final result to a certain extent. Fairly generic terrain is always useful and it is good to know that some manufacturers include everything required in one package.