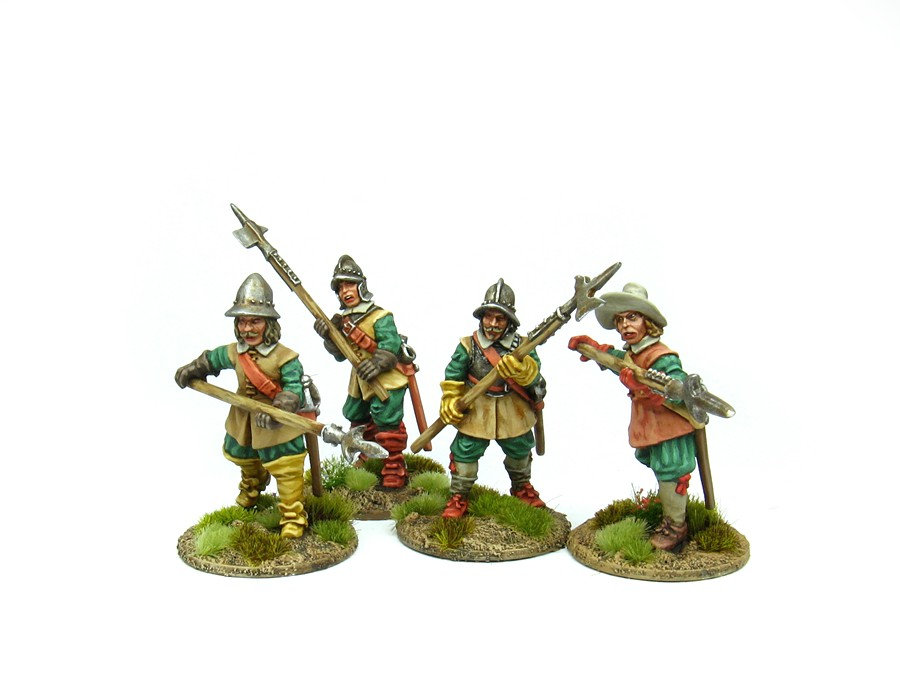 Bloody Miniatures are a new manufacturer providing 28mm metal figures suitable for conflicts in the early to mid-17th century, such as the English Civil War or the Thirty Years War. The figures are sculpted by Nick Collier and have been designed to match the ranges he designed for Bicorne and Renegade some years ago. These are on the larger size of 28mm and it is worth checking out the Bloody Miniatures website to see the handy size comparison picture they have included in their gallery.

What makes this range stand out in the 28mm ECW/TYW realm is that they’ve been designed to suit smaller scale skirmish type games. This means that rather than focusing on poses to fill the ordered ranks and files of a 17th-century pike and shot formation, the figures are all heavily armed and in dynamic, characterful poses. While other figures ponderously advance, shoulder to shoulder, these chaps are storming a beach, or on a dawn raid attacking an enemy camp.

Four packs, each of four different figures, make up the initial release. The first pack, Mortuary Men (seen above), have drawn broad swords – the type that became known as Mortuary Swords after some examples that included the death mask of Charles 1 on the hilt. They wear buff coats and could represent dismounted cavalry troopers or the officers of foot regiments.

The second pack is Forlorn Hope (seen above) and the models are open-handed with four polearms included, two halberd and two partisans.  These would make great infantry officers or troops equipped for especially hazardous, close-quarters tasks. Three of the figures have helmets and one is wearing a back and breastplate.

The third pack, the Pistoleers (seen below), are armed with the large calibre pistols typical of cavalrymen in this period. Three have a pistol in one hand and a broad sword in the other, two are helmeted, and one is in a back and breastplate. Again, these would make great officer figures or dismounted cavalry troopers.

The final pack – Dismounted Troopers (seen below) – all carry carbines and three are wearing the three barred English pot helmet which was popular amongst cavalry troops on both sides in the English Civil War. These figures are ideal to represent dismounted troopers, perhaps on a scouting mission, or holding an isolated outpost and firing their carbines.

This is a really exciting and welcome new range, designed to complement existing ranges by adding in some different options for 17th-century gamers. Ideal for skirmish or roleplaying games, they will find a home in the armies of those fighting bigger battles too, as excellent command groups or forlorn hopes. Their dress and equipment will fit in most European and Colonial American theatres from the 1620s until the 1650s, and the level of detail and crisp casting will be popular with painters.

So, span your wheel-lock, heft your halberd, and get into the action with Bloody Miniatures!