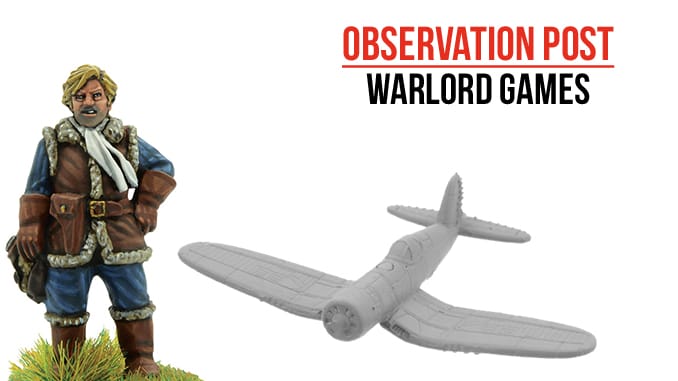 Warlord Games continue to add to their product line for their Blood Red Skies WW2 aerial combat game. There latest release cover the fictional war on the frozen Eastern Front to the reality of combat in the tropical Pacific.

First of all, we have the ace pilot Johnny Red and the Falcon Squadron. First seen in the British comic Battle, Johnny Red was a disgraced RAF pilot who made his way with his Hurricane to Russia, joining up and eventually commanding Flacon Squadron, a ragtag group of heroic Soviet pilots who fought in a number of major battles both in the air and on the ground. This was a gritty story of war, with great artwork and attention to detail in the use of real events as a backdrop to the comic book story.

Moving from the cold of the Eastern Front, we are back in the realms of historical reality with an ace pilot and aircraft from the Pacific Theater of operation. Our pilot is Pappy Bovington, a man with many kills under his belt who rose to become one of the top aces. Alongside him we have a F4U Corsair squadron, operating as fighter-bombers from US aircraft carriers in support of naval and ground operations. The aircraft continued in service up to the end of the Korean War, being superseded by newer, jet powered cousins.

These are metal cast miniatures, and come with all the cards and other game related paraphernalia for the game.It is rumoured that Warlord will soon begin casting their aircraft models in a ‘restic’ material, a mixture of resin and plastic, which could help with potential ‘topple’ scenarios.