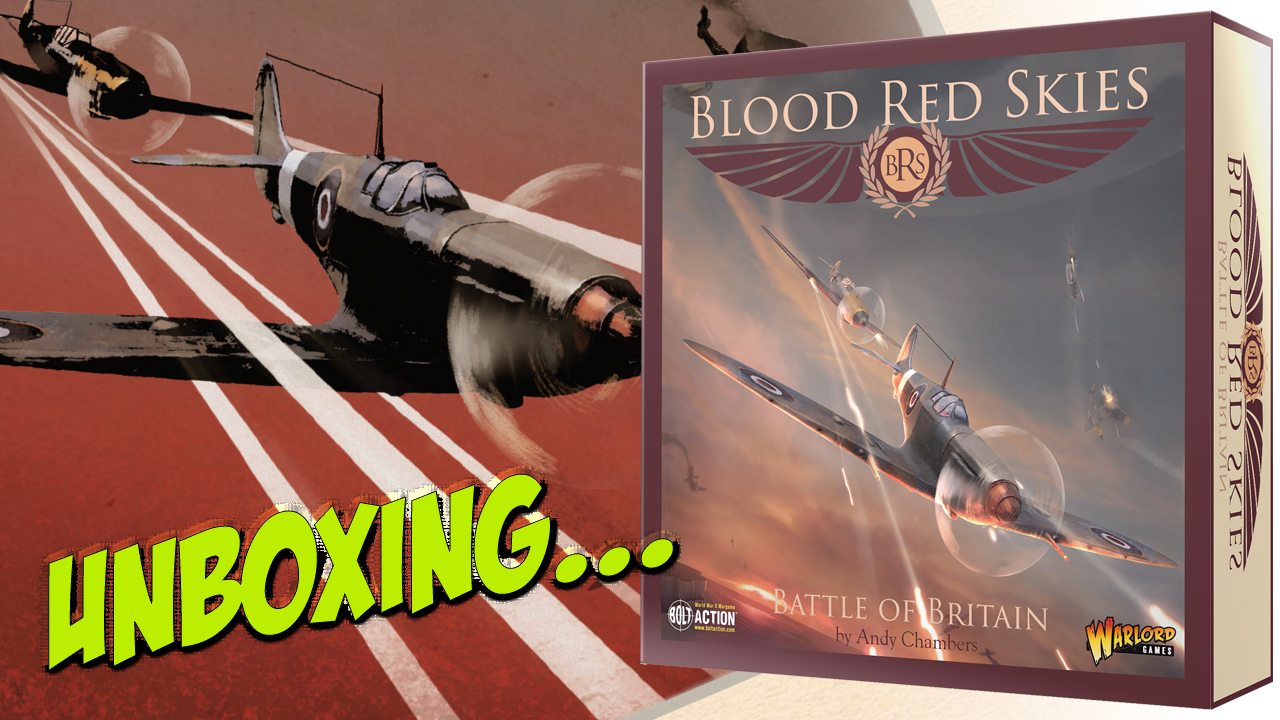 The new Blood Red Skies – Battle of Britain boxed set brings the fast and furious world of air combat during the hectic days of 1940 to the tabletop. Everything you need to re-enact the dogfights of the period is contained within this stylish set.

Upon opening the box, the eye is drawn to the three A5 sized rulebooks and the 12 aircraft miniatures, all placed within a clear plastic insert.

The main Rules Booklet is labeled ‘Read This First’. This contains a discussion of the main components in the game and the basic rules of the game, all clearly laid out with plenty of examples, both in written and diagram form.

Having gleaned the information needed to play the basic game, you’re advised to try out some of the scenarios from the Scenarios booklet.

There are five scenarios in the booklet, ranging from introductory to advanced level. Players are advised to try out the first few scenarios to get used to the basic rules and the way the scenario rules work.

The third booklet is entitled Expanded Rules, which brings in the use of Action, Aircraft Trait, Doctrine and Theatre Cards, plus Ace Skills. These all add additional layers to the gameplay, and allow full access to all the scenarios in the scenarios booklet.

Beneath the initial layer of rulebooks are the specialist six-sided dice which use the ‘five bar gate’ system, the six being replaced with the Ace of Spades symbol.

There are also the decks of card needed for the expanded rules, 10 Theatre Cards, 7 Ace Skill cards, 12 Doctrine cards and 12 Aircraft Trait cards. There are 12 plastic aircraft, 6 Messerschmitt BF-109E in light grey and 6 Supermarine Spitfire MkII in dark brown. Also included are the innovative clear plastic bases for each of the aircraft. These are movable forwards and backwards and are used to show the three possible statuses of an aircraft; Advantaged, Neutral and Disadvantaged. Lastly, there is a sticker sheet to add national markings to the wings of the aircraft.

There are 3 aircraft cards in the set, covering the Spitfire and Messerschmitt fighters and a double-sided card for two bombers, one side a German DO17 Z-2 Dornier and the other side a British Blenheim IV. These contain all the stats for each aircraft on the table, as used in the scenarios.

Lifting out the plastic insert reveals two double-sided Quick Reference Sheets and three sheets of card punch boards, again double-sided. Some of these cards are for use with the aircraft flying bases, showing the skill level of the pilot. Others define ‘terrain’ such as clouds or barrage balloons.

Lastly, there is a sheet full of all the tokens needs to play, plus a ruler designed for use in the game, an arc tool and a double-sided bomber token for use in that particular scenario.

As is the norm with Warlord’s boxed games, this is a well-designed product which shows a flair for design and ‘feel’ for the gaming genre, and the high quality of the components makes this a great looking product.

Look out for more coverage of Blood Red Skies in upcoming issues of Wargames Illustrated!