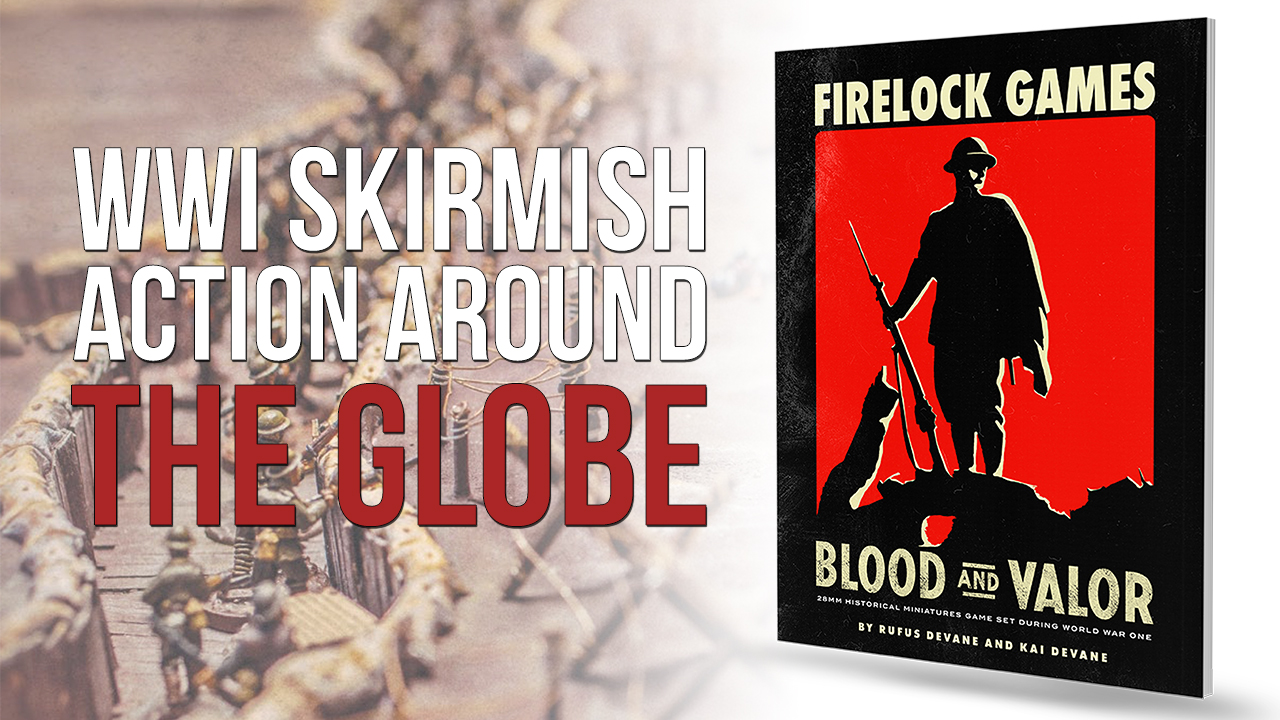 “Blood and Valor” is a new set of World War I skirmish rules designed for use with 28mm miniatures. Produced by “Firelock Games”, this 114 page hard back rulebook is the first in a line of rules that “Firelock” aim to produce, based around their very successful “Blood and Plunder” system.

The book begins with a contents page and some guidance on what dice and tools you require for the game, for those new to wargaming.  The basic rules are then outlined. These are accompanied by colour diagrams that illustrate concepts such as facing or moving to help the reader understand the trickier rules, which always helps avoid confusion.

Straight away we are introduced to an innovative new system for determining the order of play. Each army generates a number of Initiative Points every turn, based on how many command stands and standard units it has in its force. At the beginning of every round, player places a token on the table with the number of Initiative points they want to bid recorded on it. Both players reveal their tokens simultaneously, with the winner moving one of his units first.  When both8988 players have moved one unit, they bid again to “steal” the initiative and move their unit first in the next round.  When all units have moved, the turn ends. Players have a limited number of initiative points to bid each turn and so have to spread their bids, but equally you cannot blow all your points on the first round and have nothing left for the others. As armies take casualties, the number of Initiative points they generate is reduced, which in turn reduces their ability to seize the initiative. This is certainly a fun way of keeping all players engaged in the game and creating uncertainty about the order in which units will move.

Next come the rules for movement, firing and melee combat which will be familiar to most wargamers. This is a d10 system, with each figure in a unit generating firing dice depending on what weapon he is armed with. A rifle, for example, generates one d10 of firing whilst an HMG has 8d10. Every unit rolls the number of d10 generated “to hit” with a target score of 6 required, plus or minus modifiers. Units hit by long range fire or close combat get a saving throw. Individual figures are removed when killed and the unit suffers “fatigue” points for every hit, whether casualties are caused or not. When the unit reaches 7 fatigue points it is removed. This is a fairly straightforward system that should be easy for new players to pick up but has enough nuances to keep old hands engaged. This section concludes with rules on artillery barrages and gas, both of which played a significant role in this conflict.

The “Force List,” or army lists to you and I, provide stat lines and point costs for the various units within each of the national armies involved in the war. Alongside the main protagonists of Germany, France and Britain, are the Belgians, Americans and Australians. Included here are not just lists for creating a Western Front force, but lists are also provided for Ottoman Turks and Anzac forces at Gallipoli, the German and British forces in East Africa and the various forces involved in the campaigns in the Middle East. This really expands the usefulness and scope of these rules and broadens their appeal to gamers who play different theatres of this war.  Games can range from 150 points per player to 250 points for a larger game. With a standard units of four British riflemen costing 16 points and a machine gun or a Sergeant costing 20 points, you will not need many miniatures to get playing. A nice touch included with the lists are detailed stats for notable individuals who fought in the war, such as Hauptmann Erwin Rommel, Lawrence of Arabia or a certain Lieutenant JRR Tolkien. Including well known individuals like this provides a level of personalisation which is really important for a fun skirmish game, giving personalities to our otherwise faceless miniature warriors.

Next up are detailed scenarios for you to play through. Although these include Trench Raids and assaults on enemy positions, they also include more varied objectives such as the rescue of a downed pilot, a demolition raid or simply gathering intelligence. Each is presented with guidelines on laying out the table, forces involved and victory conditions and usually lasts about six turns, making them easily playable at a club meeting or for an evening game.

The final section of the book details how to use tanks in your games. Rules are provided for firing from and at tanks as well as engaging tanks in close combat, which never seems like a good idea. Stats are then provided for the main British, German and French tanks used in the war.

The book is rounded out with a substantial index, to help you find the rule you want in a hurry, as well as a playsheet and a page of tokens for you to copy and use in the game.

All in all, this is an extremely well presented book. The rules are clear and well-illustrated with diagrams and boxed text giving examples of play. The small numbers of troops required for play will appeal to those dipping their toe into a new period or for established players who just want a small game to fill a couple of hours. Extending their scope to cover not only Europe but Africa, Turkey and the Middle East really is a great idea which will no doubt extend their use to all World War I players and not just those with an interest in the Western Front. If skirmish gaming in World War I is something you’re interested in, these rules a definitely worth a look.