Blenheims Over Greece And Crete 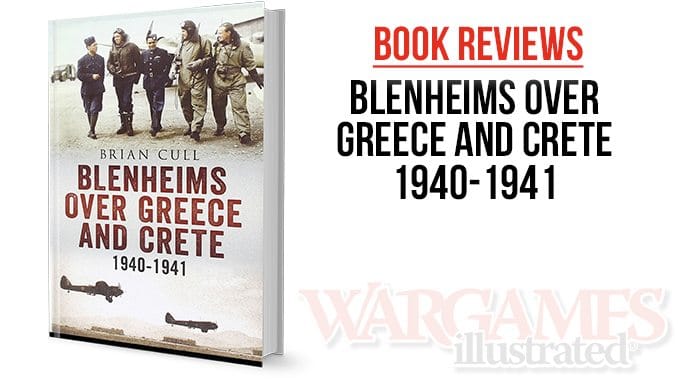 Knowing of my current World War Two Crete project, sub-editor Wayne passed a couple of related books my way. Both by Brian Cull, these are very readable accounts of some of the lesser-known aviation activity in the Mediterranean theatre.

Blenheims Over Greece And Crete 1940-1941 covers the actions of Blenheim squadrons (both Commonwealth and Greek) who supported the defence of Greece against the Italians, but were then all but swept away as the Germans entered the arena. The book has a strong family history feel to it, with contributions from descendants of airmen of both sides, and many first hand accounts; as well as air combat and bombing missions, the book covers some hair-raising incidents, such as Blenheims icing up and crashing in the Greek mountains. There are also 30 pages of black-and-white photographs which would be an excellent reference for wargamers and modellers wanting to recreate these 3-man aircraft on the tabletop or in the air. For myself, with a strong interest in Crete, the last few chapters deal with the German airborne invasion of May 1941, including the RAF crews that were left behind and fought the Germans as infantry, and the abortive attempts by the RAF to attack the Germans on the island from bases in Egypt. In terms of wargaming, despite the superiority of the Luftwaffe, there are many stories here that beg to be recreated using rules such as Bag The Hun, Wings Of War or Blood Red Skies.