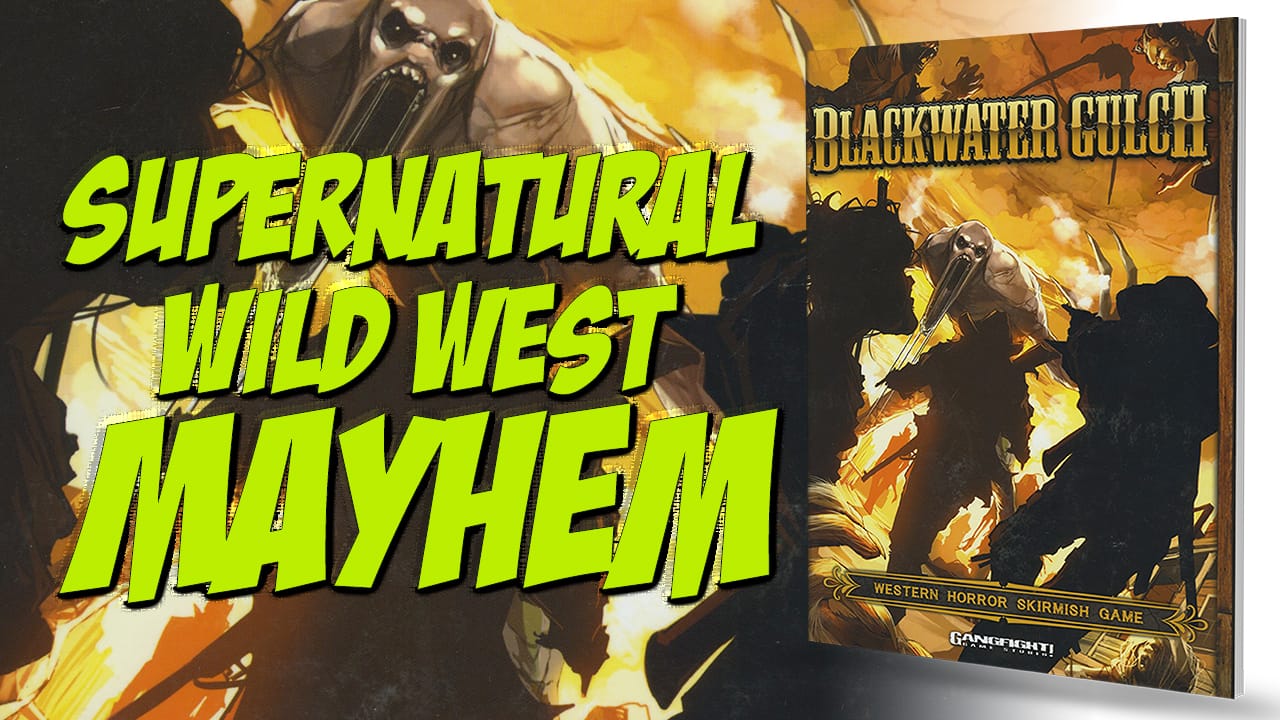 Blackwater Gulch is a 96 page hardback book, from Gangfight! Game Studio.  Subtitled a ‘Western Horror Skirmish Game’, the rules and miniatures are themed around a Wild West town that lingers next to a nexus point for evil, a gateway to hell.

The first 13 pages of the book focus upon introducing the overall setting and the town of Blackwater Gulch. A series of events and incidents help to shed light upon this unfortunate Wild West town which has become associated with death and horror, whilst offering riches to those willing or able to survive.

The Getting Started section introduces the rules, beginning with an outline of the basic requirements.  This is a D6  based system, using inches for measurement, with the average gaming table being 3’ by 3’. Miniatures wise, you need Heroes, Henchmen and Minions to create a ‘gang’.

Each character is defined by a series of Attributes, which are recorded on a card which comes with each pack of miniatures.  The game uses Attribute Rolls and Target Numbers, with the number of D6 rolled to beat a target number being defined by the attribute score. The number of successes is more important that the total number scored by the dice.

Objective tokens and Loot are noted as an optional part of games, with players providing their own markers for Objectives and having access to a series of Loot cards which can be bought from the company.

After establishing Initiative with a dice roll, each player takes it in turns to activate their characters, alternating as they go along. Each character may perform a number of actions up to their Stamina level, with the standard type of actions. Some actions, such as Change Equipment and Consume Item, have elements of the computer game about them.

Movement is dependent upon the Speed value of the character, although models may only move 12” per turn unless they have a skill, attribute or item that enables them to do otherwise. Attacking is conducted using either the Ranged or Melee Combat attribute, and has target number of 4, although this can be subject to modifiers. The action and target number system makes for quick, simple to resolve turns and keep the tabletop action going. Every aspect of the game environment is covered as simply as possible, with clearly laid out rules on terrain.

Morale and Winning are factors. Morale drops as your characters do, so once your gang falls below half strength and/or becomes outnumbered, the higher the target number to beat to stay on the table. Games last 6 turns, and Victory Points for taking out the enemy, objectives and loot are all counted.

In addition to the core rules, there are Special Rules included to add depth to the game, whether special weapon types or abilities.

The game outlines the backgrounds to a number of gangs from the background, grouped into one of the factions – Lawmen, Outlaws, Beasts and Cursed. These correspond to miniatures that have been released, but, if you prefer, you can create your own Custom Characters using the rules provided. Skill descriptions and options are noted and explained, plus Special Abilities to add those horror or magical elements.

The rules continue with the all-important equipment, which is again similar to the items found in computer games and on the Loot cards. Like many modern games, this is a narrative-led game, which lends itself well to campaign play, hence the simple but detailed rules, and a series of scenarios to help create the basics of an event that can form part of the campaign. There is also a Campaign Roster Sheet which can be photocopied, and tokens which may be used.

This rulebook is very well laid out and simple to reference, with some good use of images of miniatures, excellent artwork and approach. The rules appear simple to follow and have some factors which can be added to give greater depth. Although the supernatural elements of the game’s backstory are fairly integral, they are not essential, and the rules could be used as a ‘straightforward’ set of Wild West rules. The miniature support for the game is excellent, producing some characterful figures which come with game cards. An interesting game with room for expansion.