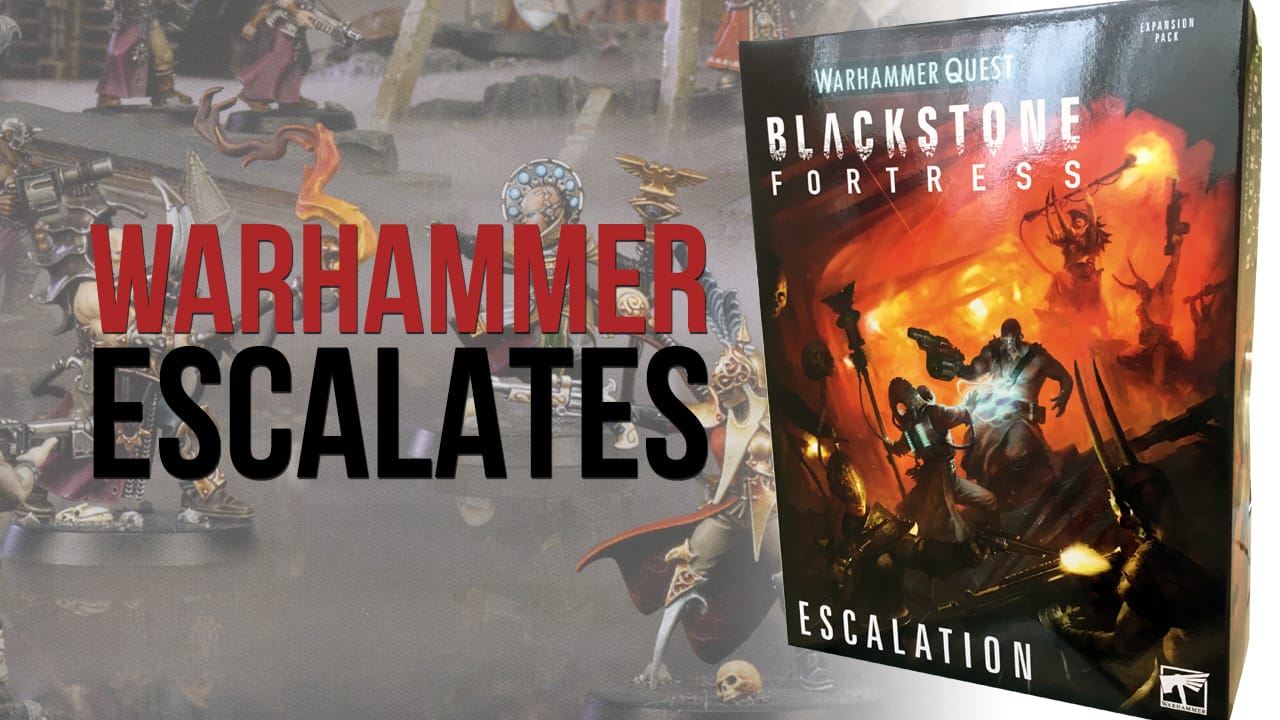 Games Workshop has a talent for releasing a wide variety of different gaming experiences. One of the latest to hit the market is Blackstone Fortress, an adventure-style tabletop game where a disparate group of characters venture forth into the environs of the titular Blackstone Fortress, an ancient piece of technology which contains all kinds of wonders… and a whole variety of perils, from twisted creatures to a constantly changing interior. The new Escalation box is designed as an expansion to this core game, providing new quests and characters, plus more foes to be overcome.

Lifting the lift of the sturdy box, the first thing we discover is the first of three books, Escalation.   This is a 23-page booklet which outlines not only the contents of the supplement but also the background behind the Quest for the Black Shrines, the adventure upon which the group of new characters will embark. Each of the characters is described, and additional details about the Fortress, the changes the ever-widening galactic war has had on the settlement of Precipice which exists precariously on the periphery of the huge structure and the new ‘Hostiles’, the Heretical Cultists who lie in wait for the unwary.

The next booklet is entitled Exploration. This is a 39-page softback, which contains details of the various scenarios that form the adventure, in the form of maps of the passages and chambers which need to be navigated, the table set-up, complete with adventure points once each area has been explored. Towards the back of the booklet are a series of special maps for each of the five Black Shrines mentioned, complete with charts for use to assess the impact of the Explorers presence in the Shrine and the potential discoveries.

Lastly, there is the 7-page Datasheets booklet, which contains all the in-game stats for each individual Explorer character and the latest Hostiles, the Cultists.

Next comes the 4 punchboards, made from top quality, durable card – the joy of a GW product is the fact that they never stint on the materials used in their games! These make up the double-sided map tiles, called chambers and various tokens.

The miniatures are lurking beneath the card punchboards, and they are worth waiting for, as usual. The red frame contains parts to create the five Explorers, each one a powerful hero in their own right, but complimentary to one another if used together. The grey frames contain parts to create eight Hostiles miniatures, a group of corrupted Cultists, with a Champion and Leader figure. This all multi-part plastic figures up to the usual high GW standard. These are the new ‘monopose’ style, where the figures may only be constructed in one pose and there are little or no spare items left on the frame. However, when miniatures are this good, why change them?

The last items in the box are the Encounter and character cards for use during play, with full rules for their use. There is also a sealed envelope entitled the Throne of Mallex, which is only to be opened by those players who have conquered the horrors to be found in the chamber of the same name. Lastly, a really nice touch is the provision of a number of ziplock bags, which can be used to store the various loose items. This is yet another example of the thought which goes into a GW product: both box and bags can be used for storing the parts of the game and carrying it all around.

Overall, this is a top quality product from a company that continues to set the standard for others to scramble to copy. In addition, the expansion materials themselves add a great deal to the gameplay, with new foes, quests and mysteries to discover. If you have a copy of the core game, you need this. If you don’t have the core game just yet, well, here’s the perfect thing to buy at the same time.