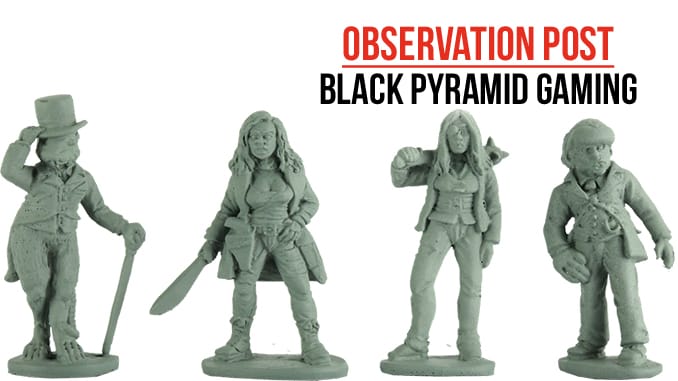 Black Pyramid Gaming have been producing the 28mm Vox Populi range for a number of years. These are miniatures produced after suggestions from customers, meaning that gamers are able to get the figures they want and the company gets to add to their range.

The first two figures we have are suitable for post-apocalyptic adventuring, perhaps after the creation of a zombie nation. The Dead Lieutenant wields a machete, keeping her revolver holstered so she doesn’t attract any additional interest. Auntie A sports an eyepatch and carries a vicious looking spiked club, her insouciant pose exuding a relaxation she probably doesn’t feel.

The second two figures are designed to fit into a more Victorian setting, especially those with a touch of the fantastical. First, we have John Merrick, The Elephant Man, who actually also bears a passing resemblance to a certain US President. Then we have the King Rat, a humanoid rodent who controls a network of criminals from behind the scenes.

Each of these figures is well sculpted and is quite characterful. The sculptor, Martin Baker, has done a great job of bringing his own unique style to the figures. Available as single figures cast in metal, the ‘pick and mix’ approach is encouraged. Of course, for those looking for some suitably different figures or are after a certain pop culture character in metal, it is worth getting in touch with the company for more details.