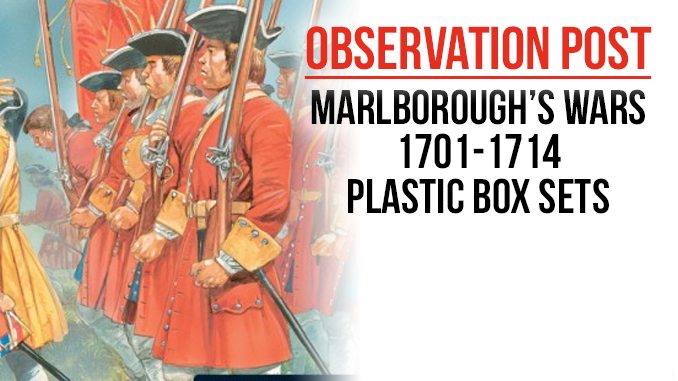 When Warlord Games formed a partnership with Wargames Factory, many people appear to have thought they would continue to provide the same products as those that had previously existed. Yet, over time, Warlord have assisted the management of Wargames Factory in re-designing and rationalising their product range, making the product more accessible and attractive to the wargaming market. The latest example of this has been the former War of the Spanish Succession plastics, which have been re-branded for use with the highly popular Black Powder ruleset.

First, the Infantry: whereas before you received 36 infantry split between a number of three figure sprues with an overly complicated layout, the new design from Warlord Games and Wargames Factory allows you to create 24 infantry, with 10 in marching poses and two usable as Command figures on each sprue. There are still options to create use Grenadier heads but the vast majority are bicorne or tricorne. Each set allows you to create 20 infantry and four command figures, with a drummer, two standard bearers and an officer with a sash. Through careful head choices and perhaps a little additional work, it should be possible to use the infantry as any of the nationalities who fought during the period covered, although the first two sets released are largely ‘themed’ by box title, artwork and the leaflet enclosed within each, complete with parts description, painting examples and flags for the relevant army – either ‘Grand Alliance’ or ‘Sun King’. Each box of infantry contains enough 20mm square individual bases for all the miniatures, although the leaflet shows the use of 25mm round and 40mm square bases, with the latter probably being more useful given the supposed rules system.

Secondly, the cavalry: In this case, the only thing that appears to have changed is the box art and the inclusion of the themed leaflets, complete with flags. This could be said to be a good thing as the original Wargames Factory design included pretty much every cavalry type in the period from 1690 right up until the 1720s. The wide range of different heads provided, plus the different torsos and weapons, allow you to build many of the different types of horseback warriors. Here we have the opportunity to create Dragoons with slung or carried muskets, cuirassiers with breastplate and ‘lobster-pot’ helmet, pistol armed cavalry ready to ride up and open fire at short range, then gallop away, and dashing individuals looking to charge in and put the enemy to the sword. You also have the ability to create an officer, standard bearer or a bugler to regulate your man, or encourage them on to glory! Each miniature comes with an individual 20 x 40mm cavalry base, although again perhaps a 40mm x 40mm base would be more useful. Again, these miniatures are fairly generic and can be used for any nation, with the leaflets and flags being the only difference.

Lastly, the artillery: Again, this set of sprues hasn’t been drastically changed but it does now consist of three sets of the same sprue rather than two. That means a whole extra field piece for your money compared to the old Wargames factory box. As before, you have the choice to field 9 or 12 pounder weapons and you receive a remarkable amount of ‘extras’ beyond the four man crew that man each weapon. Barrels, buckets and spare shot are the order of the day. Of course, that extra sprue also provides you with two extra mounted officers, giving you six in total. That means that as your force grows, you already have the regimental Colonels or Brigade commanders to manage it upon the battlefield, an essential part of Black Powder and similar mass battle rulesets. The box art and leaflet provides painting references and some ideas on creating your chosen army, and the additional parts allow you to customize your mounted officer. There are individual bases for the crews and a horse base for the officers but no base for the gun itself.

Overall, a suitable re-vamp of an interesting range of plastics that allow you to rapidly build up your forces, whilst being plastic allows you to customize as you go. It’s good that the partnership between Warlord and Wargames Factory has brought these back into circulation, providing the late 17th and early 18th Century era gamer with more opportunity to field larger armies.