Black Powder: A Clash of Eagles 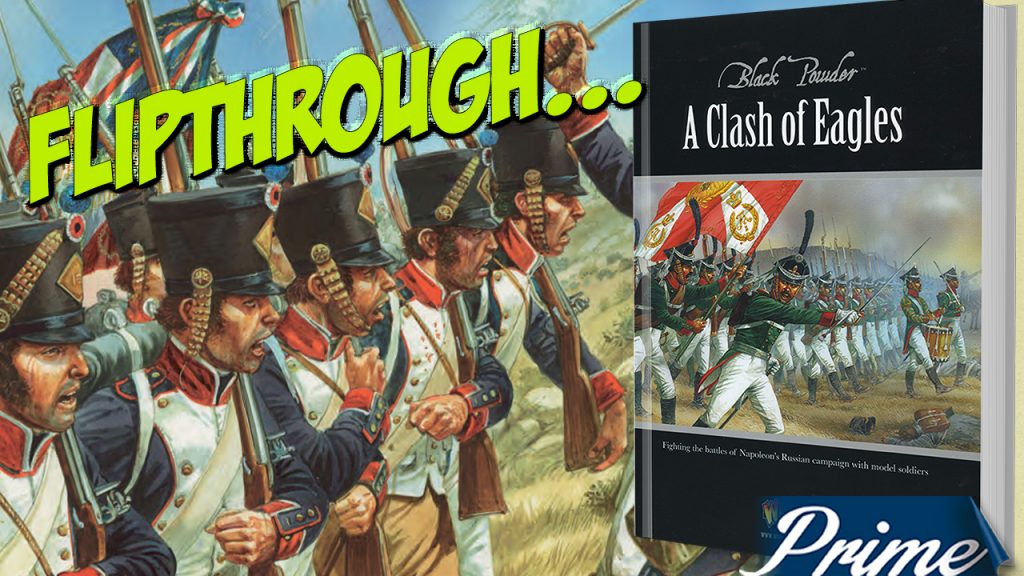 The extremely popular Black Powder rules from Warlord Games attempt to cover a whole swathe of warfare, from the 17th to the late 19th Centuries. This is largely achieved by the use of period and theatre specific supplements. This time around, Napoleon’s fascinating and ill-fated campaign in Russia is covered by the upcoming A Clash Of Eagles.

The book is to the usual Warlord high standards, and begins with an interesting introduction to the campaign, with some useful background and discussion that sets the scene for the gamer. In addition, there is a very useful overview of the Battle of Borodino, complete with an order of battle for both sides. This could be used as the focus of a new or enhanced collection of miniatures.

The Armies section contains a good overview of each force, covering types of units, their strengths and weaknesses, as well as outlining the relevant fighting style and tactics. A particularly interesting part is the use of specific rules for aspects of the different armies – for example, the advantages and disadvantages of the Russian artillery are discussed in some depth. The composition and dispositions of the French Grande Armee is also described in detail, with special rules for French Infantry being just one of the focuses.

A number of new rules are to be found in this supplement, which may be used in games set within the 1812 Campaign or indeed any other part of the Napoleonic period. There are new rules for; regimental artillery, formations, the various troop types and the options for command. Given the setting, weather plays a large role, so there are new rules for adding weather effects to your gaming, plus new ideas on how to treat various types of terrain.

In addition to the Russian and French armies, are lists for many of the smaller nations who contributed troops to one side or the other. The armies of the Grand Duchy of Warsaw, Kingdoms of Bavaria, Austria, Italy, Saxony, Westphalia, Naples, Wur-ttem-berg, Prussia and the Confederation of the Rhine are all outlined in plenty of detail, with relevant rules and force organisation. This is good news for those players looking to field something different, or adding an allied force to their main army.

Having outlined the armies, there are biographies of the various commanders, giving an insight into the approach and command style of the famous and infamous.

There are also gaming scenarios for the campaign, with maps, terrain set up advice, and army lists. However, beyond these ‘historical’ battles that can be fought over the course of an a couple of evening or day, there is also a useful section on so called Pick-Up Games, the type of games that can be easily played out over the course of a club night, with perhaps smaller forces, and taken from your own more eclectic figure collection, picked from the generic army lists.

Being generic, these army lists provide a useful summary of the composition of the whole army in one place.

Lastly, there is an appendix which provides a general, beginner’s overview of the Napoleonic armies, the various troop types and the nature of warfare in this period.

This chunky supplement does an excellent job of covering the whole of the 1812 campaign but also goes much further. There are a wealth of new rules which may be used in any Napoleonic era game using the Black Powder, plus some useful army lists that can be used to add flavour to your armies or encourage the collection of troops from some of the smaller nations. The new rules will now force a discussion before playing a Black Powder game however – “are we playing with the Clash of Eagles rules? Or just those from the core rulebook?”

The book is also a great resource for new and veteran gamers alike, providing a rapid but helpful reference point for those wishing to re-fight the relevant battles as manageable games. Also, there is advice on how to set up a quick game to be completed in an evening or over the course of a day. All in all, this is another supplement from Warlord Games that should appeal to a wide cross-section of the Napoleonic wargaming hobby, whether they use the Black Powder rules or not.