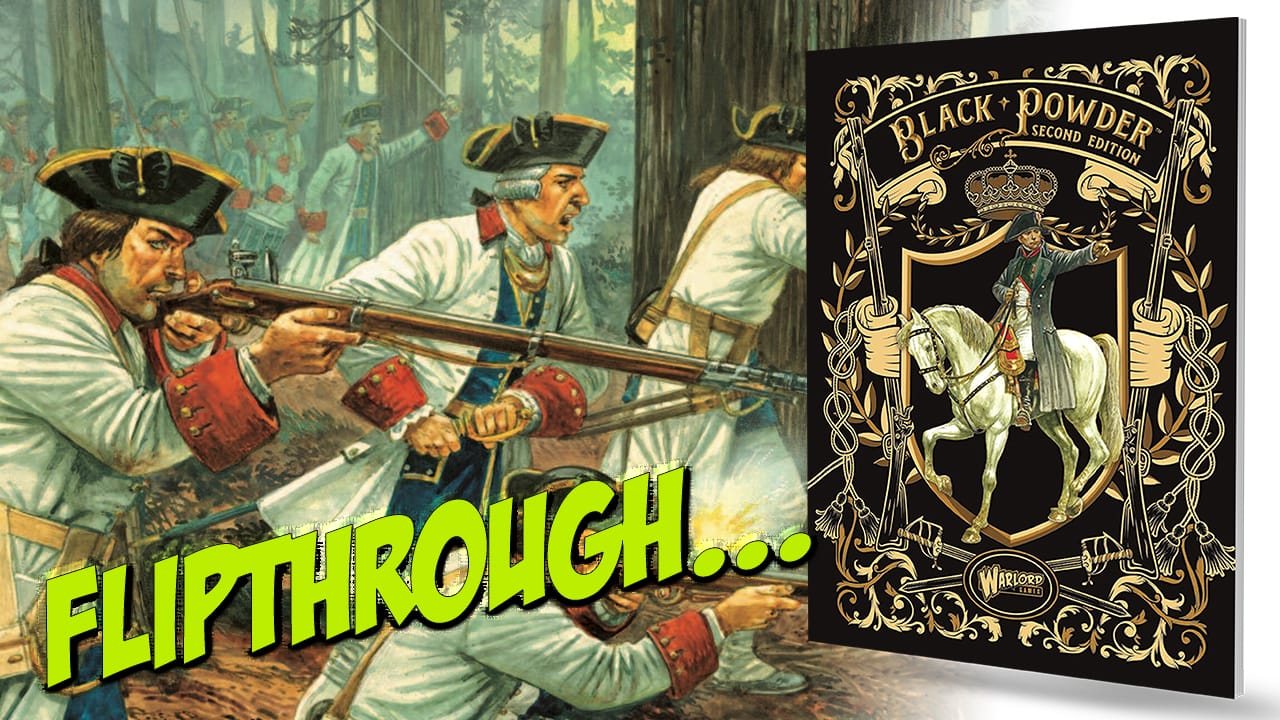 After ten years of sterling service, the original Black Powder rules have retired from active campaigning, to be replaced by a new, improved warrior, the enthusiastic but familiar youth that is Black Powder 2nd Edition.

This 200 page new tome is resplendent in a new uniform of artfully decorative covers. Packed with updated text, clearer or new rules, new photographs, and historical anecdotes, the book now begins with an oft-requested addition, a two-page contents list to ease usage.

The first changes to the rules are those regarding unit size and basing. The focus is now upon the frontage of a unit’s base rather than on the number of or way the figures have been placed upon it. Like many rulesets, this standardization of frontage makes opposing armies with a similar frontage more compatible.

Another change is to the role of the Army General on the battlefield. Taking what were once optional rules and making them integral to the game, a General may be attached to a single Brigade by being within 12” of the Brigade commander and offer a re-roll on the order dice, with this second result standing. An average result may become better or a blunder becomes a success, making Generals a useful resource in the game.

The Shooting rules and potential targets / fire arcs have been clarified by the usage of a series of very well rendered diagrams, which clearly define what is possible. The ability of Disordered units to fall back and attempt to recover is a new order in this edition, although many gamers may have house ruled this in the past. The use of Enfilading fire has been rendered less effective in this new version, as have the ability of widely dispersed skirmishers to block artillery fire. The rules state that, if firing at medium or long range, artillery may fire ‘through’ skirmishing units at targets beyond them. No longer shall skirmishers serve as ‘spaced armour’!

Other changes come in the Hand-to-Hand combat aspect of the game. Two units with the same frontage may engage one another, but other units may not charge in as well, although they may offer support. Two small units may engage one large unit, but each charge is resolved separately. Hand-to-hand has therefore become more of a ‘one on one’ affair than previously. In addition, if a unit is able to force back the enemy in combat, they are now able to follow up, continuing that combat for another round. This provides players with the opportunity to exploit sudden gaps in the line, and make sure that the unit they’ve pushed back is unable to return to the fray.

Another useful rule is regarding Broken Brigades. If a Brigade has more than 50% of its original strength either destroyed, declared ‘shaken’ due to casualties or having not returned from off-table, the Brigade is counted as Broken. However, Artillery and Light Cavalry with the Marauder rule do not count towards the starting total of the Brigade, so it could be possible to field a mixed Brigade of Light Cavalry and Horse Artillery that would never give in (useful for those gaming the ACW and General Nathan Bedford Forrest’s cavalry!)

Having learnt or re-learned the basic rules, the Advanced rules section provides new, cleaner seeming rules for mixed formations, collects specialist weapons into an Arsenal section where the abilities of Howitzers and Rockets have been changed to make them more or less effective respectively, there are rules for attacking and defending buildings that are much more comprehensive and some optional rules for adding some character to your commanders, allowing for some randomly generated foibles which can be advantageous or less so.

Lastly, there are scenarios taken from a number of different periods, 11 in total, which have maps, army lists, a potted history and more, all ready for gaming. This section also takes pains to make it clear that EVERY currently available supplement that gamers have access to is still current – this is a re-vamp without the pain, not the ‘complete re-boot, all else is obsolete’ of other companies. It should be possible to use these rules with your favourite period without having to purchase new books, as the rules changes are generic rather than specific.

This is pretty much what any gamer would request – a new edition of a popular ruleset that still works as guidelines rather than dictates, clarifies a number of points, brings in options that make the game more enjoyable and has taken account of what some gamers have grumbled about in the past. The fact that this new edition is also rather stylish and just a little, well, seductively presented, should make it a must have for the established grognard or the raw recruit alike.