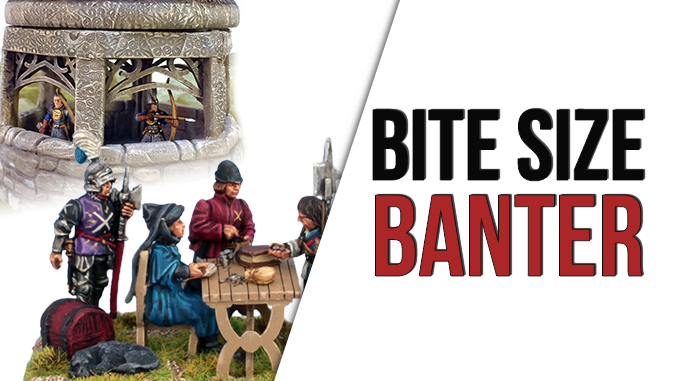 Have you been grabbing the proverbial bull by the horns whilst in lockdown and using all this extra time to maximum hobbying effect? Even if you haven’t other WI readers have and in WI Bite-size they have been sharing some of their observations, tips, projects and general lockdown banter.

Bite-size Banter is a feature in our weekly PDF magazine. What follows is an extract from WI Bite-size # 1.

INROADS INTO THE LEAD MOUNTAIN

We know there are loads of hobby based Facebook Lockdown hangouts out there, but as several of you have mentioned this one this week we thought we would give it a plug.

The challenge of ‘The Isolation Painting Challenge’ page/group is to “finish at least one miniature for every day you are in isolation, you are certainly welcome/ encouraged to do more than one a day, but the challenge is to at least do one, then post a picture of it here to share and encourage others.”.

There is certainly plenty of encouragement on there and everyone seems to be abiding by the straight forward rules of 1- Don’t be a dick, 2- No politics.

Check it out if you want to join a like-minded group of people trying to make inroads into the lead mountain.

THREE TOWERS IN ONE

The start of the lockdown signalled an almighty clear-up of my painting area and, like everyone else out there, wondering what on earth was going on. Once it was clear that the right thing to do was stay at home and that the usual diet of gaming and shows were going to be out, I got down to work on a terrain project I’d been struggling to find time for.

I also joined the Facebook group, ‘The Isolation Painting Challenge’ [Ed: See Below]. Having established that this included terrain projects, I got down to work and posted a photo of work in progress for the first fortnight. I had had a plan to build a tower for fantasy/mythological gaming on the boil for about 18 months and had bought some foam cylinders in preparation. Remembering making my first gaming tower as a teenager – a rather utilitarian cuboid constructed from polystyrene ceiling tiles and painted flat grey – I fancied doing something better this time!

So, I wanted to create a tower suitable for Tolkien’s Middle Earth, the warped folk-tale world of the Red Book of the Elf King, and perhaps Norse or Celtic mythology as well. I was struggling with the roof: pointy, domed, or open battlements? Then, I realised, if I made the top storey removable, I could do all three.

• All the stonework was scored and shaped with a blunt pencil; the ‘elven designs’ were simply created by pressing a small piece of cheap Celtic jewellery into the foam surface.

• With a tall model, some good weighting in the base is essential to avoid mid-game calamities. I hot-glued a load of old metal figure parts – broken miniatures and the remnants of old conversions – into the base to achieve this (stones or plaster would probably do just as well!)

• Storage and transport is much easier if you design your model to fit into a specific container – all the parts of my elf tower fit into a 9 litre Really Useful Box. While building, I checked the size of components to make sure that it all still fitted.

• To create the different towers, I designed components that looked quite varied but were easy to swap over. The removable roofs of my tower simply plug in with a foam cylinder; the snow on the base and porch roof is created with a piece of white fleece fabric cut to shape. The trees are twigs with a 5mm neodymium magnet (from Ebay or Magnetic Supplies) hot-glued onto the end of the trunk; with several washers hidden on the scenic base, I can place trees in multiple positions, or remove them altogether.

• I used parts from other models to customise my own: the windows and dome are adapted from the TT Combat ‘Elven Pavilion’ MDF kit; the Celtic triskele frames are from Shifting Lands and the brass door is by Thomarillion.

Peter Clarkson has spent his time constructively – (finally!) sorting out his painting station

Joe McCullough has been putting the finishing touches to the latest issue of Spellcaster: the PDF magazine for all things Frostgrave.

Simon Chick tells us about a highly impressive vignette he’s been working on.
One of Charles the Bold, Duke of Burgundy’s famous defeats was at the battle of Morat (Murten) on 22 June 1476. The duke had spent his enormous wealth on building a ‘modern’ army. He’d hired professional soldiers from across Europe, including Italians, Germans and English, and created a military structure based on Companies, with written instructions on arms, training, tactics and discipline. Yet he was comprehensively beaten by a confederation of Swiss cities and cantons at Morat for one single reason – most of his troops were waiting to be paid!

The Burgundians had been besieging the walled town of Morat and Charles expected a Bernese – led Swiss force to attack for several days. For largely unexplained reasons, on the 22 June he decided that no attack was likely and so decreed that his Companies’ Captains should make arrangements to pay their troops. Unfortunately this was the moment when the Swiss suddenly attacked from nearby woods, in significant numbers, and overwhelmed those left on the defensive lines.

There is a plan afoot for The Bodkins* (a loose affiliation of gamers comprising Dave Andrews, Matt Bickley, David Imrie & myself) to put on a demo game of Morat in the near future. I love adding small vignettes for games, especially to populate those areas of the table where the main gaming is not happening. They add interest and help create a flavour for the period or specific battle. For Morat the table layout needs to include the Burgundian siege lines and encampment and so adding a group waiting to be paid, seems an ideal piece.

The soldiers waiting in line were selected for their passive poses and most are Perry Miniatures metals from their Labourers and Italian Carroccio packs. Most figures have had some form of minor conversion, as I wanted to depict them not waiting in full battlefield kit. So the addition of sunhats, covered longbows and a crossbow seemed appropriate and these items were selected from different Perry plastic sets. A couple are conversing and another holds his coin bag tightly, whilst gazing at something in the distance, near the woods. At the end of the line is a crossbowman swigging from a pottery cup – a Foundry figure sculpted by Dave Andrews.

Moving to the Company’s clerk and his table set up for the payments: the seated clerk is made of three parts – his body is a cut-down Foundry medieval figure holding some parchment, his replacement head is from Perrys’ WotR Mounted Knights box and I extended his body that sits under the table with Knedatite putty. The soldier receiving his wages is another Foundry Swiss figure – spot on for this vignette. Another Perry metal clerk and guard from the Ducal Household look on and ensure all payments are made according to instructions. The furniture is 1/48 dolls house mdf Tudor pieces by www.petitepropertiesltd.com, who make lots of useful bits and pieces. On the table are coins I made, from fine slices of a plastic axe handle from another Perry plastic boxset.
So, a little narrative group that will one day be something to spot within the Burgundian camp at the battle of Morat.

You can see more of Simon’s Burgundian army on his blog: je-lay-emprins.blogspot.com.

ODDS BODKINS*
Check out the amazing Bodkins Battle of Crecy game in The Wargames Illustrated Vault and on our YouTube channel. Just search both for ‘Bodkins’.

Koen Windels finds a good use for scape MDF.

I know quite a few gamers have purchased one or more of the myriad of MDF kits that are available these days. Though these kits are ‘optimised’ in order to get the maximum amount of model from the available surface, there is inevitably some left-over scrap material. The straight bits are easily recycled for your own scratch-building projects, but a good use for the more irregular parts is not always so easy to find. I decided to use them as bases for rubble piles. Even sticking two bits together with the straight edge to enlarge the available area.

The rubble piles themselves are very easy to make: build up the area with wood filler, press different sizes of grit, small stones and the occasional broken coffee stirrer into the filler, prime, paint and hey presto – nice irregular shaped rubble piles.

WHAT ARE YOU GETTING UP TO?

We’ll looking to keep ‘Bite-size Banter’ going for as long as we are all in lockdown, get in touch and let us know about any of the following –

1) Online campaigns and wargames you are playing (virtually) with friends.
2) Recommendations for books you are reading or movies you are watching.
3) Terrain you are building.
4) Buildings you are putting together; scratch-built or flatpack.
5) Forces you are building.
6) Figures you are painting.
7) Have you recruited any of your family/household as lockdown wargaming partners!?
8) Is your wargames club/group getting up to any virtual/online activity (I know one club who are having a military quiz night!)
9) Anything else you think other wargamers might be interested in hearing about.
10)… Can’t think of a tenth, but you can’t have nine things in a list.
Ideally your post will be 50 – 500 words long. Any accompanying photo/s would be appreciated.
Email us at wi@wargamesillustrated.net.