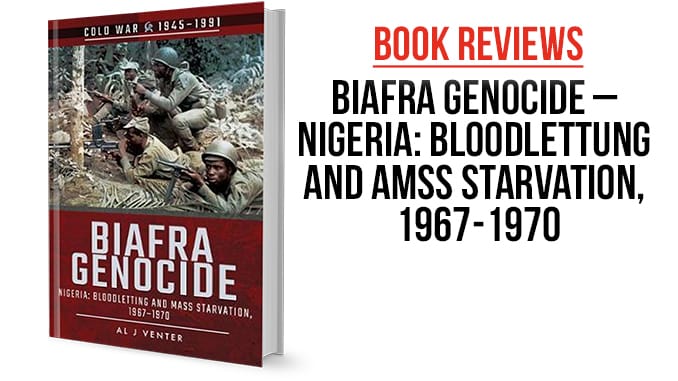 People of a certain age will remember the archetypal “Biafra Children”, starved and dying infants, victims to a ruthless African war almost forgotten. In fact, few today could put a finger on a map and say with certainty, “Here, here is Biafra!” It is a story of an ultimately senseless war fought along ethnic, tribal, and religious lines, that seems to repeat itself with alarming regularity, and that claimed many more civilian than military lives.

Al J Venter’s book brings this conflict vividly back to memory, not the least because he personally witnessed it. And because he has a certain knack for telling a story. Having said that, much of the book is indeed very like the old colonel telling his war stories over a glass of port in the club, Boy’s Own with a dash of jingoism. “Biafra Genocide” is relatively low on hard, detailed facts, high on “creating an atmosphere”, with added self-promotion. Readable, but maybe not the comprehensive history you were looking for.

The book ultimately has the feel of a bunch of (at times maybe unreliable?) reminiscences, peppered with some snippets of fact to bolster its credentials. Frequent name-dropping and unnecessary repetitions do not help. Neither do references, always in inverted commas, to the “Racist South” … as if apartheid South Africa wasn’t. A historian will walk away from it with an unsatisfied feeling, of a story not being completely told, of white mercenaries and Sandhurst-drilled chaps being far more important than around 1.2 million dead Africans. Even the Soviet-supplied MiGs become only effective after South African mercenaries with a grand total of three hours training fly them, the experienced Egyptian pilots being written off wholesale.

But for the wargamer this book might be an inspiration. As said above, it is readable, and (like Forsyth’s “Dogs of War”) a good primer to the “feel” of a post-colonial conflict in Africa (from a certain perspective). While there is never a moment when grand strategy, or even strategy, raises its complicated head, it provides inspiration in word and image for many a skirmish scenario. If you can stomach the background of one side simply gaining the final upper hand by starving the other side to death.

Secession wars and civil wars are dirty, and the Biafra conflict was one of the first where the eyes of the world were getting glimpses of this ugly reality in (almost) real time, albeit heavily edited by the respective propaganda machines. This propaganda still continues, Radio Biafra (based in London) even today supports secession and is jammed by Nigeria, where official history still conveys a rather “interesting” version of events as well.

The truth? As always somewhere in the middle … but Venter’s book won’t really help you find it. Take it as another piece of a jigsaw puzzle, as another collection of personal notes from a complicated conflict. And best take it with a grain of salt.