Beyond the Gates of Antares Ghar Empire Starter Army 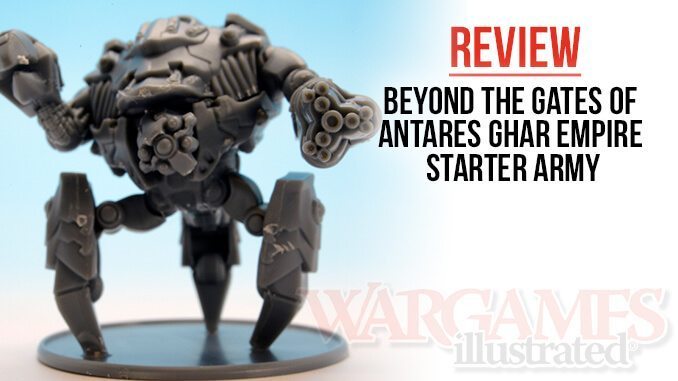 Beyond The Gates of Antares is a game set amongst the ongoing struggle between disparate factions in a sci-fi universe beset by war. Yet all the currently available factions have one thing in common: they consist of beings that can trace their origins back to human ancestry. Which, in the case of the Ghar, is pretty hard to believe.

The figures in this starter army comprise a basic force drawn from the Ghar, a race bred for warfare but one that is physically weak. To offset this, they routinely encase themselves in a version of powered armour which has a host of weaponry. The main focus of this boxed set is therefore the plastic sprues, which enable you to assemble nine Battlesuits in all, six being configured for general usage, and three designated as Assault or close combat versions. These go together very easily and I like the design, it is suitably different to the classic ‘man in a suit’ and is more akin to the world of anime or manga where the operator pilots an armoured suit rather than simply wears it. The tripod configuration of the legs adds to the sense of ‘alienness’.

This sense of the ‘other’ is only enhanced when you take a look at the Outcasts, poor unfortunates who, in the game background, are forced to enter battle without protective Battlesuits, largely due to some transgression. These are some of the strangest figures I have ever seen. I would say that they look like shaved chimpanzees but they are far more than that. They genuinely convey a sense of psychosis and fear, with the sculptor clearly having enjoyed putting a little bit of extra character into each one. They are also backed up by a support weapon, a Disruptor Cannon; basically a heavy weapon mounted on the bottom half of a Battlesuit. I like this a lot but the loader figure which comes with it, tentatively reaching up with a drum magazine, is probably the favourite of these pewter miniatures. The four Flitters, a type of robot drone, present additional backup for this starter army. Each one comes with a flying stand and has a significant role to play within the rules.

Overall, this is an excellent starting point for anyone looking to get into the Beyond The Gates Of Antares game. You get a balanced, varied force in the box, as you do for the other factions. The plastic figures are easy to assemble in a range of poses and the metal miniatures show that some thought has been put into conveying the overall character of this violent offshoot of humanity. If the idea of a borderline psychotic race with some fairly advanced weaponry with a slightly anime feel appeals to you, this is the place to start.