Beneath the Lily Banners: With Talon and Claw 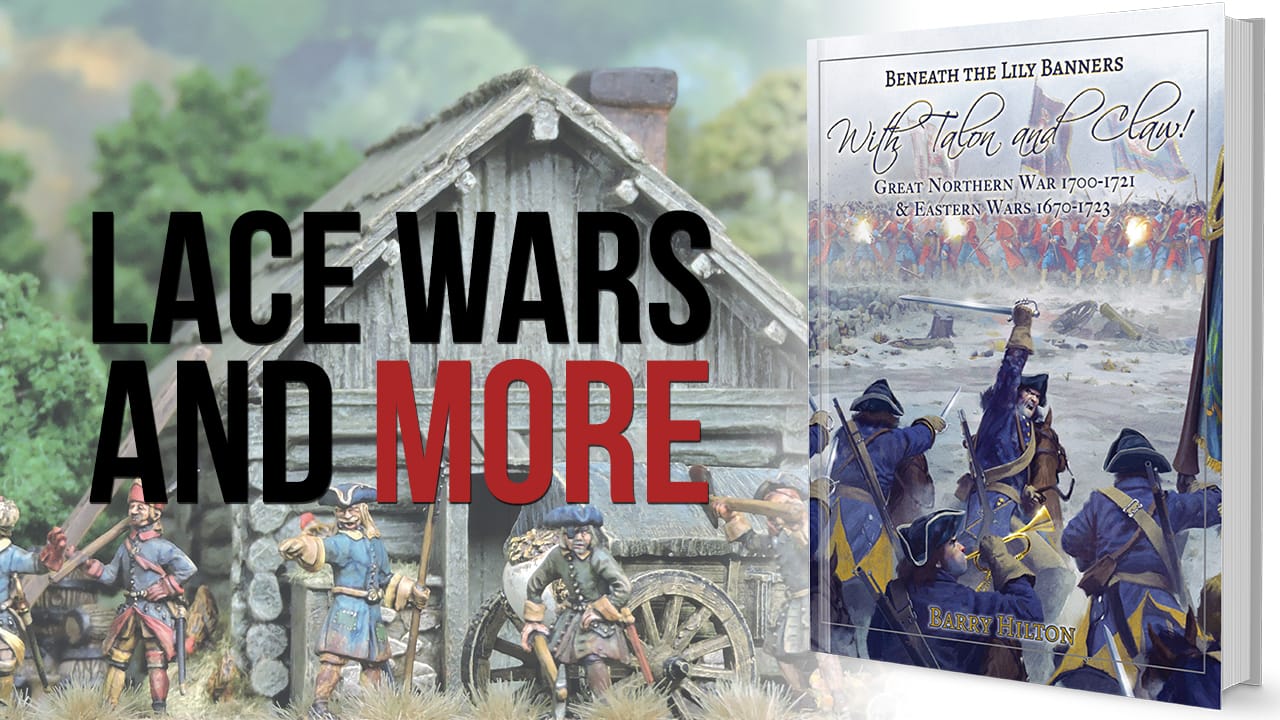 Compatible with Beneath the Lily Banners 3rd Edition: The War of Three Kings, the new With Talon and Claw supplement adds additional levels of detail to games set during the Great Northern War 1700 – 1721 and the Eastern Wars 1670 – 1723. A 183-page hardback book, this is a blend of historical facts, gaming rules and uniform resources that looks great.

The book begins with a very useful ‘Period Primer’ which pretty much outlines the many and varied wars which may be gamed during this period. In a sense, this is a potted history of many forgotten or poorly remembered conflicts that took place. A nice touch is the use of a campaign map which puts into further context where and when things happened.

The book then moves towards an attempt to formulate a points system,  takes the reader through the main rules as they pertain to the various styles of leadership, the various troop types peculiar to the various wars and how they were organised, the particular qualities associated with different troop types, national characteristics, how to base your models and tabletop unit sizes.

Another feature of the book is the fact it adds some unique rules or extras to the turn sequence outlined in the core rulebook, such as the Swedish double order option, plus pages which highlight particular styles of combat and battlefield features. There are some very well done examples of movement conveyed using photographic examples of the same, plus charts and tables which summarise what has been outlined over previous pages. An overview of the effects of local weather and terrain adds more to the rules, by adding such local phenomena as frozen lakes, extremes of temperature, and more.

The book continues in a similar vein, providing additional rules for charging, shooting, artillery, close combat and much more. The effects of morale for different nationalities and troop types is examined, again with suitable charts and rules.

After all those rules and national characteristics, players will have probably decided which army they’d like to run. That’s where the next sections come in, bringing some comprehensive information on various armies, plus some excellent uniform plates with regimental and flag guides.

Lastly, the book provides a ‘sample scenario’, more a battle report, an account of the Battle of Vlasivka, 1709,  which covers the main forces involved, table set ups, regimental uniforms and flags, and some exceptional photographs of figures on the tabletop, plus a turn by turn account of a re-fight.

This rulebook has many useful facets that really aim to support the gamer and provides a great starting point for those looking to re-create particular forces or wars. The real joy of this supplement is the fact it packs in so much into a few pages, and does it with some style, thanks to the use of photographs of wargames figures ‘in action’ and some excellent and helpful uniform plates.