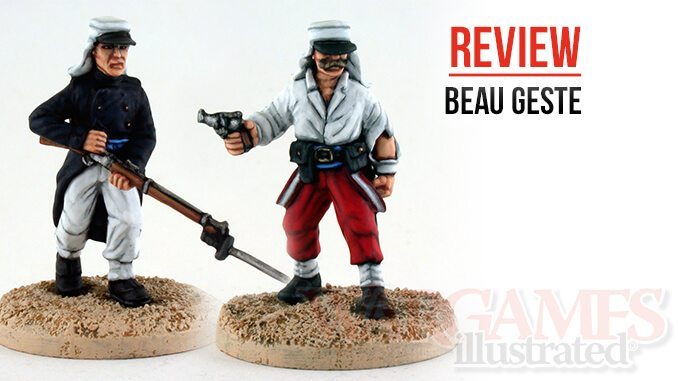 The Gary Cooper figure is in standard FFL kit and armed with a Lebel rifle with fixed bayonet. While the Sergeant Markoff figure is in shirtsleeves, with one sleeve torn open.

PROS: Both figures are sharply sculpted with believable poses, and nicely cast; very little cleaning is needed to remove the odd mould line or flash. Even though they are Beau Geste characters, the figures can be used as any Legion officer and soldier, and should fit well with mixing in with other ranges.

CONS: While it would have been nice to see the Sergeant Markoff figure wearing a coat (in order to blend in with the rest of the unit), the figure does have a nice pair of braces hanging down beside the hips, which is a neat touch.

SCOPE: These figures are two more nice FFL and movie fame characters (like the Stan and Ollie ones!), and will fit in and provide much use with any 28mm FFL gaming collection, whether army or skirmish level.