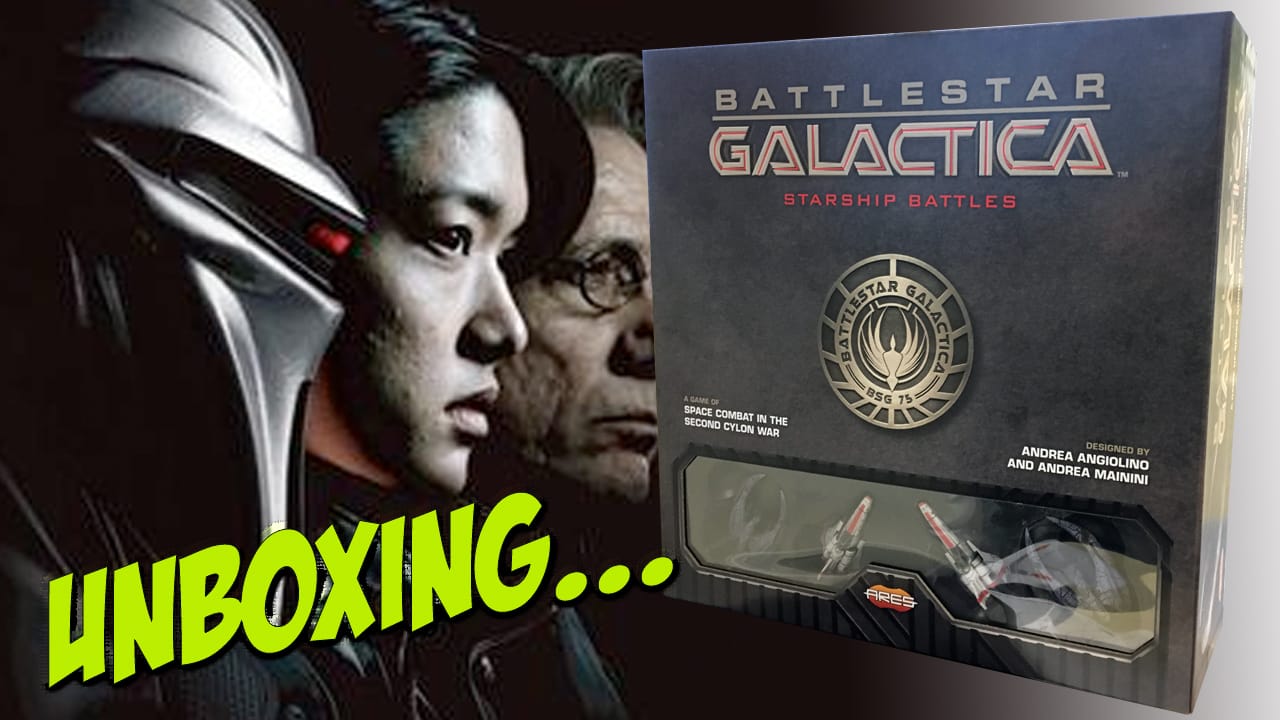 Ares Games are close to releasing their most hotly anticipated games of the year, the Battlestar Galactica Starship Battles miniatures game. The starter game contains two opposing forces from the Second Cylon War, but the rules manage to cover the whole movie and TV franchise.

The box itself is well designed, with a plastic window revealing the miniatures included and, when opened, two cleverly designed plastic inserts which can be used for storing the miniatures and all the other components.

The first insert is all about the miniatures, with two Viper Mark IIs and two Cylon Raiders. These are fully painted plastic miniatures.

The level of detail on the paintjobs is fantastic, even down to the tiny lettering found on the originals. One Viper bears the call sign ‘Apollo’, as used by one of the main characters in the re-imagined TV series, and the other has the name ‘Hardball’ proudly displayed.

Each of the miniatures has a hexagonal hole into which the innovative translucent bases fit. Equally innovative are the four plastic control panels which are used in the game to chart the speed, kinetic energy produced and more for each ship. These are all top quality and ingenious products.

After lifting the first insert, we come to the rulebook and scenario booklet. The main rulebook is only 31 pages long but manages to pack in a great amount of detail, whilst also being well laid out and full of images from the 2004 TV series.

There are two levels of rules, the Quick Start and Complete versions. The Quick Start rules lack the depth of detail of the other, but serve as a basic grounding. By using the Complete rules, they manage to cover that perennial desire of starship rules, the issue of inertia. Basically, every action in space generates a certain amount of kinetic energy – you may move forward, then turn, but the energy generated in moving forward means that your ship will still move at least some of the way in the previous direction. It’s a difficult thing to simulate in games, but the rules here are both simple and ‘realistic’ to what is seen on the TV.

Ship movement is based upon a series of Maneuver cards, one deck per fighter, which are chosen from and placed on the table each turn. The distance moved is judged using the fairly heavy cardstock rulers included, with three punchboards of similar gauge card tokens to define the statuses of each vessel. The fourth punchboard consists of 2D space ‘terrain’, single planetoids and groups of asteroids printed in full colour on some thin but durable cardstock.

The Scenario booklet is largely focused upon the first season of the 2004 series, 8 pages in total, with advice on actually linking the scenarios to make a campaign.

The remainder of the game components focus upon the pilots of the fighters and the basic stats for each vessel. There are cards for each of the Cylon Raiders and Vipers, plus ‘character’ cards for two different Cylon ‘pilots’ and Lee Adama, known as ‘Apollo’.

Each pilot has slightly different skills and talents, which are represented using a noted selection from the Talent deck. Apollo also has a noted Flaw, which is also represented by a card.

Lastly, there is a pair of six sided dice included, completing the basic equipment needed to play.

This is an excellent product that manages to embrace the subject matter extremely well. The level of information and quality of the components is of a high standard, and a great deal of thought has gone into making the box itself useful to the gamer.

All the cards and booklets retain the ‘cropped corners’ look of the TV show, an obvious fan pleaser and a nice touch which must have taken some extra work to organize.

The rules are designed to cover all aspects of the 2004 TV series and there are many expansions planned, including some from the original 1970’s movie and TV show. All in all, this is a great looking product with some thoughtfully crafted rules, excellent miniatures and an appeal to fans and general gamers alike.