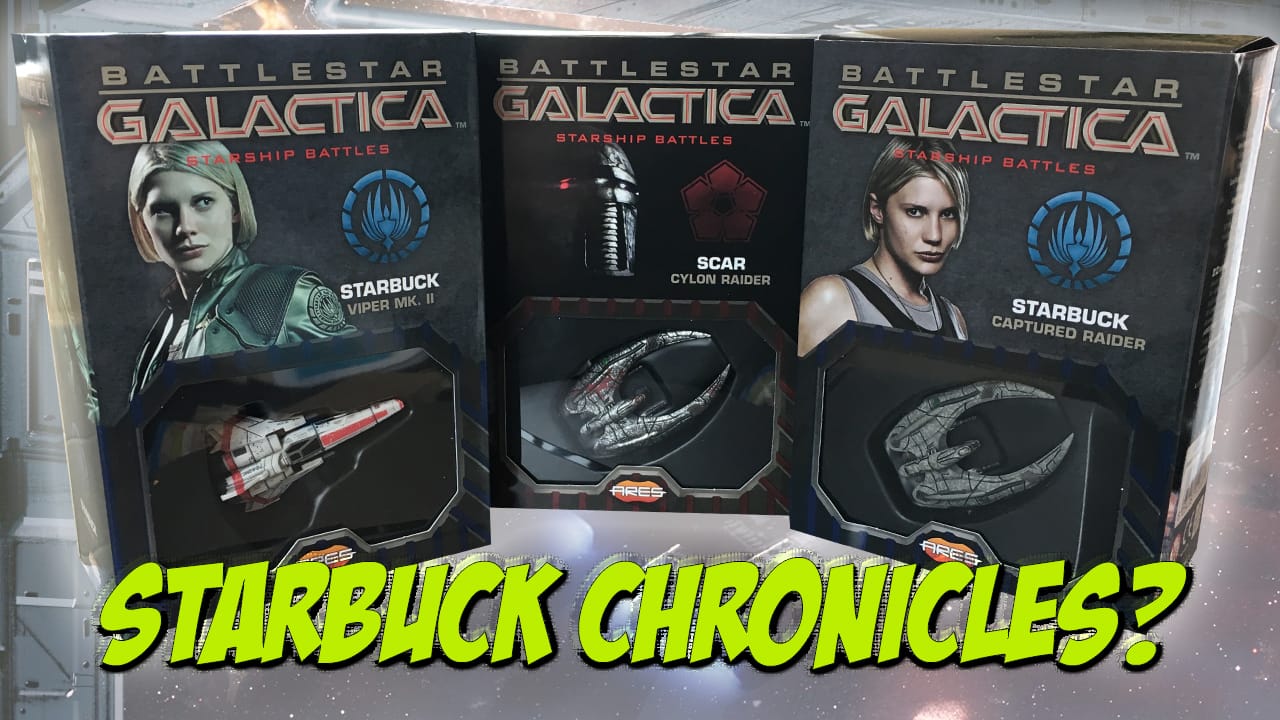 When Ares Games released their Battlestar Galactica Starship Battles core boxed set, we got the chance to review it. Doing this job week in and week out, it sometimes takes a lot to get me excited. The core set was that product, based upon one of my favourite sci-fi TV shows of all time (both the 1970’s and 2000s versions). And no they have added the ‘story’ of Kara Thrace, the top fighter pilot from the re-imagined BSG TV show, whose call sign Starbuck is almost a coffee shop.

There are three aspects of the story of Starbuck reflected in the three expansions we have. The first is Starbuck in her Viper Mk. II, the trademark vessel of the series and the main fighter available after the TV show gets going. The Viper has Starbuck’s call sign, number and name upon it, using the type of lettering one struggles to see, and comes fully painted. This expansion also has a gaming base, ship card, a maneuver deck and a set of pilot cards that let you use this strong-willed warrior in your games.

The next fighter is from another seminal part of the Starbuck sags, this time a Cylon Raider, the bio-mechanical fighter which the Colonial Fleet encounters most often. However, this particular Raider is based upon the vessel used by Starbuck to escape the atmosphere-less planet she lands on during Season 1. So, we have game cards for not only a standard Cylon ship but also the same vessel as piloted by Starbuck herself.

The last fighter is another part of the Starbuck saga, and the TV show as a whole. This is a Cylon Raider, nicknamed ‘Scar’ by the Colonial Fleet pilots, which manages to take out a number of pilots during Season 2 of the show. ‘Scar’ is an excellent pilot, with the belief being that the Cylons have used their ‘resurrection’ technology to bring the same consciousness back many times, learning from each defeat until it is an ‘ace’. Although eventually taken down for good during some teamwork between Starbuck and another pilot called Kat, the pack comes with game cards and materials, and acts as a counterpoint to the Colonial ‘ace’ pilots.

As a fan of the show, these are welcome additions to the ‘story’ of the show, as played out on the tabletop. However, in terms of component quality, thought and execution, these are really great examples of what can be done. Yes, it is to a certain extent the ‘X-Wing model’, but I do think that Ares Games have taken that concept and pushed it further in terms of quality and potential narrative gameplay. Now, bring on the Viper Mk. II and the Raptor!