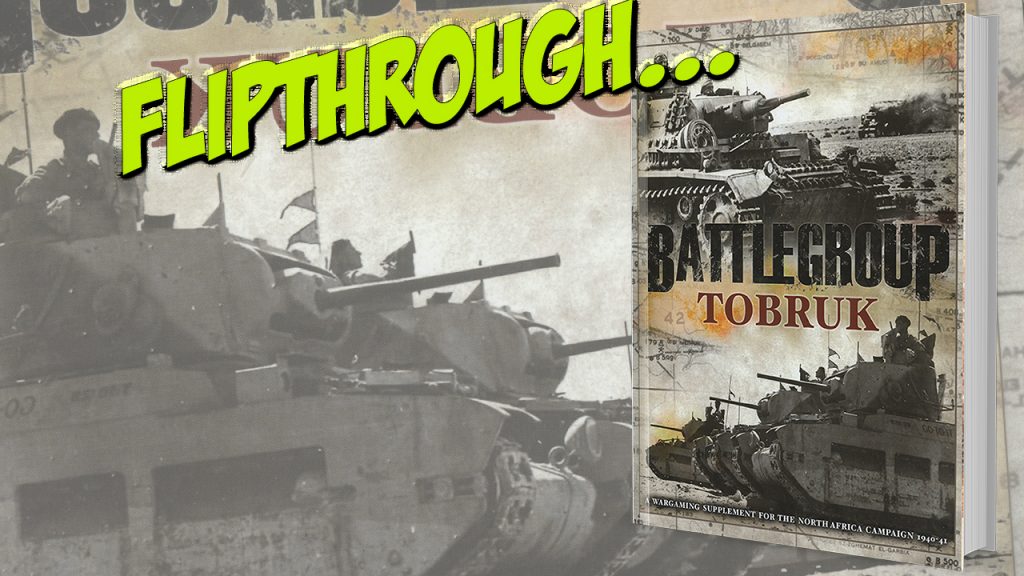 The latest supplement for the Battlegroup World War Two game is themed around the battle for Tobruk in 1940-41 but also has some ‘extra’ information on other locations as well. As always, this is a hefty, hardback book with pretty much all you need to take the war into the desert.

The book begins with an historical overview of the actions around Tobruk, complete with a map and detailed force breakdown for all the main combatants.

However, the book goes beyond that particular location, and includes details on the little known East Africa Campaign, plus Operation Mercury, the German invasion of Crete. The latter includes suitable army list information and rules for the paratroop drop and the defence.

There are a number of Special Rules included in the book, designed to give your Battlegroup battles a suitably ‘desert-y’ theme. These serve to reflect many well-documented aspects of desert warfare such as wear and tear on vehicles, dust clouds, running low on fuel and more. There are also Army Lists which enable you to field units from all three of the nations involved, which cover everything from frontline troops to support and logistics elements.

The ‘Battles In The Desert’ section contains rules for using terrain in your games, and a number of scenarios, plus army lists for the British LRDG and Italian Auto Saharana Patrol. There is also a campaign system designed to simulate parts of the siege of Tobruk, with scenarios from the beginning of the siege up to the end.

Following the aforementioned Operation Mercury rules and lists, the Appendix contains pretty much everything you’ve read about as quick reference sheets, removable data cards and relevant tokens to aid you during game play. These are a nice touch and very useful.

This is a great resource for those looking to try out more ‘realistic’ WW2 actions during the early war period. The Battlegroup rules are known for their attention to detail but also for ease of play. In addition, the level of historical information is exceptionally good and provides all sorts of access levels for the casual and ‘true’ historical gamer alike. The use of period images and photographs, plus the clear layout, make this an easy tome to read and use during a game. A quality product for those who want to game World War Two rather than playing at it.