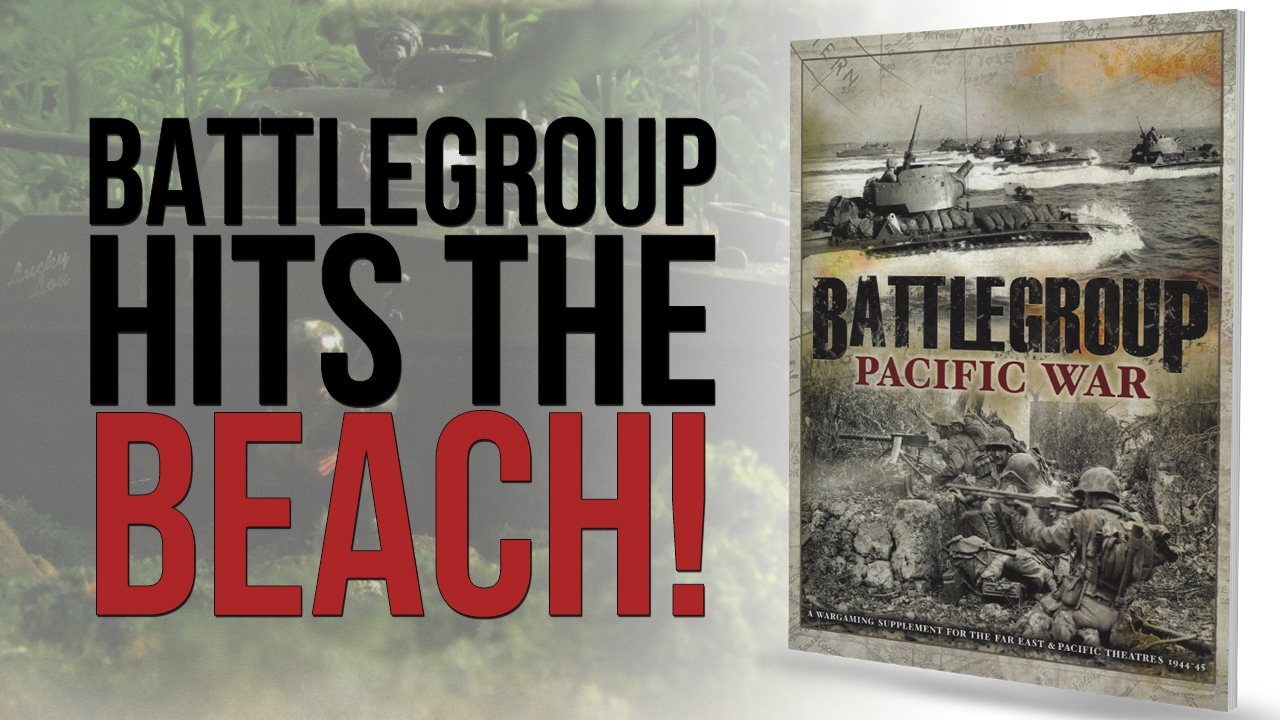 It only seems a couple of weeks ago that we were reviewing a supplement for World War Two in the Pacific… And that’s because it was only two weeks ago but now is the turn of Battlegroup from Plastic Soldier Company to join the Pacific war arena.

Battlegroup Pacific War is a 204 page hardback with 6 additional pages of removable reference material; it covers the whole World War Two Pacific campaign from start to finish. Thirteen chapters provide you with a historical overview, new rules, scenarios, and army lists for the combatants. The book is further divided between the island-hopping US experience and the jungle foot-slog of the British and Commonwealth forces.

First up is a history of the Pacific War, which gives a comprehensive synopsis of the overall progress of the war. As well as a standard narrative it has small box outs that highlight some interesting aspects of the campaign. The Alamo Scouts and Ki-yoshi Kam-i-ko being two that stood out.

After the history lesson comes the first of the game additions – special rules that apply to the Pacific War. This section is named Downfall, after the Operation to take the Japanese home islands.  It is here that the Japanese lack of material but surfeit of bravery is modeled. From the Banzai Charge to the Love for Emperor – which allows the Japanese player extra Beyond the Call of Duty rolls. Japanese models will often need to be rooted out to a man while the Allied player is trying to cope with less than eager War Weary troops.

Of course It wouldn’t be the Pacific theatre without an Amphibious Assault or several! These kinds of scenarios are much more prevalent here than any other campaign book and there’s a lot to digest in a very short space in the book – the amphibious assault rules being designed to work with the existing rules rather than replace them. One stand out point is that swimming infantry are in real danger of taking casualties and players should note they will lose all special weapons other than small arms.

At page 52 we begin the Army lists intro, and we note that the Japanese player is allowed a maximum of 9 platoons in a Brigade sized game, have fun moving those around!

Of the Army lists themselves the Imperial Japanese Army is up first. Beginning with a discussion of the forces and equipment used, we then move onto the army lists proper.

The Last Remnant Platoon is here with the infamous unarmed squads, but they can only be taken if you have taken the HQ option of Kōfuku Shinai. Interestingly you won’t know how many troops you have in the unarmed squads until the start of the game as you roll 2D6 for each squad.

Hot on the heels of the Japanese (in more ways than one) are the US,. Following the same format as the Japanese list there is discussion of the Army and US Marines along with their equipment. After this the first list is the US Marines and the Fire Team structure which is very interesting, giving the Marine player a lot more flexibility in roles and equipment than most infantry get. The Infantry Division doesn’t get as much flexibility, but does get access to a self-propelled howitzer which will be very useful for clearing holes.

Terrain is up next, with descriptions of the various types of terrain that can be expected to be found in the Pacific including the famous jungle and infamous coral outcrops. Your battles will be fought over some very difficult terrain at times, yet also might be devoid of any cover when attacking from the beach.

All that terrain is going to be used in the following scenarios: five in all, detailing actions from the Pacific War. There are two from Peleliu, two from Okinawa, and a general amphibious assault scenario. The historic ones include suggested forces, while the Amphibious Assault scenario provides some extra rules for assaulting via the beach. This final scenario could easily be adapted for other theatres, and any what-ifs you wish to fight. And remember at the start of the war it was the Japanese invading not the US!

You may have wondered where the rest of the Allies are and we now get to Burma, with a potted history of what went on from 1944. Sadly, the earlier fighting is not covered.

The Army Lists start in 1944 as well. There are Gurkhas and Veteran Assault troops if you want to add them. And there are adjustments on the final two pages of the Army List for fielding an Aussie themed force, like the Aussie Infantry Platoon – which surprisingly doesn’t have a Veteran option.

Almost at the end we have the Appendix, which is more a series of appendices. These cover the various bits of equipment the combatants used. Tanks, guns, aircraft – they are all here. And it is here you notice where the Japanese had their deficiencies – their armour is certainly the worst of the three forces.

The book ends with the six pages of pull out sheets which provide you with vehicle cards for easy reference, tokens for use in the game and a card reference sheet. I would laminate the reference sheet for longevity as I’m not sure how long the tokens will stand up to use. One small error is the use of “British Small Arms” on the Japanese players pull out sheet, although I am sure we can find evidence of the British using a Type 96 LMG somewhere!

Overall this is a comprehensive very well-researched book, Warwick Kinrade certainly knows his stuff. It does seem somewhat skewed towards the US Marines Corps, even though the Army did more of the fighting. And I would have liked to have seen Chinese information to cover that part of the Eastern fighting, especially as they are unlikely to get their own campaign book. However, if you are a fan of the Battlegroup rules, and are interested in a new theatre to collect and game – then this book needs to be on your shelf.