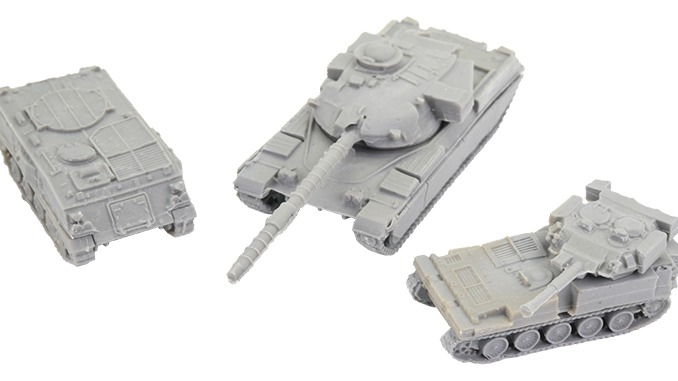 Cold War goes hot gaming in the 1980s. This is where my wargame journey started when I spied the collection of a neighbour while being babysat by his mother. Eleven year old me was very excited to see the huge amount of tanks he had on neat little bases. It is a period I have wanted to game for a long time; Battlegroup Northag is going to give me the chance to do so. Especially seeing as I have two starter armies sat in front of me; British and Soviet.

Both armies come in a small cardboard box containing the sprues. The covers have a great retro feel to the art; I initially thought they were test printings but I now think it is deliberate and I’m a fan. The sprues contained within are made with Ultracast, which is a new material from Plastic Soldier Company. This seems to be a plastic that can be injected into soft moulds rather than the steel ones of traditional plastic figures. The box art claims you can paint these without undercoating, that can be left for someone else to test out. I will be undercoating mine. The sprues do not seem to have any mould release residue on them but I will be washing them anyway.

The British box contains four Chieftains, four FV432, two Scorpions or Scimitars, and 34 infantry. All are produced in 10mm scale which, judging by the infantry, is measured from ground to eye level. The vehicle detail is good without being very crisp; the Ultracast is softer than traditional plastic and it seems this is softening the edges a little on the smaller details. Given the scale this is not really an issue but be aware of it. It affects the infantry more so but once these are painted and based no one will notice unless they look very closely.

Each Centurion is formed of four pieces; two tracks, main body, and turret. There is a choice of two turrets, the standard and the extra armour Stillbrew variant. I am not sure which is which so I need to check up. The Scorpions are the same set up with the turret allowing the Scorpion or Scimitar variants. The barrels of the ones I have were not completely straight so some treatment will be needed. They do lend themselves to magnetising to give you more options if you are so minded. The FB432 comes in three parts, two tracks and one main body, and is handily marked on the underside of the hull with its designation. I would have liked the other armour to have the same as I am not au fait with armour of the period.

The Soviet starter army is much larger; ten T-64, ten BTR-60, two BRDM-2, and 108 infantry. Unlike the British there are no different turret options for any of the armour. This lack of choice means I would suggest gluing the turrets on the Soviets so that you do not lose them. The T-64 goes together in the same way as the British Centurion, consisting of two track pieces, a main hull, and a turret.

The BTR-60 and BRDM-2 are different as they are wheeled vehicles. The BDRM-2 has four individual wheels that need to be attached, along with a small turret. The BTR-60 has two, four-wheel pieces that attach; do split the wheels apart! They go in as a section, the ones I have are going to need some heat treatment as the wheels are not straight. From the side they look alright but from beneath you can see where they are slanted.

The tracks for the British armour only go on one way so fitting is easy. The Soviet ones can go on either side so you do need to make sure they are the right way round: the sprocket wheel, the one with teeth, goes at the rear.

The infantry I received had quite a bit of flash but this seems very easy to remove. So easy I used my fingernail at one point rather than any of my hobby tools to see if I could. And I could but hobby tools are a better idea for the job. However, when I did use my hobby tools the soft material bent out of the way, turns out a fingernail might be the best tool for removing the flash. Plastic glue doesn’t seem to hold them together so you will need to break out the superglue to put things together.

The Soviet infantry have a lot of options and I need to do some figuring out what they are; there are definitely some RPGs, GPMGs, and other hardware.

Both sets are what they say they are, starter armies that will get you going. For a full game you will need some extra models for both armies as they are very limited builds as they stand of around 300 points. The flash is not insurmountable and easy to clean up. The figures and armour are good enough once cleaned, wonky barrels notwithstanding, and have a nice feel to them. Cleaning will be a chore and sometimes won’t be worth the effort. I would have liked an instruction sheet for the infantry so I can tell what the various figures are (I still have not identified which are the snipers). Overall decent starters that provide the base of your chosen Cold War Army.