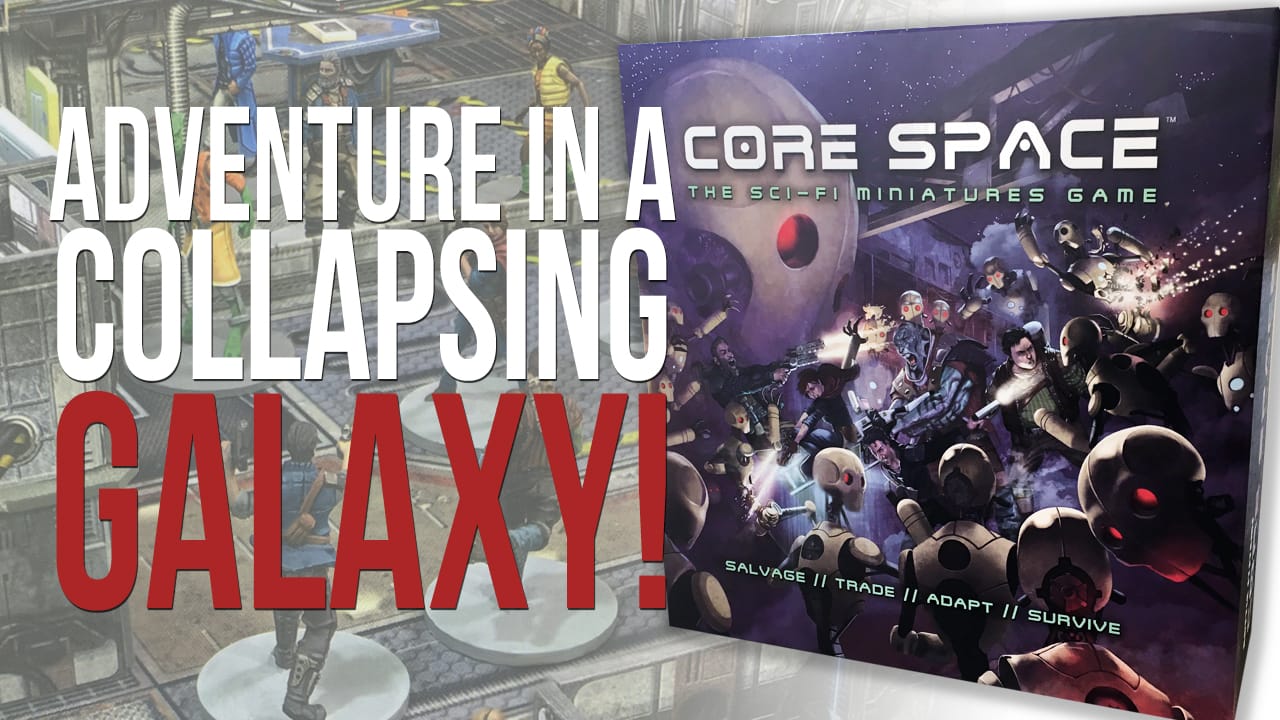 Battle Systems have some great card stock terrain that is fully printed in colour. However, they have now expanded into the world of boxed miniatures games. Core Space is a unique take on a sci-fi universe which draws from many sources but offers something different as well.

Core Space is a miniatures board game where a band of Traders attempt to salvage and steal whatever they can, against the background of a galaxy falling apart and the depredations of the Purge, a race of partially aware machines who attack planets and strip them bare of any and all resources.

Lifting the lid of the sturdy box with its great looking artwork, we come upon something you don’t see that often, a 2’ by 2’ baseboard mat but made in neoprene and printed in full colour. Already, you can see the aim of the company, to provide the highest quality components rather than stinting upon them.

Next come the game play components, and again, there is very little card in evidence. The turn and player trackers are in a solid plastic, the dice are colourful and have the symbols marked clearly, actually etched into each face of the dice, there are two colours of player markers and a great drawstring dice bag. There are also different coloured pegs for use with the tracker boards, and clips to aid in the assembly of the terrain, of which more later. The only card encountered so far are four cross pieces which fit together and a small deck of event cards.  Most of these components are held in a plastic tray, which is pretty sturdy in itself!

A box within a box is next, with some great artwork. Opening this box up, we find another plastic tray, this time with spaces for cards and plastic components, and then the all-important miniatures. There are 20 plastic miniatures in total, in three different colours. The grey miniatures represent 8 Traders, the light blue miniatures are 3 Civilians and the 9 fawn coloured figures are from the Purge. There are a mix of humanoid figures, some based upon the human race, others are aliens. The Purge miniatures include two larger robotic creatures. The miniatures average between 28 and 35mm from foot to eye.

The rulebook comes next, a 105-page softback book. The main components are documented, and instructions for the creation of the gameboard and terrain is shown. Every aspect of the game is covered, from the use of the Character Dashboard to the Hostility Boards. The book is full of useful diagrams and explanation, is very clearly laid out and is printed in full colour. The rules seem simple to follow, but full of the type of complexity that makes the game playable again and again. The rules provide for a number of different scenarios or ‘missions’, plus campaign play, wherein players can create a crew of their own, then track their progress over the course of a number of adventures. There are also sample Trader crews which correlate to the miniatures in the box, allowing you to get playing straight away. Finally, comprehensive reference sheets may be found, allowing for use during a game.

The punchboards of tokens and character cards are next, the latter designed to fit into the plastic holders provided. The terrain is next, requiring assembly but covering everything from ‘room scatter’, various chairs, consoles and other items, plus girders and walls for placing on the gameboard, including cyberpunk-style walls. These are placed into the clips provided to make the various layouts for each of the missions. These are double-sided and printed in full colour on some excellent quality card.

The quantity and quality of gaming materials in this product are fantastic. Everything included is designed to last, and provide for hours of great gameplay. This product is a real treat for gamers, and well worth a closer look.