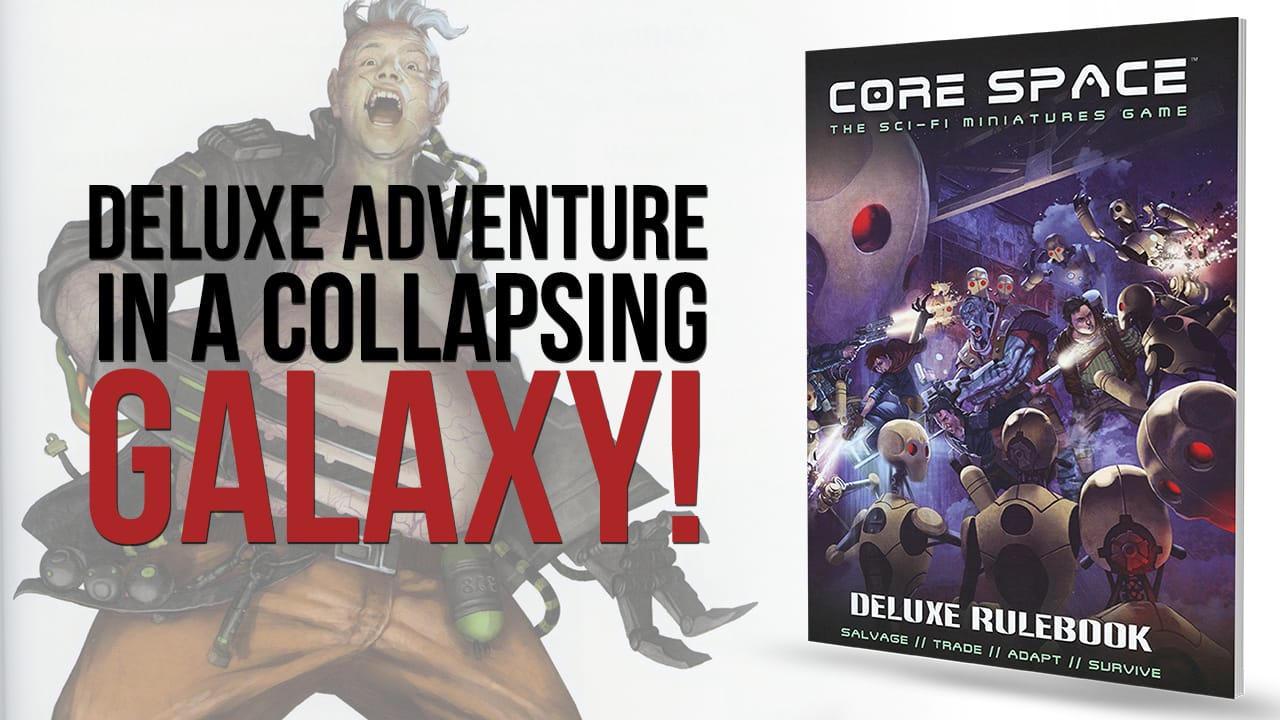 After reviewing the boxed set of Core Space from Battle Systems, we were so impressed  by this unique take on a sci-fi universe that we’d thought we’d take a closer look at the rulebook, in particular the ‘standalone’ deluxe hardback version.

Core Space is a miniatures based game where a band of Traders attempt to salvage and steal whatever they can, against the background of a galaxy falling apart and the depredations of the Purge, a race of partially aware machines who attack planets and strip them bare of any and all resources.

The deluxe rulebook consists of a 177-page hardback book. The gameplay is intended to be part roleplay, part tabletop miniatures game, with the focus upon creating a series of narrative adventures or ‘missions’.

The book outlines the components of the game, explaining them in plenty of detail. Although this may seem like a ‘component heavy’ game, many of these could be adapted or made from whatever the gamer may have in their collection. This is also true of the terrain, using either the excellent card-based, full colour items from Battle Systems or whatever one has available.

The book outlines the key concepts behind the game, explaining the rules using plenty of suitable examples, both written and visual, and introducing the various phases of a turn. The standard Line of Sight, Ranged and Close Combat Weapons are covered, and there is a very useful double-page spread of how to set up a game. Each turn or game ‘round’ has 5 basic phases, Hostility, which is affected by the impact of the Purge, and has an effect on the Event Cards drawn at random,  the Trader Phase where the players activate one character model at a time, moving around the table until all models have acted. Players choose from a number of possible actions, with only two for some characters and more for others, as shown on their cards.

The Purge Phase is next, the main threat in the game universe, the semi-sentient mechanical creatures whom seek to devour all resources. A unique feature of the rules is an AI system whereby the Purge and other Non-Player Characters can be managed, allowing players to work co-operatively or solo gaming to take place. A full example is shown, with visual and textual explanation. The different types of Purge ‘robots’ are outlined, before the rules explore other types of NPC characters for their own Phase.

The various types of missions are explored, with both examples to use and full instructions on how to choose or create their own. The various styles of play are offered and explored, which demonstrates just how useful the rules are for any type of gaming experience. There are some great maps for the missions, aiding the gamer with designing their own missions, with objectives and more.

After all the rules and other details, the book deals with how to put together a crew, and how to venture through a series of missions, along the way advancing in abilities or wealth, using and maintaining your Trader’s spacecraft, and the different aspects of an adventure. A sample campaign is offered, with a series of adventures to take part in.

An additional section contains Advanced Rules to add additional layers to the gameplay, defining aspects of the terrain in more detail, playing the game on a larger set-up, additional movement options, expanding the difficulty level of a mission, and even how to generate one’s own characters for use with the game. An overview of the Core Space universe makes up the remainder of the book, complete with the outlines of some sample Trader Crews.

To aid with the set-up of various missions, the company offers a number of expansions to the game, whether the boxed set or the basic rulebook. Each expansion contains a set of adversary miniatures, a mission booklet, character datacards, equipment information and a number of pieces of card terrain that help to create the setting. These are an excellent idea and allow gamers to dip into the different facets of the game universe.

This is a detailed but easy to use rulebook, which contains pretty much everything the gamer could need to launch themselves into a whole new galaxy of adventure. Full colour tokens and terrain, top quality miniatures and a whole variety of gameplay options make this a set of rules any sci-fi skirmish gamer should take a closer look at.