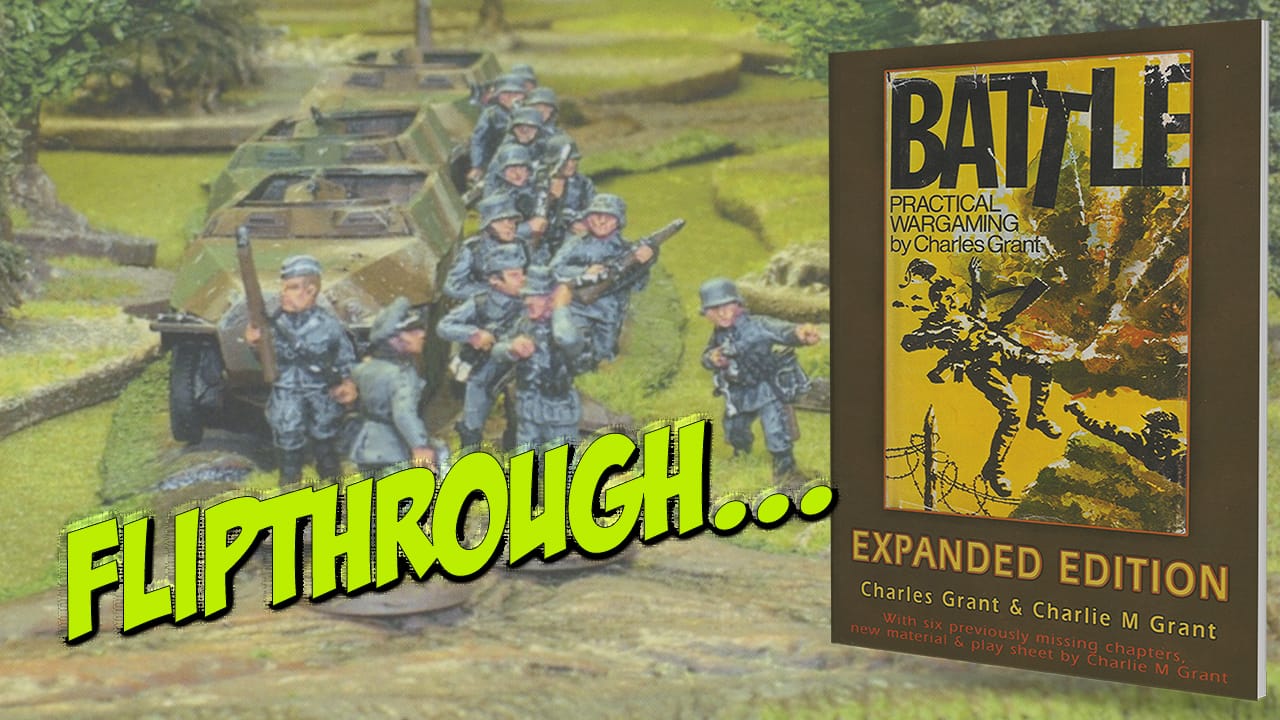 Back in 1970, Charles Grant wrote and had published Battle – Practical Wargaming, one of the first guides to tabletop wargaming exclusively for World War Two. This new 2017 edition contains six chapters that were never previously published, plus new material by Charlie M Grant, the original author’s grandson and serving member of the Army.

The introduction from Charles Grant sets the tone for the whole book; the use of a conversational style from the outset makes this more of a shared experience than a trudge through endless tables and rules minutiae. Indeed, once we move onto the rules themselves, there is an introduction aimed at both beginner and veteran alike.

From the outset, the establishment of a ground scale, movement rates, use of weaponry and the role played by infantry is explained in a style that more modern rulesets often lack. This is refreshing in many ways, and the information provided is in just enough detail to inform rather than being dispensed with a heavy hand.

The rules for artillery and armour are remarkably short but provide not only clearly laid out charts for game play but also succinct explanations as to why the values a re what they are. This is in stark contrast to some modern sets of WW2 rules, which sometimes pluck arbitrary values out of the air with no real exploration.

The introduction of chance through the classic medium of dice is explained, followed by the relevant charts and tables to govern the ‘Strike’ value of anti-tank weaponry versus the ‘Defence’ value of an armoured vehicle.

Ranges are nicely defined into ‘bands’, with the Strike value of a weapon being lessened the further away the target.

The bands seem realistic for the tabletop and, again, are explained in enough detail to justify them. The use of range sticks and protractors gives the game a different feel to the use of a tape measure – in a sense, you’re making more of an effort when you create your own gaming aids rather than buying them.

There is a really useful run through of a scenario involving armour, which is the suggested first part of the rules that should be played.

Being in essence an extended after action report, there are some simple to understand maps that will work to create a scenario. Having grasped the core concepts of the rules and played a few games using armour, the rules transition to the use of infantry weapons, from mortars and rifles to sub machine guns and hand grenades. Having introduced the ranges, strike values, and rules, there is then another AAR, which highlights the key rules and makes suggestions about response and counter response, again with maps to play the scenario out yourself.

Again, having established a set of basic, combined arms rules, there are layers that may be added, almost entirely optional at this point. These ‘advanced’ rules add communications, forward observers for artillery, infantry HQs, morale, etc. to make the tabletop gaming experience as ‘real’ as possible, plus there are examples of organization for units and a useful scenario to play through called ‘Reconnaissance in Force’.

This expanded edition includes six extra chapters that haven’t seen the light of day since their publication in the Meccano Magazine. These have practical advice regarding the role of terrain within the rules, the creation and usage of maps for game use, and a set of instructions on how to re-create the ‘ Reconnaissance in Force’ on the tabletop, plus a nice ‘fun’ chapter that deals with garden gaming.

The main addition to the rules beyond these ‘missing’ chapters is a playsheet created by Charlie M. Grant, a good summary of the main rules and including the main charts and templates.

This is a full re-print of a set of World War Two rules created at a time when authors helped the gamer into the setting and game, rather than leaving the reader to sort it all out themselves and then publish FAQ’s. Everything you need is here, written in an approachable style. The only quibbles for the modern market are the lack of colour photographs and the use of black and white images which have seen better days, plus the absence of page numbering in the new sections. Overall, this is still a user friendly book that is of use to those getting into the hobby or a new era.